Egypt enraged at Netanyahu over Gaza 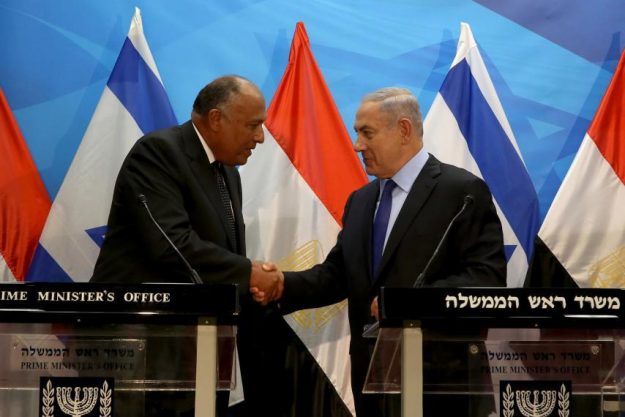 Egypt blames Prime Minister Benjamin Netanyahu for sparking the escalation on the Gaza border by sabotaging Palestinian reconciliation efforts. In other words, though Egypt has yet to join the condemnation of the slaughter, it holds Israel responsible for provoking the demonstrations. If true, it sheds a different light on claims that Israel is shooting in self-defence

Hamas’ demonstrations have been taking place along the border fence for over a month now. The number of participants may have dropped, but the violence has intensified, with many Palestinians getting hurt and even killed. The Israeli military is currently investigating the death of a 15-year-old boy who was shot dead April 21. Nevertheless, there is almost universal consensus in Israel surrounding the Israel Defense Forces’ (IDF) measures to prevent Palestinians from breaking through the fence. Apart from a few isolated voices identified with the far left, there is hardly any criticism of the IDF for using snipers to prevent people from damaging the fence. These snipers only fire under direct order from a battalion commander or officer of higher rank to neutralize situations in which the fence could be breached, since a breach would require the IDF to open deadly fire at hundreds or thousands of Gazans trying to break into Israel. Almost everyone agrees that there is no alternative.

This approach ignores that Israel’s political leadership did have another way available to it. According to senior sources involved in contacts between Israel, Egypt, the United States and the Palestinian Authority over the last two years, Israel should take part of the blame for Hamas having reached another dead end, which it is trying to break through with force. According to this view, an alternative existed, but Israel preferred to undermine it.

Israel could have moved the Palestinian reconciliation efforts forward. It could have encouraged the return of the Palestinian Authority to the Gaza Strip to manage affairs there, and this would have allowed for the gradual lifting of the closure. The result would have been an immediate improvement in the quality of life of the Palestinians living there and fostered a renewed sense of hope. According to sources familiar with these contacts, Israel promised Egypt that it would encourage and advance the reconciliation process. Evidence of this was even published here in Al-Monitor. A Western diplomatic source told Al-Monitor on condition of anonymity, “[Prime Minister] Benjamin Netanyahu himself promised [Egyptian President Abdel Fattah al-] Sisi that he stands behind the plan and will do everything he can to ensure its success.” The source added, “Gen. Khaled Fawzi, then-director of the Egyptian General Intelligence Directorate, heard this promise directly from Netanyahu and other Israeli officials on more than one occasion.”

But then the process began. At its most critical stages, Israel underwent a transformation. Instead of encouraging Palestinian President Mahmoud Abbas, it intimidated him. Instead of helping, it undermined the process. “Not only did Netanyahu have a change of heart,” said the official, “he managed to change the American administration’s position, too. After [US envoys] Jason Greenblatt and Jared Kushner heard details of the plan from Sisi and expressed their agreement with it, the US realigned itself with the Israeli policy. It did not lift a finger to ensure the reconciliation’s success, and thus ensured its collapse. This turned Hamas Gaza chief Yahya Sinwar from a potential pragmatist into a much more extreme figure. Hence, Sinwar no longer supported reining Hamas in and returning the Palestinian Authority to Gaza. He has lost hope in the process and must now prove yet again that he is fit to head the resistance.”

The Egyptians poured vast amounts of energy, creativity and money into the reconciliation process. One diplomatic source revealed to Al-Monitor that the Egyptians trained a group of 1,200 young Gazans in Egypt for an extended period to serve as a popular base for the new approach, which rejects extremism in favor of pragmatism.

The Yahya Sinwar who was released from prison in Israel and returned to Gaza was not the same violent radical and thug that left. “Everyone has been surprised by Sinwar’s transformation since he came back. He was now more practical and moderate. He now preferred reconciliation with Abbas and the return of the Palestinian Authority to the Gaza Strip and even hinted at a more advanced stage in which the Palestinian Authority would also take control of security matters,” said the diplomat.

At this stage, there was a dramatic shift in the Israeli position. The diplomatic source described a meeting in Cairo with the head of Palestinian Intelligence in the West Bank, Majid Faraj, who said that Sinwar agreed to allow 3,000 armed Palestinian policemen from the West Bank into the Gaza Strip. Faraj then complained that it was Israel that was preventing the armed Palestinians from crossing through its territory. It was a critical balancing point on which Sinwar tried to prove his seriousness about giving up his monopoly over the control of weapons in Gaza. Israel undermined it. When Hamas offered to provide the Palestinian Authority weapons from the Hamas armories in Gaza, it was already too late.

At the same time, Israel sent a clear message to Ramallah: Don’t believe Hamas. They’ll slaughter your people in Gaza just like they did last time. What is happening now will end in disaster.

“And so,” said the senior diplomat, “when the moment of truth for the entire process arrived, Israel foiled it. Instead of instilling a skeptical Abbas with the courage and assertiveness he needed, it spread fear and dampened his enthusiasm.”

As was recently learned, the collapse of the reconciliation process was also a severe blow to Egypt’s prestige and a strategic disaster for Sinwar himself. He has accumulated quite a few enemies in Gaza since deciding to change his spots and promote a more pragmatic approach. “That is precisely the reason that we are seeing the situation heat up again now,” said the diplomat. “Hamas has had another change of heart because it sees no way out of the situation apart from another explosion. It could have been prevented,” he added.

The riddle that remains is why Netanyahu agreed to go with the flow in the beginning only to double back later. One possible explanation is that Netanyahu is convinced that Sinwar himself will undermine the move. The intelligence community was very surprised to learn about Sinwar’s transformation. The predominant theory in diplomatic circles involved in efforts to turn down the heat on the crisis in the Gaza Strip is that at first, the Israelis could not believe that he was cooperating with the reconciliation efforts and upon confirming that he was, they had no choice but to undermine those efforts themselves.

And what about Egypt? “President Sisi is very disappointed with Netanyahu,” an Israeli security source close to these contacts told Al-Monitor on condition of anonymity. “This is the second time that Netanyahu stabbed him in the back. The first was when he added [right-wing Yisrael Beitenu head] Avigdor Liberman to his government instead of [center-left Zionist Camp leader Isaac] Herzog. But Sisi doesn’t have the privilege of a chillier relationship with Israel right now, so he prefers to sit quietly and let off steam.”