Original title: No, Crimea is not ‘suffering reign of terror’ under Russian rule

U.S. Assistant Secretary of State Victoria Nuland last week told an influential group of U.S. senators* that due to Russian actions in Ukraine, “Crimea and parts of eastern Ukraine are suffering a reign of terror.” 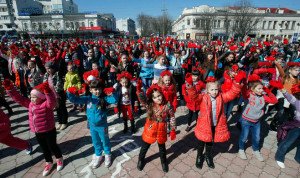 Ceremonies in Crimea, including here in Simferopol, mark one year anniversary of Crimea rejoining Russia, photo by Maxim Shemetov, Reuters 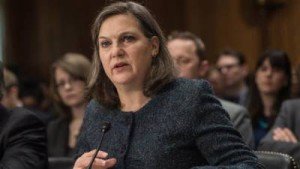 Nuland, who spearheads White House policy in Eastern Europe, is persona non grata in Russia and Crimea, which Moscow annexed last year. Perhaps because she has not talked to anyone who actually lives in Crimea, the evidence she gave to the senators was wrong.

Fear may be rife in separatist eastern Ukrainian regions that have endured months of heavy fighting and more than 5,000 deaths, but Crimea is not suffering from either war or terror.

Three reporters from The Moscow Times have visited Crimea in the last month. More than fear, the vast majority of Crimeans feel relief that the region has escaped the violence engulfing eastern Ukraine and satisfaction that they no longer have to live in Ukraine.

The feature of local life most often stressed by Crimeans is peace, not terror. They see the conflict between eastern Ukrainian separatists and the Ukrainian army and think they dodged a bullet. Far from an aggressor, Russia to them is a protector.

Western sanctions and a Ukrainian economic blockade have driven price inflation and damaged Crimea’s vital tourism industry by cutting the number of foreign visitors. But massive Russian subsidies pouring into Crimea have offset price rises for many by sharply raising pensions and state employee salaries. Ukraine is meanwhile suffering an even deeper economic crisis.

Nuland’s use of the word “terror” conjures up images of Stalinist purges. Nothing similar exists. Those who do not want to live under Russian rule are free to leave, and many have.

Fleshing out her testimony in Washington, Nuland said, “Crimea remains under illegal occupation and human rights abuses are the norm, not the exception, for many at risk groups there.” Tatars, Ukrainians, gays, lesbians, journalists and others are at risk of persecution, she said.

There is some truth in this — Russia has a weak culture of minority rights and an often heavy-handed bureaucracy. But while many in these communities are disappointed, few, if any, are terrified.

The vast majority of Crimeans are Russians or half-Russians, and most of these feel less oppression and less terror than when they were governed from Kiev — another culture with a weak understanding of minority rights. This majority has felt impinged by a decade of nationalist rule in Kiev that aimed to make them Ukrainian, and has felt threatened by the eruption of violence in Ukraine last year.

While sounding off about terror, Nuland ignores the fact that Crimea’s accession to Russia reflects the desires of a majority of the population. The form of Crimea’s change of sovereignty may be illegal and deserve condemnation, but the substance is pure democratic justice.

This is a point rarely made in the West. Instead, Nuland-style demagoguery is stoking hawkish public opinion and driving aggressive policy in the West toward Russia, a nuclear superpower.

And while Nuland may not be talking to residents of Crimea, she is at the center of U.S.-Russia policy and the debate on arming Ukraine. The people who will make those decisions are relying on her for information and advice.

And read more on how the propaganda machine over Crimea works:
* Victoria Nuland’s testimony before the Senate Foreign Relations Committee in Washington DC on March 10, 2015
Excerpt: “Which brings me to my second point—even as Ukraine is building a peaceful, democratic, independent nation across 93% of its territory, Crimea and parts of eastern Ukraine are suffering a reign of terror. Today Crimea remains under illegal occupation and human rights abuses are the norm, not the exception, for many at-risk groups there—Crimean Tatars, Ukrainians who won’t surrender their passports, journalists, LGBT citizens and others.”

Crimea one year after Russia referendum is isolated from world, NBC News, March 16, 2015

Crimea still erasing its Ukrainian past a year after Russia’s takeover, The Guardian, March 13, 2015

The liberal attack on the Nemtsov murder investigationBackground, Russia 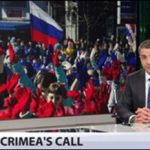