Ecuador: Moreno’s government sacrifices the poor to satisfy the IMF 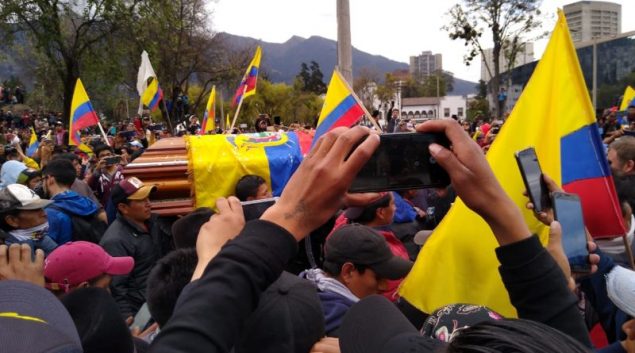 Ecuador’s President Lenin Moreno has been cutting government spending since signing an Extended Fund Facility (EFF) agreement with the International Monetary Fund (IMF) in February of this year. This policy has benefited multinational corporations, the banks, and in general, powerful economic groups at the expense of the middle and working classes, who are being pushed toward poverty and extreme poverty.

Ecuador’s President Lenin Moreno has been cutting government spending since signing an Extended Fund Facility (EFF) agreement with the International Monetary Fund (IMF) in February of this year. This policy has benefited multinational corporations, the banks, and in general, powerful economic groups at the expense of the middle and working classes, who are being pushed toward poverty and extreme poverty.

In the context of the IMF negotiations the administration issued a law ironically called “the Organic Law to Foster Productivity, Attract Investment, and Create Jobs, Stability, and a Balanced Budget,” which has been in force since August of 2018. The law brought neoliberalism back to the country by instituting a policy to reduce the budget deficit and national debt, which have now become the top priorities. The law contemplates the collection of interest, fines, and other charges for outstanding obligations with several government institutions: the Internal Revenue Service (SRI), decentralized autonomous governments, the Office of the Superintendent of Businesses, the Ecuadorian Institute of Credit for Education and Scholarships, state enterprises, and even the Ecuadorian Social Security Institute (IESS).

On the day that the Law entered into force the private sector owed the government US$4,291,200,00 (almost $4.3 billion)—for unpaid income tax alone—not counting interest. This figure is higher than the total credit granted by the IMF. The IMF loan is for $4.2 billion and will be paid in installments if the country is deemed to be complying with the IMF conditions. 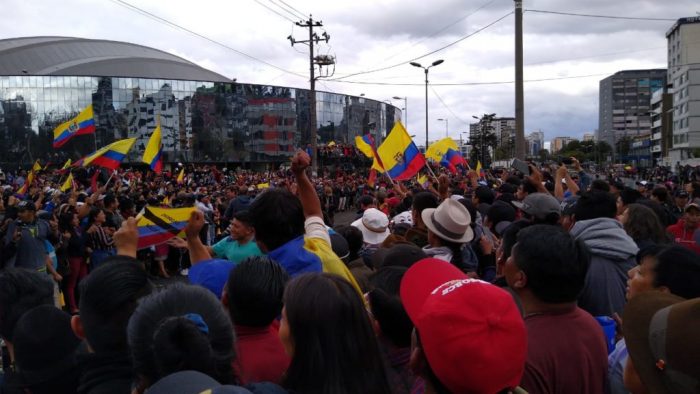 The protests in Ecuador against the government of Lenin Moreno have left five dead and hundreds wounded and arrested. The photos in this article cover the large funeral procession of Inocencio Tucumbi, Indigenous leader assassinated during the confrontations between protesters and the police forces of the government. (Photo credit: Santiago Villacis)

Once these debts were collected, the SRI reported that US$1.25 billion[2] had been taken in. However, it did not explain what happened with the rest of the US$3 billion, which is twice the amount that the government estimates it will save from the fuel subsidies it eliminated as of October 1, 2019—US$1.3 billion[3].

The total amount of debt collected by other public entities included in the aforementioned law is not known, nor is there any information on how much the many tax exemptions included in the law cost the government. There has been an utter lack of transparency in both the approval of the law and its true scope.

The legislature passed this law without requesting even the basic information outlined above. It did so with the votes of Alianza País (the movement started by former President Rafael Correa, with only the votes of the Moreno supporters in the Assembly after the defection of all of Correa’s supporters), and with the Social Christian Party.

While the most powerful economic interests in the country have been enjoying debt reduction and tax exemptions, the current administration has been punishing the middle and working classes by cutting government spending under the agreement signed with the IMF.

IMF CONDITIONALITY IN MOU AND LETTER OF INTENT

The Memorandum on Economic and Financial Policy gives details about “the public policy program for the next three years,” which includes targets for reducing the fiscal deficit and national debt. These are much more drastic than the targets the IMF set for Argentina.

Target for reducing the debt to GDP ratio:

Target for reducing the budget deficit:

In order to reduce the debt burden and budget deficit, under its agreement with the IMF the government has been cutting spending by laying-off government workers, eliminating subsidies, and drastically cutting programs. Cumulative reductions since 2016 amount to 75%, from US$6,1 billion[6] in 2016 to US$773 million as of July 2019, which amounts to approximately US$1.5 billion in 2019.

The last package announced by President Moreno on October 1, 2019 included the elimination of gasoline and diesel subsidies, causing their prices to go up 24% for gasoline (from $1.85 to $2.30), while premium diesel went up 119% (from $1.037/gallon to $2.27/gallon)[7]. The government expects this measure to bring in additional funds of $1.3 billion/year.

In addition to the elimination of these fuel subsidies, the announced package includes a broad array of measures, including: new tariff reductions on raw materials and capital goods imports for the agricultural and industrial sectors; reduced import taxes on vehicles priced under US$32,000; elimination of advance payment of income taxes by companies; elimination of taxes on technology imports (cell phones, computers, and tablets); 50% tax cut on foreign exchange being used to import raw materials and capital goods; 20% cut in compensation for government employees; increase in the number of beneficiaries of the human development bonus; and loans at 4.99% interest under the Own Your Own Home plan—just to mention some of the bigger programs[8].

Elimination of the fuel subsidies is what is hitting the poor the hardest. Ecuadorians have already been impacted by a stagnant economy and competition from imported goods, especially from neighboring Colombia and Peru whose currencies have been devalued in recent months. The border provinces, particularly El Carchi on the border with Colombia, have been clamoring for government relief from a deep economic crisis, even resorting to ad hoc measures sometimes.

Meanwhile, government spending on agricultural development in the first half of 2019 was a paltry US$53 million, or US$106 million annually—just a quarter of the US$422 million the financial system collects for every 1% of interest it charges customers. This is surprising given that the agricultural sector is such an important source of employment, accounting for 28.3% of jobs in the country.

Ecuador is in dire need of far-reaching financial reforms, including drastic cuts in interest rates—rates which everywhere else in the world go down when there is a need to stimulate the economy and boost production.

The policies the government has implemented under the IMF agreement have brought the economy to a standstill. The IMF itself predicts a 0.5% reduction in GDP this year[10]. Unemployment has continued to rise (only 37.9% of the economically active population has adequate employment[11], that is, with salaries above minimum wage and benefits, as of June 2019). The poverty rate has risen from 35.3% of the population in December 2014 (5.6 million poor people in a total population of 15.9 million), to 43.8%[12] in June 2019—that means 2 million more people have fallen into poverty, for a total of 7.6 million Ecuadorans living in poverty out of a total population of 17.3 million people.

The IMF policies are still geared toward serving the interests of creditor countries and toward reducing the national debt. The objectives are as follows:

The policies adopted under IMF austerity packages do not resolve fiscal crises. Rather, they heighten them, forcing privatizations and the opening of the economy to foreign capital. Meanwhile, the structural problems in the intervened countries grow worse. The labor market becomes precarious, poverty and extreme poverty rise, there is a greater concentration of wealth, and the economy de-industrializes and reverts to raw materials. This encourages an intensification of mining and fossil fuel extraction—extractivism—with its multiple harmful impacts on the environment and a deterioration of the living conditions of the people living in countries where these policies are imposed.

In the case of Ecuador, the economic policies implemented by the government of Lenin Moreno are in perfect conformity with the IMF’s neoliberal recipe. This context explains the huge social mobilization this past week, especially of Indigenous groups and other sectors impacted by the elimination of gas and other energy subsidies and the government’s repressive response to the civil outcry. President Moreno’s approval rating has reached a historic low of 30%[13], and as this article goes to press, the political repression of the State security forces has resulted in egregious social costs, with five deaths[14], hundreds of wounded and almost five hundred persons arrested[15].

Wilma Salgado holds a Doctorate in Economics, is former Minister of Economic Affairs of Ecuador and an expert on fiscal affairs under various administrations.

Translated from the original Spanish version by Jill Clark-Gollub.