Ecuador: Lenin Moreno and the CIA against Andres Arauz 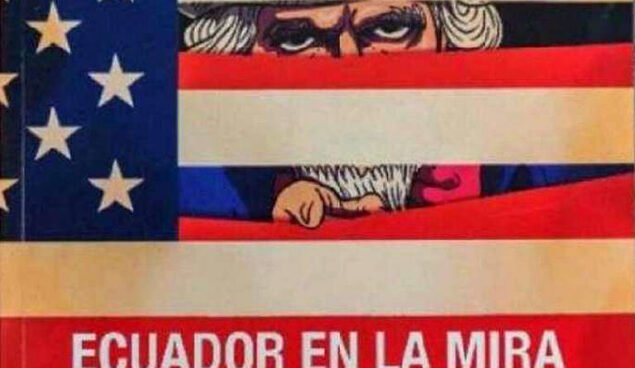 The second round of the Ecuadorian election between the candidate of the pro-Correa citizen revolution Arauz and the banker Lasso is approaching, and things are accelerating in the axis formed by Lenin Moreno and the United States, with its intelligence services at the forefront.

The second round of the Ecuadorian election between the candidate of the pro-Correa citizen revolution Arauz and the banker Lasso is approaching, and things are accelerating in the axis formed by Lenin Moreno and the United States, with its intelligence services at the forefront.

Recently, a secret meeting took place in the Galapagos Islands between the Ecuadorian and US governments. On the Ecuadorian side, President Lenin Moreno, Vice President María Alejandra Muñoz, and the Secretary-General of the Cabinet of the Presidency Jorge Wated took part; on the US side, its Ambassador Michael Fitzpatrick and senior US military commanders.

In this meeting, Moreno thanked the United States for the support given by the US Embassy in Quito, to submit to polygraph all his government officials and Ecuadorian diplomats in Washington who may have leaked the information we made public on February 4 about the destabilizing plans to prevent the victory of Andrés Arauz and Correa’s supporters.

Likewise, Cabinet Secretary Jorge Wated was instructed to monitor the email and social media accounts of all officials in the Carondelet, the Ecuadorian government palace.

For his part, Ambassador Fitzpatrick gave Lenin Moreno a secret report that gives Andrés Arauz a 20-point lead over banker Lasso, based on analysis by US intelligence agencies.

It was also agreed to remove Foreign Minister Luis Gallegos from the Cabinet, as he opposed Moreno-Fitzpatrick’s orders to escalate the diplomatic conflict with Buenos Aires. Gallegos was supposed to draft a note of protest to his Argentine counterpart over Alberto Fernández’s statements about Lenin Moreno. But the real objective was to strain relations between Ecuador and Argentina, due to the sympathies that both Rafael Correa and Andrés Arauz have for Alberto and Cristina Fernández.

Also, at the urging of several US senators, Lenin Moreno was asked to get rid of former Secretary of the Presidency Juan Sebastián Roldan for allowing Arauz’s victory in the first round and not implementing all the measures agreed with the Colombian government to link Correa with the ELN guerrillas.

For her part, former Minister of Government María Paula Romo insists on preparing Moreno’s departure, using an alleged heart condition as a justification, in order to later announce from the US, Moreno’s resignation.

For weeks now, in the early hours of the morning, the evacuation of classified information and money belonging to Moreno and his family has been taking place in the Carondelet, as well as the destruction of sensitive information by trusted officials of the current government.

It is in the Carondelet itself where US Ambassador Fitzpatrick has a permanent office, very close to the presidential office. And it is in these corridors where, given the imminent deterioration of the national situation, a Crisis Committee is being considered to lead the country, made up of María Paula Romo herself, Vice President María Alejandra Vicuña, the OAS, and Ambassador Fitzpatrick.

Meetings also continue to be held via Zoom led by Romo to analyze the situation in the country. Lenin Moreno, US Senators Marco Rubio, and Robert “Bob” Menendez, and State Department official Martha Constanza Youth are taking part.

Also in March, meetings were held with public and private media executives and members of the Communications Secretariat (SECOM). The objective was to draw up a media strategy for the second round of elections, with instructions to create a national media campaign that would reduce the chances of Correa’s supporters. The main accusations are that Arauz will turn Ecuador into a new Venezuela, the financing of the Correa campaign by Colombian guerrillas, and the alleged corruption of the Correa campaign. To this end, they hired 250,000 fake Twitter accounts.

In a complementary manner, Lenin Moreno analyzed with the Drug Enforcement Agency (DEA) and the National Police how to link aerial and maritime drug trafficking activities, recently detected on Ecuador’s borders with Colombia, with Arauz’s campaign. This with the aim of challenging the elections and preventing the April 11 election to take place.

Another avenue explored these days by Lenin Moreno, in conjunction with the national coordinator of the Pachakutik movement, Cecilia Velázquez, is to use the demonstrations and the request presented to the Electoral Disputes Tribunal to prevent the victory of Correism.

A call was also made for this movement to vote null and void in the second round on April 11, although within Pachakutik there are members who do not share Yaku Pérez’s mercenary positions, reject the Yaku Pérez-Lasso-Moreno alliance, especially the alliance between Yaku and the US Embassy, and prefer to support Andrés Arauz. In recent hours the Shuar nationality (Sucumbíos province) has decided to support list 1 headed by Arauz.

On April 11, the future of Ecuador is at stake: on one side, the banker Lasso, supported by Lenin Moreno, the US Embassy, and the right-wing indigenous bureaucracy; on the other, Andrés Arauz and a project of social justice based on the citizens’ revolution promoted by Rafael Correa.

Once the coup d’état in Bolivia has been defeated, it is time for Ecuador to rejoin this new phase of epochal change, and the new progressive cycle led by the Argentina of Alberto and Cristina Fernández de Kirchner, and the Mexico of López Obrador.

Katu Arkonada (Barakaldo, 1978) has a degree in Economic, Social and Cultural Rights and Public Policies. He has been an advisor to the Vice Ministry of Strategic Planning, the Legal Unit Specialized in Constitutional Development and the Foreign Ministry of the Plurinational State of Bolivia.

Headline photo: Caption: Ecuador in the sites of the US