Contrary to my expectations — and those of most other observers — the situation in eastern Ukraine has not so far spiraled into renewed war. 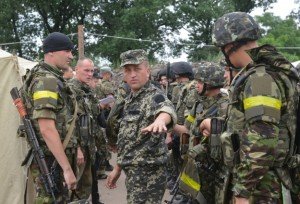 The reason for this is the deteriorating financial situation in Ukraine itself. Despite pressure from the IMF, talks between Ukraine and its private creditors remain deadlocked. This has led some of the ratings agencies to predict that Ukraine will fall into formal default this month.

The IMF’s indication that it would maintain its support for Ukraine has simply triggered a demand from the Russians that the next $5 billion tranche of IMF funding Ukraine should be used to repay the $3 billion Ukraine owes Russia, which is due for repayment this year.

It seems that the IMF’s staff is now increasingly leaning to the Russian view that this debt is indeed public debt. If so, then unless the IMF Board is willing to overrule the opinion of its own staff – which would be extremely controversial and might have serious legal consequences, Ukraine might shortly find itself cut off from private lending and in receipt of only limited funding from the IMF.

As for other alternative sources of Western funding, the EU’s commitment to provide Greece with a third 86 billion euro bailout further reduces the funds available for Ukraine.

It is nonetheless likely that it has been the need to bring the negotiations with the IMF and with Ukraine’s private creditors to a successful conclusion that has been the key factor in deterring Ukraine from resuming the offensive in eastern Ukraine. Back in the winter the IMF warned that any program to support Ukraine would fail in case of a renewal of the war, which all but confirmed that the IMF would halt its programme if the war resumed. With Ukraine becoming increasingly dependent on the IMF as alternative sources of external funding are closed off, this has become a major obstacle to a renewal of the war.

None of this however is to be taken to mean that the situation in eastern Ukraine is stable.

As predicted, the Ukrainian government has reneged on the commitments it made in Minsk. It refuses to negotiate with the leaders of the Donetsk and Lugansk People’s Republics, whom it continues to call terrorists. It has maintained the economic blockade.

There has been no negotiated law granting special status, no elections held in accordance with such a law and no discussions for a new constitution. On all these questions Kiev has purported to legislate unilaterally, imposing on the Donbass its own conceptions, which continue to reflect its unitary ideology.

Though there has been no general offensive, there is also no peace. Shelling of the Donbass towns continues at various levels of intensity and fighting between the Ukrainian army and militia units repeatedly takes place.

Meanwhile, much as he did before the resumption of the fighting in January this year, Poroshenko has again been bragging about the revival of the Ukrainian army, with claims that the number of Ukrainian troops on the front line has once again been brought up to 60,000 – which was roughly their number at the start of the offensive on 30th June 2014.

These claims, understandably enough, cause great alarm and are scarcely compatible with a sincere desire for peace. They are in fact as likely to be untrue as were the identical claims Poroshenko made before the resumption of the fighting in January. The reported mutiny of an entire Ukrainian tank battalion is almost certain to be a better reflection of the true state of the Ukrainian army than Poroshenko’s boasts.

In the absence of the negotiations envisaged by the deal done in Minsk the Donetsk and Lugansk People’s Republics exist in limbo – under blockade, facing current shelling, without a proper legal status and without full control of the territory they claim.

The Ukrainian government for its part cannot bring itself to recognize or accept the separate identities of the Donetsk and Lugansk People’s Republics, but lacks the means to suppress them. The situation is extremely unstable and very dangerous. 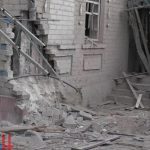 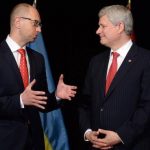 Loans and free trade deal by Canada with Ukraine are of little significanceDigest, Feature Articles, Ukraine