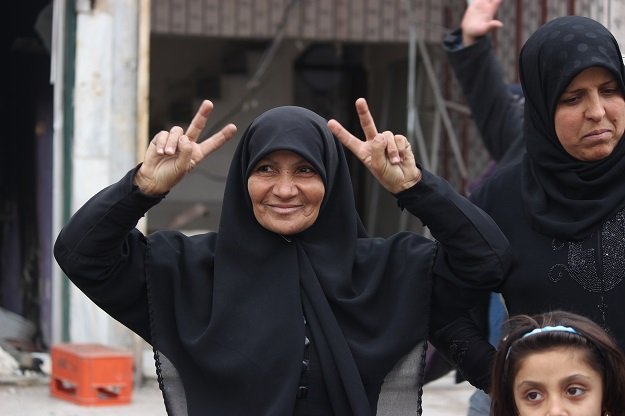 Hanano, East Aleppo, December 2016. A woman who had been liberated from terrorist occupation hours previously, gives the victory sign.

By Vanessa Beeley March 6, 2018. We reproduce this report from Vanessa Beeley as background to the missile strike on Syria. It deals with the parallels between East Ghouta and East Aleppo: NATO-member-state-sanctioned terrorist groups occupying the area, manipulation of the media, and the complete lack of objectivity in reporting in the Western media.

The parallels between East Ghouta and East Aleppo are unmistakable. The same media hysteria is being rolled out to protect the NATO-member-state-sanctioned terrorist groups that have been occupying the eastern suburbs of Damascus. Just as in East Aleppo, these western backed, armed groups have ruled civilians living under their occupation with a regime of fear and extremist oppression.

In a chilling interview with RT yesterday, Mother Agnes Mariam de la Croix described conditions in Eastern Ghouta. Mother Agnes has humanitarian teams on the ground in the occupied districts of Damascus, as she did during the terrorist occupation of East Aleppo. Mother Agnes describes the sniping and shelling of civilians trying to escape East Ghouta via the humanitarian corridors established by the Syrian and Russian humanitarian teams. She also talks about the frightening levels of gender based violence that is being carried out against women who are imprisoned in these areas and who are suffering appalling abuse at the hands of their militant captors. Mother Agnes describes young girls who are sexually abused in this way.

A recent report on the incidents of GBV across Syria also highlights the prevalence of these violations in the terrorist controlled areas of Syria.

None of this is mentioned in the daily corporate media one-sided reports that serve only to escalate tensions, close down peace talks and optimise the re-equipping & regrouping of the terrorist groups under attack from the Syrian Arab Army divisions that are forging a channel between the two strongholds in the eastern districts and advancing rapidly towards the final urban confrontation with the increasingly kettled guerilla groups, all of whom are affiliated to or controlled by Al Qaeda.

I spoke with friends last night in Damascus right on the East Ghouta frontlines. They told me that everyone had moved their cars to a safer place as the daily shelling had intensified dramatically. Most people are staying indoors as the shelling is now more random than ever and happening day and night. With typical Syrian stubborn resistance, these people have refused to leave their homes, fully trusting that the Syrian Arab Army will bring an end to the threat of death-by-mortar that these people have faced for the last five years. When I was recently visiting homes in this area, every house bore the scars of the rockets and mortars that had landed in their kitchens or living rooms. Most windows had lost their glass which had been replaced by acrylic sheet or transparent plastic tarpaulins.

Even Jeremy Bowen of the BBC finally reported on the terrible toll on civilians in Damascus city, many of whom have been maimed for life by the mortar fire from East Damascus:

Um Firas, in hospital in Damascus, waiting for surgery to reconstruct her jaw. Her flat was hit by a mortar fired from Eastern Ghouta. pic.twitter.com/IfnYDoc9C9

Last night I spoke to the Taylor Report (listen below) about the situation in Eastern Ghouta. I have created a video to accompany the report which includes photographs I had taken during the liberation of East Aleppo in December 2016. Civilians emerging from a five-year hell created for them by the US Coalition terrorist groups and their closely aligned media outlets (including the BBC, Guardian, Channel 4, CNN) who had lionised these murderous groups for the duration of the occupation of East Aleppo. I have also included images taken during 2017 and New Year 2018 that clearly show the repopulation of Aleppo since its liberation and the welcome return to its secular, multi-cultural society. Listen:

Vanessa Beeley identifies the extremist groups holing up in East Ghouta. They are known, variously, for putting civilians in cages as human shields against airstrikes, firing guided missiles full of bomblets into Damascus, and targeting schoolchildren just as they are leaving schools.

It’s a replica of what happened in East Aleppo. The same terrorist factions have occupied a city and held civilians as hostages. If Ghouta were a suburb of Toronto, and civilians were being daily massacred and targeted from that suburb, would we tolerate this? Or demand that our government and military forces release the civilians and dislodge the terrorists?

Look at Aleppo: After it “fell” [according to corporate media in the West – VB] to the government, it has been reunited with the country. Everywhere in the city is a hive of activity, as citizens restore their businesses, and put their homes back together. The largest city in Syria is coming back to life, just as Western ‘reporters’ lost interest in the city.

Meanwhile, the crimes that ‘rebels’ committed against Syrians in Aleppo are ignored. Western NGOs describe Al Qaeda terrorists as feminist freedom fighters, but Syrians know better. And they won’t be listening to Western humanitarians ever again. Beeley also dismantles the myths behind the current ‘ceasefire.’ Al Qaeda and affiliates never agreed to the ceasefire.”

On the show I mentioned an excellent report by geopolitical analyst and journalist, Elijah Magnier. Here are the excerpts from the article that I included on the Taylor Report:

“Eastern Ghouta seems to be a turning point and a most strategic fight for both Moscow and Damascus. Many reasons motivated this alliance to control it and take it away from the jihadists and rebels. On the other hand, such determination implies similar willpower in the opposite camp led by the US and its allies to prevent Ghouta from being liberated. This is the struggle between the two camps: one is determined to regain control of Ghouta and head towards the end of the war in Syria, and the other is equally determined to keep the war going.

These are the main reasons:

1. Ghouta was and still is considered one of the main areas offering air protection to Damascus against any air attack, possibly coming from Israel. The Syrian Air Defence system has maintained several anti-air missile bases in Ghouta for decades as a crossfire point around the Syrian capital.

At the beginning of the war, the Syrian Army demounted its air radar defence system in Ghouta just before it fell into the hands of the rebels and jihadists. The army didn’t manage to retrieve all missiles: some were destroyed by the new occupiers and others were used, managing to hunt down a Syrian jet.

As they recover Ghouta, the Syrian Army is preparing to deploy an advanced anti-air system, adding an important additional defensive element for the capital Damascus, against any air or long-range missile attacks or violations of its air space.

2. Eastern Ghouta is the weakest point in the vicinity of the capital Damascus. Actually, jihadists and rebels bomb the capital daily with dozens of rockets and missiles. This would make it impossible for any presidential or parliamentary elections to take place under such a continuous threat against the population. In fact, as long as Damascus is unsafe, any political proposal offered by Moscow to end the Syrian war would be handicapped.

3. Ending the war in Ghouta means putting an end to the presence of al-Qaeda (Jabhat al-Nusra aka Hay’at tahrir al-Sham) and Ahrar al-Sham (a group combining the Salafi Jihadists Takfiri and the Muslim brotherhood doctrines) around Damascus. This means, these jihadists will be forced to flee Ghouta for Idlib once they understand the battle to be lost. That will definitely create a push for an exchange with the inhabitants of the besieged cities of Fua and Kfarya, surrounded by Jihadists in north Idlib for over three years.

A similar exchange took place in December 2016 when jihadists and civilians were offered free passage from Aleppo in exchange for Fua and Kfarya civilians (of which dozens were killed while they were crossing, by a suicide bomber from Jund al-Aqsa, the organization close to the “Islamic State” (ISIS) which works alongside al-Qaeda in northern Syria).

4. Ending the battle of Al-Ghouta will free tens of thousands of Syrian soldiers so these can go directly to the southern city of Daraa and also liberate the border area with Israel. One of the Syrian Army’s main targets is expected to be the stronghold of “Khaled Bin Al Waleed’s Army” in the Yarmouk basin on the borders with Israel. This is composed of factions previously associated with ISIS (implying identical methods of operation and ideology), repetitively praised by the ISIS official media outlet A’maq and Al-Battar.”

To read the full article from Magnier, here is the link: Ghouta is the Most Important Battle for Syria and Russia, What Next?

Independent journalist, Eva Bartlett, has also produced a very comprehensive article on the situation in East Ghouta: UN Feigns Outrage Over Ghouta While Terrorist Rockets Rain Down on Damascus.

Taken from the article:

“As with Aleppo, a humanitarian corridor has been established to enable eastern Ghouta residents to leave the district. However, given that terrorists repeatedly shelled humanitarian corridors in Aleppo (including a corridor road I stood on in November 2016), holding civilians hostage, it is quite likely terrorists in eastern Ghouta will do the same.

Yet, in the end, the combination of humanitarian corridors and Syria’s offer of amnesty and reconciliation enabled the exit of terrorists and return of life in Aleppo. As of August 2017, over half a million displaced Syrians returned home, the vast majority internally-displaced.

In Madaya, al-Waer, Homs, and many other areas of Syria, the same deals as in Aleppo enabled the return of stability and life.

In addition to opening the humanitarian corridors, the Syrian army has dropped leaflets over eastern Ghouta informing civilians of designated safe exits for civilians to leave the district to safety in Damascus.

These are the types of actions the UN should be focused on and supporting, not repeating war propaganda that only confuses and prolongs the fight for peace.” 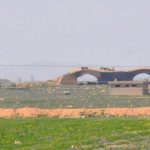 Now Mattis Admits There Was No Evidence Assad Used Poison Gas on His PeopleSyria
Renewing Marxism and other radical thought in the West amidst a troubling declineIs Russia imperialist?, Roger Annis, Russia, Syria