MOSCOW – Dutch government prosecutors investigating the downing of Malaysian Airlines Flight MH17 have reported that secret U.S. satellite intelligence they have been shown cannot be used in evidence in a prosecution in an international or Dutch court and that no evidence is currently available to charge anyone for the crime of firing on the aircraft, killing the 298 passengers and crew on board. The report, in the form of a five-page letter addressed to families of the victims, was signed by Fred Westerbeke, the Dutch official in charge of the investigation, and mailed last week.

Yesterday, the Australian government, whose federal police are participating with the Dutch in the criminal investigation, dissociated itself from the contents and conclusions of the Dutch government letter, despite the claim on the signature line by Westerbeke that he was reporting “on behalf of the Joint Investigation Team [comprising] Australia, Belgium, Malaysia, Ukraine and Netherlands”.

The Dutch letter has not been sent to Denise Kenke, daughter of Willem Grootscholten, one of the Dutch passengers killed on MH17. To date, she is the only MH17 family member to launch a lawsuit in the European Court of Human Rights or in any other court in Europe. She is charging the Ukraine Government with culpable negligence. The court has placed a secrecy order on the Kenke case, reassigned the judges on the case and refused to hear evidence on the charges against Ukraine. 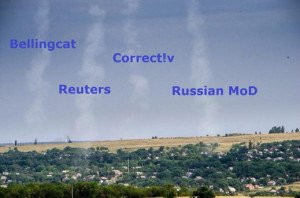 Westerbeke has told the selected recipients of his report there is “no video or film footage available from launch or trajectory of the missile”. He implies the investigators have now concluded that widely published photographs of the launch and the missile contrail in the sky are unreliable or false.

Westerbeke also charges that evidence from satellites and radar, which would be admissible in a court of law, have been withheld by the governments of Ukraine, the U.S. and Russia. For the full letter in Dutch, read this. For an English translation, click to open.

Westerbeke reported that radar evidence “is especially important for determining whether other aircraft were in the area.” This is a fresh suggestion from Dutch officials contradicting claims by the Dutch Safety Board and by the Ukrainian government that there were no Ukrainian warplanes operating in range of MH17 at the time of the attack. According to Westerbeke, no missile has been detected in the radar evidence gathered to date, but there may be other aircraft. “The radar does not see the missile. Although the JIT [Joint Investigation Team] does not have at its disposal primary raw radar data, it has been provided with the available (secondary raw and processed primary and secondary) radar data which is already sufficient information about the traffic.”

The Dutch prosecutor reports questioning Ukrainian air traffic control and radar operators who responded that “no primary radar data was recorded in Ukraine”. In response to Russian government claims that their radar evidence had been ignored by the Dutch Safety Board in its report of last October, Westerbeke reports that to obtain further Russian radar evidence, “the prosecution is discussing with the Russian authorities.”

Public presentations by the Russian Defence Ministry and commentaries by Russian military experts have suggested the evidence points to the shooting-down of MH17 by one or more air-to-air missiles fired by a Ukrainian air force plane. As of last week, Westerbeke said the JIT is lacking “conclusive and irrefutable proof.” It won’t have this, he added, for at least another six months. “For the second half of this year, the JIT expects to provide criminal evidence on what type of weapon and from where the MH17 was shot.” This statement suspends the evidence and the conclusion already accepted by the Dutch Safety Board, and repeated by an Australian coroner in an inquest last December, that the weapon was a ground-to-air Buk missile fired by Ukrainians opposed to the Kiev regime in the Ukrainian civil war.

Westerbeke admitted secret U.S. intelligence, including satellite images, “could potentially provide information on a rocket trajectory.” The secret images and hearsay about what they show are inadmissible in a court of law, Westerbeke acknowledged. He and Dutch intelligence agents are “now investigating in what form the U.S. state secret information can be used in the criminal investigation and what will be provided in a so-called official report to the Public Prosecution.”

Almost two years after the July 17, 2014, crash, the U.S. is still withholding its evidence, the Dutch concede. A Dutch source close to the investigation says the opposite is true: “Westerbeke is explaining that all secret U.S. data provided and given to the Dutch secret services can be used in court after it is legalised by the JIT and the Public Prosecutor.”

The multi-country investigation team headed by Westerbeke has examined “more than five billion web pages and more than half a million images, audio and video files..… With advanced search tools the relevant data are selected, whose origin is then followed up and its reliability tested. The same happens with information submitted by third parties such as international research collective Bellingcat.” Westerbeke reveals that the prosecutors have examined the claims, and rejected them. “Many sources which Bellingcat relies on were known to the JIT. In addition, the research team still has more and other information on this subject, which is not mentioned by Bellingcat. Insofar as Bellingcat has offered new sources, they are examined and assessed for suitability for the criminal investigation. No evidence of direct involvement of individual members of this [Russian military] unit at the shooting of the MH17 follows from the report of Bellingcat.”

Bellingcat is a UK-based group, headed by Eliot Higgins (pictured left). They have been publishing claims accusing the Russian military of direct involvement in the shoot-down. A Dutch-based group has published detailed analyses of Bellingcat and concluded its evidence has been fabricated and its claims false. In October, following a lengthy visit to the crash site in eastern Ukraine, one of the Dutch researchers, Max van der Werff (pictured), reported his research results.

Bellingcat can be read here. Higgins tweeted his accusation against a Russian military unit in January. The Dutch group reported its evidence on the faking of the BUK missile evidence a month later. Gabriele Wolff, a former German prosecutor, has reported her analysis of the evidence, coming to the same conclusion. Her reports can be read in German here.

Last week’s report to the Dutch victims was signed by Westerbeke as chief prosecutor for the Dutch government, “Coordinator of the Joint Investigation Team”, and “on behalf of the Joint Investigation Team – Australia, Belgium, Malaysia, Ukraine, Netherlands”. A total of 193 MH17 casualties were Dutch; 27 were Australian (plus 11 dual nationals or residents); 43 were Malaysian. There were 4 Belgian casualties; no Ukrainians.

Westerbeke’s counterparts for the Australian prosecution are pictured left.

According to the JIT agreement of 2014, the five member states are required to agree on public disclosure of information. Each of the member states has a veto power on what may be released.

In December, Andrew Donoghoe testified at the Victorian state coroner’s inquest on the Australian MH17 victims. He, too, refused to rule out an air-launched missile attack on MH17. He said he could not disclose to the state coroner the forensic evidence gathered by the JIT because the Ukrainian government had not consented. “Official communication of the conclusions of the results of the MH17 investigation”, Donoghoe said in court, “will only be released after agreement between the two JIT [Joint Investigation Team] countries.” For details, read this.

Asked this week if the Dutch prosecutor’s letter to the MH17 victims had been approved in advance by the Australian Federal Police and sent to the Australian victims’ families, the AFP refuses to say. The AFP spokesman in Sydney disengaged from the Dutch report, saying: “the head of the JIT are the Dutch authorities, so you are best placed putting your questions to them in the first instance.”

The spokesman added: “What is the purpose of asking questions about letters to NOK relating to MH17?” ‘NOK’ is not an acronym in Australian or Dutch use; it is the U.S. military term for “next of kin”.

Sources close to the investigation believe Australian officials are worried by mounting public and political concern in the Dutch parliament and media charging American and Ukrainian manipulation of the MH17 story. No comparable questioning has appeared in the Australian parliament or press.

The Australian government is so sensitive to the growing European doubts about the MH17 evidence that the AFP refused last week to declassify a report already presented in the Victorian state coroner’s inquest in December. A February 10 reply from the AFP to an Australian lawyer requesting public disclosure of evidence for the cause of death on board the MH17 said the document must remain secret because it is “a confidential document shared with JIT partners. It is part of the JIT file….Disclosure of the document…would or could reasonably be expected to cause damage to the Commonwealth’s [Australia] international relations with those countries represented on the JIT.”

The secret document, titled “Environmental Impact and Physiological Strain on Passengers and Crew of Flight MH17”, was written by Andrew Hunt, a scientist in the Australian Defense Department.

After reading a Dutch press copy of the letter which Westerbeke had not sent her, Denise Kenke, one of the MH17 “survivors” – Westerbeke’s term of address in last week’s letter – commented that there is a pervasive cover-up of the MH17 evidence. “I am not informed about any procedural step [by the European Court of Human Rights]. I do not know if defendant Ukraine has been given the chance to comment on my complaint, I even do not know if my complaint has been sent to Ukraine. I do not trust the Ukrainian Court system. This is why I have directly approached the ECHR. It seems to me that this choice is even worse. I am completely lost in darkness.”