By John Helmer, published on his website Dances With Bears, Sept 28, 2016 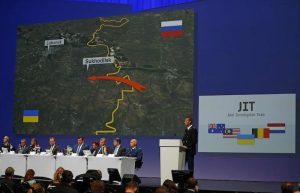 MOSCOW, September 28, 2016–At a press conference of the Joint Investigation Team (JIT) in the small Dutch city of Nieuwegein today, police, prosecutors and intelligence agents from The Netherlands, Australia, Belgium, Malaysia and Ukraine have revealed that they have found evidence from a freshly identified Ukrainian “mobile radar”, from secret Ukrainian air traffic controller tapes, and from secret U.S. satellite imagery on the destruction of Malaysia Airlines Flight MH17 over eastern Ukraine on July 17, 2014.

The conclusion reported by JIT is that a BUK missile caused the destruction of the aircraft; that it was brought into Ukraine from Russia and removed to Russia after launch; that it was fired from a patch of farmland near Snizhne, east of the approaching MH17; and that “one hundred persons can be linked” to the movement and operation of the BUK system. The JIT also announced that no identifications of these people have been made, and that at present there are no “official suspects”.

“We need a clear impression of the chain of command”, declared Fred Westerbeke, the principal Dutch member of the investigation and JIT spokesman. “We appeal for cooperative witnesses,” he said, adding “I can’t tell you how long this investigation will take.” According to the JIT presentation from Westerbeke and a Dutch police officer, Wilbert Paulissen, further investigation is expected to last until at least January 2018.

Lawyers and analysts observing the presentation have expressed doubt that the secret Ukrainian and American government evidence can be admissible in court. On questioning by a sceptical Dutch journalist, Westerbeke acknowledged that all the telephone intercepts and wiretaps reported as evidence of Russian involvement in the reported missile operation originated from the Ukrainian secret service. Evidence of the missile movement, ground launch, and smoke trail from social media, photographs and videotapes, and purported witnesses presented at today’s JIT session have all appeared publicly before; much of it already discredited as fakes.

A text of the JIT presentation can be read here. The live broadcast tape of the press conference is accessible here.

In an unusual disclosure, the JIT revealed it has confirmed only two pieces of warhead shrapnel from a BUK missile warhead in the MH17, one found in a body in the cockpit, and one in the cockpit frame. Until now, the Dutch Safety Board and the JIT have been claiming there were four pieces of shrapnel to substantiate the alleged BUK missile firing, three of them of a bow-tie or butterfly shape, and one of square shape. For more details, read this.

The JIT acknowledged today that it was aware of additional Russian radar and missile detonation evidence, but that it had not yet had time to receive it or investigate it. According to Paulissen, “the absence of evidence [of the Buk missile system in the Russian material] does not prove it was not there.”

Westerbeke added: “The quantity of the other evidence we have doesn’t lead us to another conclusion.” Westerbeke also claimed that the unreceived and uninvestigated evidence from Moscow proves the JIT’s case that there was no aircraft attack on the MH17. “Even the Russian Federation has concluded,” Westerbeke said, “that no aircraft could have shot down [MH17]”.

He was referring to the public briefing by the Russian Defence Ministry on September 26. The presentation then of what was described as new radar evidence turns out, Russian military sources now say, to have been of a civil radar source with insufficient technical capacity to match the Russian military radar evidence presented by the Ministry two years ago at a press briefing on July 21, 2014 [reporting the trackings of the Russian military radar station at Utyos-T station at Ust-Donetsk]. For the transcript and video of that presentation, click here. For a comparison of the Russian government briefing in 2014 and the U.S. government briefing which followed a day later, read this.

The apparent contradictions between the two Russian radar sources has been marked as a propaganda victory by Russian critics at NATO. The presentation of the civil radar evidence “was a rather bad variant,” a Russian military source says. “An example of inconsistency, even a mistake.”