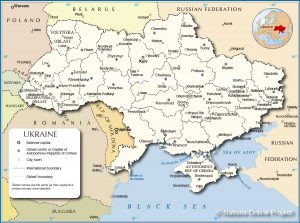 On February 12, 2015, following the disastrous defeat of its army and extreme-right paramilitaries in eastern Ukraine, the right-wing governing regime in Kyiv was obliged to sign a ceasefire and peace agreement with rebel forces in Donbass. The ‘Minsk-2’ ceasefire agreement provided for a comprehensive political and military solution to the civil war which the Kyiv regime had launched in April 2014. The Kyiv regime’s military defeat some ten months later took place in and around the small city of Debaltseve in the Donetsk oblast (province) of the Donbass region of eastern Ukraine. (See note below.) 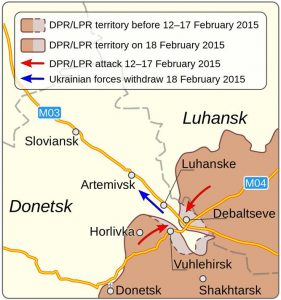 Battle of Debaltseve, eastern Ukraine in February 2015 (image from Wikipedia)

Minsk-2 provides for a compromise political settlement in which certain governmental powers over economic, social and cultural affairs would be devolved to the autonomous regions of Donetsk and Lugansk in eastern Ukraine.

Ukraine’s government is highly centralized by constitution. There is nothing equivalent to the powers which state and provincial governments exercise in the United States and Canada. Ukraine’s right-wing rulers fiercely resist any decentralization of powers, for a host of reasons. They have staked a great deal of their reputation in a civil war they launched more than three years ago against the people of the Donetsk and Lugansk regions. They are under extreme pressure not to concede anything to the rebel regions by the extreme-right in Ukraine and its Western-trained and armed paramilitary forces. And importantly, other regions of Ukraine such as Kharkiv and Odessa, as well as regions of Polish, Romanian and Hungarian speakers in western Ukraine, would undoubtedly ask for similar autonomy powers to anything granted to Donetsk and Lugansk.

As subsequent events have shown, Kyiv as well as its Western backers in the governments of the United States, European Union and Canada never intended to implement Minsk-2. But this cannot be admitted or acknowledged. Instead, the Ukrainian and Western governments as well as their mainstream media outlets have obscured and confused the meaning and content of the agreement. They have deflected attention from Kyiv’s failure to implement it, accusing Russia of bearing equal or greater responsibility for the failure to implement the agreement, including violations of its ceasefire terms.

The latest instalment of media obfuscation of Minsk-2 is to make it ‘disappear’. A front-page article in Canada’s Globe and Mail on November 9 performs such an act. The article by a seasoned writer of the newspaper Steven Chase is titled, ‘Pressure builds on Trudeau government to launch Ukraine peacekeeping mission‘. The article makes zero mention of Minsk-2. ‘Poof’, ‘disappeared’, ‘gone’.

The Toronto Star joined the disappearing act in a November 9 article by Ottawa bureau writer Tonda MaCharles. Writing of Foreign Minister Chrystia Freeland’s vain hope to have combat soldiers from Canada and its allies on the ground in eastern Ukraine (they are already there in a ‘training’ mission), she continued, “Canada’s commitment to regional security in Eastern Europe is further demonstrated by its leadership of a NATO battle group in Latvia…” According to this worn ideology (think invasion of Iraq in 2003, ‘war on terrorism’ following the September 2001 attack in New York City), ‘security’ comes from the barrel of a gun, not from promoting social and political rights.

Writers at the state-run Canadian Broadcasting Corporation have long played the game of dismissing the significance of Minsk-2 or making it disappear outright. A September 26, 2017 news report by CBC writer Murray Brewster, for example, dismisses the agreement in these words: “Those accords have remained unfulfilled because each side is making demands and establishing preconditions that are unacceptable to the other.”

An article by the same writer four days earlier makes no mention of Minsk-2. This is old hat; a July 2016 article by him reviewing Canada’s military intervention into Ukraine performs the same disappearing act.

The aforementioned Globe and Mail article voices the wish of the Ukrainian government that a United Nations-endorsed military intervention could be mounted which could ignore Minsk-2 and weaken and undermine the people’s republics of Donetsk and Lugansk. Those two republics came into existence in 2014 as part of the resistance of Ukrainians and Crimeans to the right-wing coup of February 2014 that overthrew the elected President Viktor Yanukovych.

But there is a hitch in the Ukrainian government’s wish: UN military interventions can only be conducted by the organization’s Security Council. Russia holds a veto there and it says any UN intervention must respect the terms of Minsk-2. Such a novel idea: that the Security Council should respect its own resolution endorsing Minsk-2!

Speaking of the coup of February 2014 in Ukraine and its extremely violent aftermath, these have long been the original ‘disappearing act’ in Ukraine as performed by Western media and governments.

Note:
A Western-biased account of the Battle of Debaltseve in January-February 2015 is here on Wikipedia.

Background:
Ukraine subverts draft Russian resolution to UN Security Council on UN mission to eastern Ukraine, statement by Russian Foreign Ministry Spokesperson Maria Zakharova in her weekly briefing on Sept 28, 2017, published on the website of the Ministry of Foreign Affairs of the Russian Federation

And at the same weblink: Russia’s initiative on protecting the Special Monitoring Mission of the OSCE in the south-east of Ukraine, by Dr Alexander Yakovenko, Russian Ambassador to the United Kingdom, Oct 2, 2017

For background and up to date news on the conflict in Ukraine as well as news and analysis of the new cold war, follow the website New Cold War: Ukraine and beyond. Roger Annis is an editor of the website.