Drama in the Kerch Strait: Teasing the Russian Bear 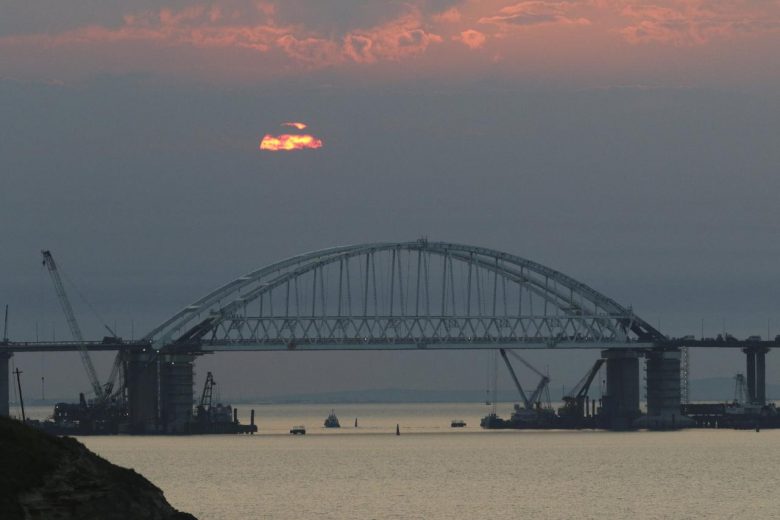 While the West calls it “Russian aggression,” Pepe Escobar sees what happened in the Kerch Strait as a ploy by a “desperate Ukrainian president and US conservatives” in an attempt to undermine the next meeting between Trump and Putin.

After all, Kiev was entering waters claimed by Russia with military vessels without clarifying their intent.

The intent, though, was clear; to raise the stakes in the militarization of the Sea of Azov.

The Kerch Strait connects the Sea of Azov with the Black Sea. To reach Mariupol, a key city in the Sea of Azov very close to the dangerous dividing line between Ukraine’s army and the pro-Russian militias in Donbass, the Ukrainian navy needs to go through the Kerch.

Yet since Russia retook control of Crimea via a 2014 referendum, the waters around Kerch are de facto Russian territorial waters.

Kiev announced this past summer it would build a naval base in the Sea of Azov by the end of 2018. That’s an absolute red line for Moscow. Kiev may have to trade access to Mariupol, which, incidentally, also trades closely with the People’s Republic of Donetsk. But forget about military access.

And most of all, forget about supplying a Ukrainian military fleet in the port of Berdyansk capable of sabotaging the immensely successful, Russian-built Crimean bridge. 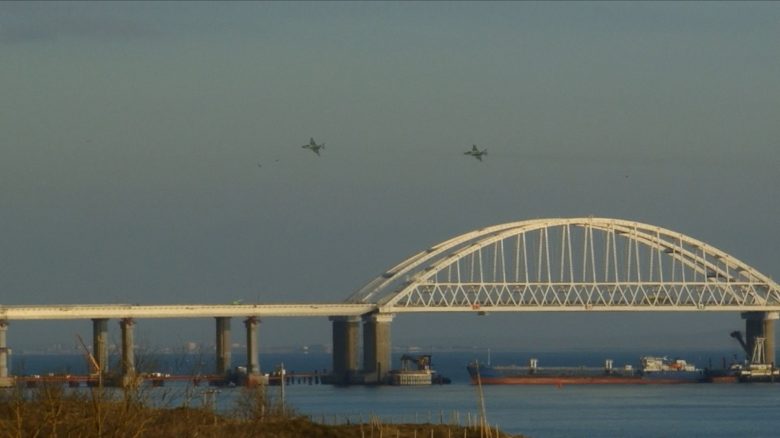 This video grab taken from footage of local media Kerch Info on November 25, 2018 shows Russian aircraft flying over the Crimean Bridge that spans the Kerch Strait, a narrow strip that links the Azov and Black seas, as a Russian ship blocks the strait, after Russia fired on and then seized three Ukrainian ships on November 25, accusing them of illegally entering its waters in the Sea of Azov. – Kiev and Moscow were facing their worst crisis in years on November 26 as Ukraine and its Western allies demanded the release of three ships fired on and seized by Russia near Crimea. Ukraine’s military was on high alert and parliament was meeting to vote on a request to impose martial law from President Poroshenko who accused Moscow of a “new phase of aggression.” (Photo by – / KERCH INFO / AFP) /

Predictably, Western media has been complaining again about “Russian aggression”, a gift that keeps on giving. Or blaming Russia for its over-reaction, overlooking the fact that Ukraine’s incursion was with military vessels, not fishing boats. Russian resolve was quite visible, as powerful Ka-52 “Alligator” assault helicopters were promptly on the scene.

Washington and Brussels uncritically bought Kiev’s “Russian aggression” hysteria, as well as the UN Security Council, which, instead of focusing on the facts in the Kerch Strait incident, preferring to accuse Moscow once again of annexing Crimea in 2014.

The key point, overlooked by the UNSC, is that the Kerch incident configures Kiev’s flagrant violation of articles 7, 19 and 21 of the UN Convention on the Law of the Sea.

I happened to be right in the middle of deep research in Istanbul over the geopolitics of the Black Sea when the Kerch incident happened.

For the moment, it’s crucial to stress what top Russian analysts have been pointing out in detail. My interlocutors in Istanbul may disagree, but for all practical purposes, the Kerch Strait, the Sea of Azov and the Black Sea, in military terms, are de facto Russian lakes.

At best, the Black Sea as a whole might evolve into a Russia-Turkey condominium, assuming President Erdogan plays his cards right.  Everyone else is as relevant, militarily, as a bunch of sardines.

Russia is able to handle anything – naval or aerial – intruding in the Kerch Strait, the Sea of Azov and the Black Sea in a matter ranging from seconds to just a few minutes. Every vessel moving in every corner of the Black Sea is tracked 24/7. Moscow knows it. Kiev knows it. NATO knows it. And crucially, the Pentagon knows it.

Still, Kiev – “encouraged” by Washington – insists on militarizing the Sea of Azov. Misinformed American hawks emerging from the US Army War College even advocate that NATO should enter the Sea of Azov – a provocative act as far as Moscow is concerned. The Atlantic Council, which is essentially a mouthpiece of the powerful US weapons industry, is also pro-militarization.

Any attempt to alter the current, already wobbly status quo could lead Moscow to install a naval blockade in a flash and see the annexation of Mariupol to the People’s Republic of Donetsk, to which it is industrially linked anyway.

This would be regarded by the Kremlin as a move of last resort. Moscow certainly does not want it. Yet it’s wise not to provoke the Bear.

Rostislav Ischchenko, arguably the sharpest observer of Russia-Ukraine relations, in a piece written before the Kerch incident, said: “Ukraine itself recognized the right of Russia to introduce restrictions on the passage of ships and vessels through the Kerch Strait, having obeyed these rules in the summer.”

Yet, after the US Deep State’s massive investment even before the protests on the Maidan in Kiev in 2014 that wrested Ukraine away from Russian influence a possible entente cordiale between the Trump administration and the Kremlin, with Russia in control of Crimea and a pro-Russian Donbass, could only be seen as a red line for the Americans.

Thus a Kerch Strait incident designed as a cheap provocation, bearing all the hallmarks of a US think-tank ploy, is automatically interpreted as “Russian aggression”, regardless of the facts. Indeed, any such tactics are good when it comes to derailing the Trump-Putin meeting at the G20 in Buenos Aires this coming weekend.

Meanwhile, in Ukraine, chaos is the norm. President Petro Poroshenko is bleeding. The hryvnia is a hopeless currency. Kiev’s borrowing costs are at their highest level since a bond sale in 2018. This failed state has been under IMF “reform” since 2015 – with no end in sight.

Poroshenko’s approval rate barely touches 8%. His chances of being re-elected, assuming polls are credible, are virtually zero. Little wonder he used the Kerch to declare martial law, effective this Wednesday, lasting for 30 days and bound to be extended. Poroshenko will be able to control the media and increase his chances of rigging the election.

But the US would lose no sleep if they had to throw Poroshenko under the (Soviet) bus. Ukrainians will not die for his survival. One of the captains at the Kerch incident surrendered his boat voluntarily to the Russians. When Russian Su-25s and Ka-52s started to patrol the skies over the Kerch Strait, Ukrainian reinforcements instantly fled.

Poroshenko, wallowing in despair, may still ratchet up provocations. But the best he can aim at is NATO attempting to modernize the collapsing Ukrainian navy – an endeavor that would last years, with no guarantee of success.

For the moment, forget all the rhetoric, and any suggestion of a NATO incursion into the Black Sea. Call it the calm before the inevitable future storm.