Ukraine has decided to break the ceasefire memorandum unilaterally says the head of the Donetsk People’s Republic, Aleksandr Zakharchenko, speaking to journalists about the resumption of heavy shelling by Ukrainian forces of the territory of the Republic. [The full translated interview is below.] 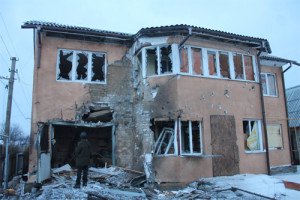 House shelled in Donetsk on Jan 11, 2015, photo by Patrick Lancaster

“We are ready for all kinds of talks,” said Zakharchenko. But if we can’t agree upon peaceful settlement of the conflict, we will have to use force. The Army of the DPR is capable of adequate reaction to any aggression” he stated. Zakharchenko claimed that 41 firing points of the enemy were identified and 20 of them exterminated. The losses on the Ukrainian side are 200 men in dead and wounded.

“We are true to our word. We only responded to fire from the positions from which the enemy shelled us. We destroyed the artillery and mortar-gun batteries which had been shelling Donetsk.”

Zakharchenko said the massive shelling of the Republic’s territory is explained by the replacement of the commander of the so-called Anti-Terrorist Operation [of the Kyiv government and armed forces]. He also remarked that not only are “voluntary battalions” refusing to obey the orders of the president of Ukraine, Petro Poroshenko, but so, too, are the armed forces.

Aleksandr Vladimirovich, will you tell us what is going on in Donetsk?

Well, life in Donetsk is returning to the state it was before the preliminary ceasefire negotiations. In the course of three days, Ukrainian authorities – and yesterday it was especially obvious – have been shelling the city of Donetsk. The shelling bears a chaotic character: it is mainly targeting residential areas, apart from one enterprise, which is being deliberately demolished. That is the Zasyadko [coal] mine. This mine is subjected to aimed fire – the information in regard to this had been confirmed already. The enemy is trying to destroy the heapstead and the substation. Yesterday some six hundred people were stuck underground and had to walk to the surface.

Water supply had been restored with great difficulties, and I cannot say right now if it is fully restored. Judging by these facts, as far as I understand, Ukraine has decided to unilaterally breach the ceasefire memorandum, although there was no official declaration of breaking the agreement.

Are you holding any consultations concerning the forthcoming negotiations?

I will be earnest with you: I am wary of all these consultations, as they bring zero results. They are the people, who are not true to their own words. We are ready – and I repeat: we are ready to all kinds of talks. As I have already said, human lives are worth serious efforts. If we are able to save lives by peace talks, we will hold peace talks. It is a sin not to do it. However, we also realize that if this conflict cannot be settled in a peaceful way, we will have to use force to put an end to it.

The Army of the Donetsk People’s Republic is capable of adequate response to any aggression, and yesterday 41 firing points of the enemy had been taped, more than 20 of them were exterminated. According to preliminary reports the enemy’s casualties are about 200 men in dead and wounded, including the losses of manpower in the airport’s terminal. I do not see any sense in allowing any rotation and evacuation of the wounded at the moment. This boil on the body of Donetsk and the DPR must be purged. This is the official position of the Donetsk People’s Republic. As far as the all rest of it is concerned – well, we’ll see the reaction of Ukrainians and then act.

Are the militias carrying out only response actions, or are they advancing?

Well, I will be frank: we kept our word and we did nothing more than respond to the fire from the enemy’s positions, that is, we destroyed those artillery batteries that had been firing on Donetsk. Nevertheless they are shelling the city again today, and you can hear the blasts. They are shelling Gorlovka and Dokuchayevsk, they are shelling Yelenovka. Thus, Ukraine does not shell Donetsk so massively today, but it is heavily shelling other settlements.

I can tell you why they are doing this: the former ATO commanders were replaced by the people with more radical views, and now they say that they cannot see any peaceful civilians here, they can only see targets. This can only mean one thing: that Ukrainian authorities and President Poroshenko himself are not able to control the situation in Donbass. Not only territorial battalions, which he never controlled, ceased to obey his orders, but the armed forces as well. Many factors testify to the weakness of Ukrainian authorities. I can envisage further developments in Kiev. They are going to be sad for President Poroshenko.

Aleksandr Vladimirovich, your meeting with the representatives of coal-mining enterprises took place today. Will the transport blockade of the region hinder their work?

You know, there is a saying: “The gates of every fortress will open in front of a cart filled with gold”. Even cities like Mariupol will surrender for the sake of railway cars filled with coal. Ukraine will be ready to pay much for our coal. It will pay with its honour, its dignity, and its pride.

It is bad for Ukraine that its population is freezing, and that is why Ukraine buys our coal by hook or by crook, in spite of the fact that it is waging a war against us. Fifty per cent of Ukrainian coal is mined in our territory. About 20 per cent of power is produced here. Dear Ukrainians, we are capable of providing ourselves with coal and electricity, and our children will not get cold! They go to school, and do not sit in basements, even now, because we are proud, free and brave people. We are defending our freedom with arms in our hands.

If you cannot tackle your authorities, it is your own problem. You stood in Maidan and cried that you wanted to live in a free country. What kind of country are you living in now? Whom did you bring to power, what kind of pig did you let in it? Not even a single one! Previously, we had only one pig-like leader. Now there are a dozen pigs in power! You brought in foreigners. It is getting ridiculous. The wife of one of the former presidents was a CIA agent, and now your ministers are foreigners. What freedom are you talking about? What are you doing? Where are Ukrainians? Where are Taras Shevchenko and Lesya Ukrainka? [poets of Malorossiya, today known as Ukraine].

Whose children are you, don’t you remember? Leave our land, go back to Kiev and topple these dogs of authorities of yours! Sorry, thank you very much.

The news agency Novorosinform reports on January 13 the claim of Denis Pushilin that in the prevoius 24 hours, the Armed Forces of Ukraine fired on Donetsk 63 times. Pushilin is the representative of the People’s Republic of Donetsk for the ceasefire agreement reached in Minsk ,Belarus on Sept. 5.

“If you take the dry figures, over the past 24 hours we have recorded 63 firings. There are eight casualties; two of them are deaths and six are casualties. Among the wounded is a pregnant woman. This is just from last night,” said Pushilin.
(Translation by Greg Butterfield.)

Watch a video of the aftemath of recent shelling of the Kievskiy district of Donetsk city, from Novorossiya Today: 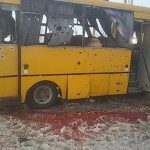