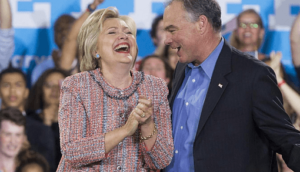 By picking Tim Kaine as her vice-presidential running mate, Hillary Clinton has revealed her true preferences and shown that her move to the left on policy issues during the primaries was simply a tactical move to defeat Bernie Sanders. It’s not what you say, it’s what you do.

Clinton can talk about caring about the U.S. public, but this choice cuts through the rhetoric. The two politicians to whom she gave serious consideration to choosing as her running mates were Kaine and Secretary of Agriculture Tom Vilsack. What both men share in common is, like the Clintons, being leaders of the Democratic Leadership Council (DLC). The DLC was, on economic and foreign policy issues, a servile creature of Wall Street – funded by Wall Street.

As Tom Frank’s new book Listen, Liberal documents, the DLC vilified the New Deal, financial and safety regulation, organized labor, the working class, opponents of militarism, opponents of the disastrous trade deals that were actually backdoor assaults on effective health, safety, and financial regulation, and the progressive base of the Democratic Party. The DLC leadership, which included President Clinton and Vice President Gore, entered into a series of cynical bipartisan deals with the worst elements of the Republican Party, Alan Greenspan, and Wall Street elites that:

Kaine — like Hillary Clinton – has embraced for decades the DLC/’New Democrats’ agenda — meaning they are allies of Wall Street. They embrace a neo-liberal, pro corporate outlook that has done incredible damage to the vast majority of Americans.  Kaine is actively pushing to weaken already grossly inadequate financial regulation and pushing to adopt the indefensible ‘Trans-Pacific Partnership’ (TPP). By choosing Kaine, Hillary Clinton is signaling that her new-found support for financial regulation and opposition to TPP is a tactical ploy to win the nomination before she ‘pivots’ back to the disastrous policies that she, Kaine, and Vilsack have helped inflict on the world for decades. She is playing into Trump’s claims that she is not honest.

What’s especially noteworthy is that Hillary Clinton and Kaine are carrying Wall Street’s water while the Republican party is repudiating some of these policies. The Republican Party platform (cynically) calls for reinstating Glass Steagall and Donald Trump has called for the defeat of TPP in an equally cynical fashion. The self-described liberals – the Clintons, Kaine, and Paul Krugman are against reinstating Glass-Steagall.

This shows Hillary Clinton hasn’t learned a thing from the failed pro-Wall Street policies that have wrecked the economy. It’s bad politics and it’s bad policy. Actually, that’s not quite right. These policies have worked brilliantly for the top 1/1000th of one per cent. They have been disastrous for nearly everyone else in the U.S. — and around the world.  As Senator Warren says, “the financial system is rigged.”

As an attorney, professor of economics, serial whistleblower, former financial regulator and white-collar criminologist, I can explain exactly how the DLC and their Republican allies, both of which were traditionally funded by and servants of Wall Street, rigged the system. You can be sure that people like me who have demonstrated their ability and willingness to destroy the rigged system in order to regulate and prosecute financial elites and their political cronies will never be appointed by a Clinton/Kaine administration.

And that’s just the finance. On the economics, the choice of Kaine signals that Hillary Clinton is openly returning to her life-long embrace of the economic malpractice of austerity. Recall that Bill Clinton tried in league with Newt Gingrich to largely privatize Social Security. That is Wall Street’s greatest dream. The only reason it didn’t happen is that the Republican rebels asked for too much and that scuttled the deal that Bill Clinton was making with the Republican congress. The same thing happened when the Tea Party sank President Obama’s efforts to reach a “Grand Bargain” with the Republicans to adopt austerity and make cuts to the safety net.

The leadership of the now defunct DLC continue to applaud the cuts they made to Social Security and the oxymoron they called ‘welfare reform’ that has brought so much misery to poor mothers. The preposterous lie that, working with President Reagan, they “saved Social Security” is repeated daily on the intro to an MSNBC program.

Even though it would be good politics as well as policy for Hillary Clinton to break with the Wall Street wing of the Democratic Party and choose a VP from the democratic wing of the Party, she refuses to even pretend that she gave serious consideration to choosing a progressive as her running point. Democrats should take a lesson from economics and focus on this clear case of ‘revealed preferences’. She is telling us that she intends to ensure that should she be elected and unable to complete her term of office, she can be confident that her successor will continue the DLC’s disastrous agenda.

William K. Black is an associate professor of economics and law at the University of Missouri-Kansas City. A former bank regulator who led investigations of the savings and loan crisis of the 1980s, he is the author of the book ‘The Best Way to Rob a Bank is to Own One’. 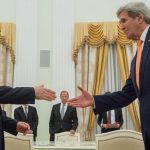