DONETSK – The Donetsk People’s Republic is concerned by the lack of reaction from the international community on Ukraine’s protracting of Minsk-2 peace negotiations and implementation of the 13-point package of measures agreed to in February 2015, says acting DPR Foreign Minister Natalia Nikonorova. [Text of Minsk-2 ceasefire and peace accord here.] 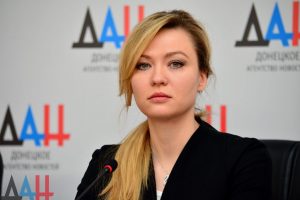 “Because of the Ukraine’s actions, two years into the conflict and we are still far away from the implementation of the documents signed in Minsk. We are sincerely concerned by the lack of reaction of the international community on such actions on Ukraine’s side.”

Due to this fact, the Donetsk rekpoublic is urging the international community to pay attention to the situation in the negotiations of the Minsk-e2 political subgroup and to take all measures to pressure Kyiv into the quickest and fullest implementation of the [13-point] Package of Measures.

Donetsk and Lugansk republic representatives stated after recent Minsk-2 talks that Ukraine deliberately protracted the political subgroup’s work by refusing to discuss the ‘Steinmeier’ formula for implementation. They also urged a clear negotiating procedure in view of Ukraine’s inconsistency.

The formula suggested by former German Foreign Minister Frank-Walter Steinmeier [in late 2015 and 2016] outlined principles of implementation of the 2015 Ukrainian law ‘On local self-government order in certain areas of the Donetsk and Lugansk region’. According to his plan, the law should be enforced on the day of local elections on a temporary basis, and permanently upon OSCE publishing its report on the elections outcome.