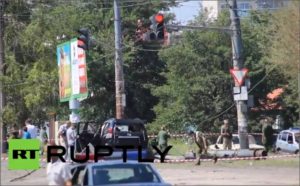 Scene of the bomb attack against Igor Plotnitsky in Lugansk on August 6, 2016

The head of the Lugansk People’s Republic, Igor Plotnitsky, has been injured after an explosion rocked his car on the morning of August 6. It is reported he is undergoing surgery due to the injuries he receved.

The incident took place in the city of Lugansk, the capital of LPR, the headquarters of the LPR People’s Militia told RIA Novosti. Two other people were injured.

It is not clear at present whether the blast occurred inside the car or near the vehicle.

“Plotnitsky is in a grave condition and is undergoing an operation,” a source told Interfax. 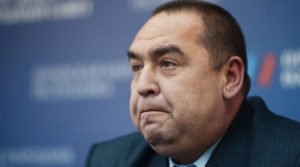 The explosion also reportedly damaged the facades of nearby buildings and shattered surrounding windows. Police have cordoned off the area where the explosion took place.

“Today at 07:50 there was an assassination attempt on the head of the LPR. Facts at the scene point to a terrorist attack,” the LPR Chairman of the Council of Ministers Sergey Kozlov said, as cited by the Lugansk Informational Center. He added that the Lugansk authorities have already set up a working group to investigate the incident.

“Currently the condition of Igor Plotnitsky is stable, there is no threat to his life,” Kozlov added.

Plotnitsky received shrapnel wounds, which caused damage to his liver and his spleen, a hospital source told Interfax.

An advisor to the head of the Security Service of Ukraine Yury Tandit told the 112 Ukraine channel that Plotnitsky was deliberately targeted, adding that the LPR leader was in serious condition. “My sources report that an assassination attempt has been carried out,” he said.

A source in LPR General Prosecutor’s Office told Interfax that saboteurs could be behind the attack.

Viktor Poplavsky, an expert from Russia’s Defence Ministry, told the Life.ru news portal that he believed more than a kilo of explosives were used to create the bomb. “If the bomb was planted in the car or under the car, there would have been practically no chance of survival,” he said, adding that the explosive device might have been placed somewhere near Plotnitsky’s car.

Plotnitsky became the head of LPR in August 2014, months after the authorities in Kyiv launched a major military assault against rebels in Donbass, eastern Ukraine.

In February 2015, Plotnitsky signed the Minsk-2 agreements regarding the peaceful settlement of the conflict between Kiev and the rebels in eastern Ukraine. The agreement was co-signed with the head of the Donetsk People’s Republic, Aleksandr Zakharchenko.

The people of the Lugansk and Donetsk regions (Donbass) in eastern Ukrainian rejected the legitimacy of a February 2014 coup in Ukraine that aimed to rupture Ukraine’s historic ties to Russia and establish an economic association with austerity Europe. They established their republics and elected their own leaders after the armed forces and extremist paramilitaries of the new regime in Kyiv regime launched a military operation in April 2014 to subdue them.

Kyiv’s so-called Anti-Terrorist Operation has caused the deaths of some 10,000 people, injured thousands more and displaced more than one million people from Donbass.

Attempted assassination of Igor Plotnitsky, leader of the breakaway Lugansk People’s Republic, provokes fears of infighting and of a possible Ukrainian summer offensive.

News of the assassination attempt on Igor Plotnitsky, the head of the breakaway Lugansk People’s Republic, will come as no surprise to close observers of the Ukrainian conflict.

Whilst there is a strong possibility that the assassination attempt was the work of the Ukrainian secret service the SBU, it is by no means impossible that it is the result of factional infighting within the Lugansk People’s Republic.

Whereas the political situation in the neighbouring Donetsk People’s Republic has stabilised with its leader Alexander Zakharchenko apparently both effective and popular, the same has not been true of the Lugansk People’s Republic where Igor Plotnitsky is a controversial figure and where there has been a string of unsolved murders going back to the early part of last year.

The most notorious of these murders was the one in May last year when the popular militia leader Alexey Mozgovoy was killed in a roadside ambush.  Mozgovoy was a known critic of Plotnitsky’s and was opposed to the Minsk II peace process, which Plotnitsky, Zakharchenko and Russia have all backed.  Inevitably Plotnitsky was accused by some of Mozgovoy’s murder, though evidence for that is slight.  Others blame the Ukrainian SBU.  The Ukrainians, for their part, predictably blame Mozgovoy’s murder on Russia’s military intelligence agency the GRU.

The continued instability in the Lugansk People’s Republic must be causing the Russian authorities serious concern.  Whatever their long term aims for Ukraine, the Russians need the two people’s republics to be politically stable if the Minsk II process to which they are committed is to have any chance of success. Almost certainly, in the aftermath of the assassination attempt there will be concerned discussions underway in Moscow about what can be done to stabilise the situation in the Lugansk People’s Republic. It is not impossible that the Russian authorities will take a hand in the investigation of the assassination attempt.

Compounding these worries will be fears in Lugansk and Moscow about a possible Ukrainian offensive this summer. So far, though fighting and shelling along the contact line has been going on continuously for weeks, no actual offensive has taken place. That may be a sign that Russian warnings are being heeded. However, it is unfortunately fully possible that the attempted assassination of Plotnitsky is part of a Ukrainian attempt to destabilise the Lugansk People’s Republic before such an offensive is launched.

A particular reason to worry this might indeed be the Ukrainian plan is the start of the Olympic Games in Rio. If there is a Ukrainian plan to launch an offensive as world attention is focused on the Olympic Games in Rio, then it would not be the first time that Russia’s regional enemies have used the Olympic Games to give themselves cover for an action they are taking. In 2008 Georgia timed its ill-starred invasion of South Ossetia to take place during the Beijing Olympics, whilst the Maidan coup in February 2014 happened during the winter Olympics in Sochi.

If that is the Ukrainian calculation, then it is certainly wrong. It is very doubtful that the death or wounding of such a controversial figure as Plotnitsky would seriously impact on the East Ukrainian militia’s effectiveness. As for Russia, Putin has made it clear that Russia will not allow the Donetsk and Lugansk People’s Republics to be overrun by the Ukrainian army, and any idea Russia would be put off from acting decisively because the Olympics Games in Rio are underway is fanciful. [End article.]

Note by New Cold War.org: The New York Times reports on the assassination attempt against Igor Plotnitsky in an article in its Sunday, August 7 edition. The article contains much speculation, but of note is how the New York Times describes, or, truth be told, whitewashes, the escalating shelling attacks and military buildup by Ukrainian armed forces against the Lugansk and Donetsk republics in recent months. The Times writes, “July was the deadliest month for the Ukrainian Army in a year, with 27 soldiers killed in fighting. Overnight Friday to Saturday, the Ukrainian military reported 50 artillery strikes in three locations from Mariupol in the south on the Azov Sea to the Luhansk region in the north.” 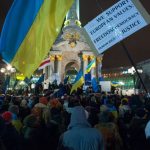 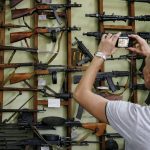