“Donbass Borderland” by the Director Renat Davletyarov, was premiered at Chapter Arts Cardiff as part of the April 2019 John Hughes Arts Festival earlier this month. The Welsh premiere organisers wanted to appeal to Britain’s own sense of history, in that John Hughes, a Welsh industrialist, founded the city of Hughesovka that later became Donetsk in Russia’s Novorossiya, thanks to a lucrative iron production contract with the Imperial Russian Government.

A few months after the e-premiere of Russian Hour’s New York to Donetsk & Back documentary on Off-Guardian, there’s a feature film about the new “unknown war” in Donbass.

A film, which in 2019 may seem perhaps too amenable to the idea that this is a Ukrainian internal civil war (rather than the West’s proxy war against Russia), in which Donbass has shown its Russian “DNA”. Yet even such a benevolent view of the conflict, where the other side (i.e. those who are with Kiev) are not dehumanised but are analysed, is still not acceptable to Western MSM, the UK or, God forbid, Ukraine itself.

The Welsh premiere organisers wanted to appeal to Britain’s own sense of history, which reminds us that John Hughes, a Welsh industrialist, founded the city of Hughesovka that later became Donetsk in Russia’s Novorossiya, thanks to a lucrative iron production contract with the Imperial Russian Government.

Does this historical argument count in today’s postmodernist (or rather post-mortem) West whose history has “ended”? Will the film’s nuanced approach be deciphered or will it be dismissed as Russian “propaganda” just because it’s Russian and the main character, a Donetsk People’s Corps’ volunteer, Anatoly, is way too charismatic and human.

One cannot but help recognise in him the character of the late Head of the DPR, Alexander Zakharchenko, killed by US-trained agents in Donetsk. Even the fact that a Ukrainian soldier, Andrey, is portrayed as a human too won’t matter to the film’s critics, this nuanced approach gets lost in the black & white monoculture of today’s UK and the West.

“Donbass Borderland” by the Director Renat Davletyarov, was premiered at Chapter Arts Cardiff as part of the April 2019 John Hughes Arts Festival, that commemorated his great industrial and philanthropic legacy, this year being the 205th Anniversary of his birth.

Russian and Welsh musicians including Artem Ananiev and members of Symphonic Brass Wales were also featured during the Festival.

Both audience and Festival participants were greatly moved by the film, comments from the audience included:

It was harrowing, an interesting story of a people split (by war), it was great that there were all those different viewpoints”

A profoundly moving film, I thought the strongest message was the anti-war point … civil war is always the worst kind of war …. maybe that film should be shown to every politician in the West”

This is ongoing (war), it’s recent, the people are still struggling”

The organisers hope that the film will be shown again in the West.

Were there any reports about the film or the Hughes Festival in Western MSM? None, in fact there was total silence.

Nevertheless, such cinema premieres – however “small” – are still important as you need torchlight to see the vastness of a cave with the void that represents our media landscape these days. Those few who saw the film may start thinking differently, perhaps another Welshman, a new John Hughes, will realise, like his great predecessor, that it pays to do business with Russians (and not just financially speaking). And the likes of him will dismiss the ramblings of the UK and Ukraine as mere white noise.

The film is beautifully shot, it has a “Bertolucci” quality to its cinematography: in the finale a van with both Ukrainians and Donbass people rush toward the Russian border, vast beautiful fields burnt with the sun in the background.

Ultimately, this border (between Donbass and Russia) itself is a geopolitical nonsense, like a border between, say, Wales and England would be.

A sheer nonsense like the sign “the ruler of Ukraine” recently inscribed on the statue of St.Vladimir, erected in London by Ukrainian nationalists, who failed to acknowledge that the country he ruled was called Rus. 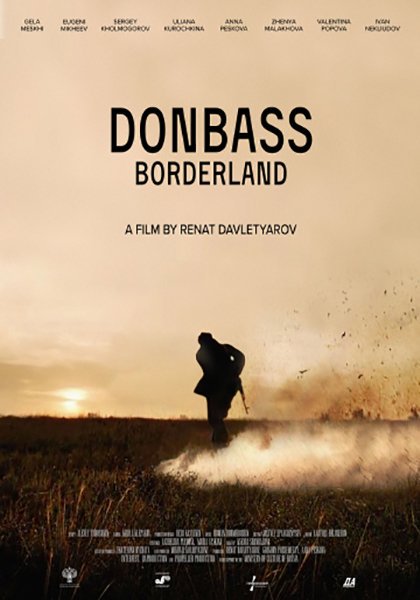