Germany would rather see Minsk 2.0 fall than have to critique Kiev

Those who follow the military news from Ukraine closely will know that there has been an outbreak of fighting over the last few days in the area around Donetsk airport. 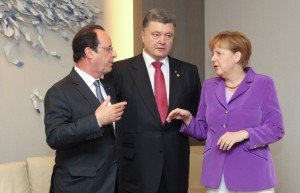 As usual, both sides have blamed each other; however reports by Colonel Cassad and Gleb Bazov [Slavyangrad.org] – both acknowledged supporters of Novorossiya, but both consistently reliable reporters of the conflict – make clear the fighting began as a result of a Ukrainian attack.

Both Colonel Cassad and Gleb Bazov report that the militia was initially taken by surprise and lost ground in the town of Peski.  However, as of the time of writing, the very latest reports from Gleb Bazov say (based on information from sources he “considers reliable”) that the ground lost by the militia has been recovered, and that both sides are now back at their start lines.

If so, then this would suggest that the latest fighting was more a probing attack by the Ukrainians, testing the militia’s defenses and trying to make some tactical gains, rather than the start of a general offensive for which Kiev still looks unprepared.

This, however, begs the question of why the fighting has resumed now?

The short answer is that the attack was intended as a show of force in advance of the meeting on 13th April 2015 in Berlin of the foreign ministers of the Normandy Four (Russia, Germany, France, and Ukraine).  The Ukrainian leaders were presumably hoping that a military victory – however minor – would show that, despite its recent defeats and its economic crisis, Ukraine is still a force to be reckoned with and that this would strengthen the hand of their negotiators at the meeting in Berlin.

Colonel Cassad, Gleb Bazov, and others have speculated – probably rightly – that the Ukrainians were also hoping to use the resumption of fighting to push their idea for a peacekeeping force whilst giving themselves excuses for their failure to implement the political sections of the Minsk Memorandum. As to that, the Berlin meeting appears to have ruled out the idea of a peacekeeping force, so if this was the Ukrainian gambit, then it appears to have failed.

However, that is not the most important lesson to take from this episode. Ukrainian motives for restarting the fighting are irrelevant.  What matters is that they restarted it.

The resumption of the fighting shows again that the present government in Kiev is not seeking peace. It has refused to implement the political section of the Minsk Memorandum. As the recent fighting shows, it is not committed to the ceasefire either. At the first chance, it goes back on the attack.

The nature of the Ukrainian government makes it incapable of seeking peace.  This point has now been made by many commentators, including by some whose articles have appeared on Russia Insider.  It has been made by highly regarded scholars like Dmitry Trenin and Paul Robinson. It has also been made (repeatedly) by me (see for example Ukraine Goes to War – And Always Will As Long As Maidan Holds Power).

Any idea that a Ukrainian government that employs someone like Dmitro Yarosh, the head of Right Sector, as an adviser in the Defense Ministry, can possibly be interested in peace, is frankly delusional. However, it is a delusion that the one government that has it in its power to decide whether there will be peace or war continues to cling to.

That government is the government of Germany.  Germany is the only country that has both the means to force Kiev to compromise and potentially the self-interest to make it want to do so.

However, based on the recent conduct of Germany’s foreign minister, Frank-Walter Steinmeier, its government is nowhere close to finding the courage to do so, even though the part it played in the negotiations that led to the Minsk Memorandum shows that at some level it understands the need to do so.

In a situation where Kiev has clearly violated the ceasefire, all Steinmeier could bring himself to say in an interview with Die Welt was “we expect both Moscow and Kyiv to seize the central issue of the implementation of the next phase of Minsk.”  Bizarrely, as the shells rained down on Donetsk, he lauded the “progress” to date, citing the “well-advanced withdrawal of heavy weapons.”

With the fighting intensifying and the ceasefire in tatters, all Steinmeier could say at the Berlin meeting itself was that there is “no alternative” to the Minsk ceasefire agreement and that “nothing is easy in the Ukraine crisis, this is not new. During these talks today the differences of opinion between Kiev and Moscow also became clear once again.”

These weak and banal comments, splitting the difference between Moscow and Kiev for violating a ceasefire that Kiev is plainly in breach of, in a conflict in which Moscow is not even directly involved, must leave the Russians baffled – or would, if they were not by now wearily used to them. Certainly these comments are not the straightforward condemnation of Kiev’s conduct that the situation on the ground and the cause of the negotiated peace as envisaged by the Minsk Memorandum urgently calls for.

So long as the German government persists in this pusillanimous behavior – whatever the reason for it – the conflict will continue, until one side or the other achieves final victory on the battlefield. Since there seems little chance of the present German government ever finding the will or the courage to take a firm stand, victory on the battlefield by one or side or the other looks like the way this conflict will end.

Bernd, whoever he is, has made a truly excellent comment on the thread of the piece I have up today on Russia Insider (see below on this Page).

“Welcome in the real world of Germany, Mr. Alexander Mercouris. I know that the world thinks the world about Madam Merkel, her strength, her smartness, her decisiveness, her intelligence. This, however, is the true only in the world of fiction and perception. In the real world Madam Merkel is a very weak, rather dull, rather unimagiantive and indecisive leader coming from an opportunistic background with only one goal in mind: me! Me, being Madam Merkel. Nothing else counts.

The moment I heard that she was “brokering peace” in Ukraine I started commenting that this was for show only, because it advanced her position vis a’ vis the German electorate and thus helped her popularity. This was never about peace or the people (lives) saved in Ukraine, it was never about being in opposition to the USA, it was all about Madam Merkel as it has always been in anything she has done in her life. The true life of Madam Merkel (her life in East Germany) is the one that shows the true colours the woman is made of. It is therefore carefully concealed from public knowledge and has been spun around by spin masters to such a degree that she herself cannot recognize it any more.

I know it almost sound blasphemous in light of her public acclamation by eveyone. The women is the next German disaster Germany has unleashed on Europe and the world and I am deeply embarassed that a person like her goes around and pretends to represent me. Not in my name!”

Bernd is unaware that his take on Merkel (“very weak, rather dull, rather unimaginative and indecisive leader coming from an opportunistic background with only one goal in mind: me!”) is exactly the same as my own. I too like him think she is totally out of her depth and a disaster for Germany waiting to happen (for the Ukraine she has been a disaster already).

As the title of my piece makes obvious, it is in part addressed to people in Germany where there seems to be quite a lot of interest in Russia Insider – possibly because the German media is apparently even more outrageously biased and monolithic than the Anglo-American causing even more people to look for an alternative.

On the subject of its threads, Russia Insider in my opinion does an excellent job policing them. The result is that in place of trolls and fruitcakes (who sadly populate the threads on so many Russia related websites) we have some excellent commentators like Boris Jaruzelski and Bernd. The result is that the threads are sometimes as interesting to read and as informative as the articles they comment about. 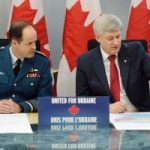 Canada to send military troops to Ukraine as trainersDigest, Ukraine 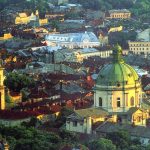