Donald Trump’s final act: Snuffing out the promise of democracy in the Middle East 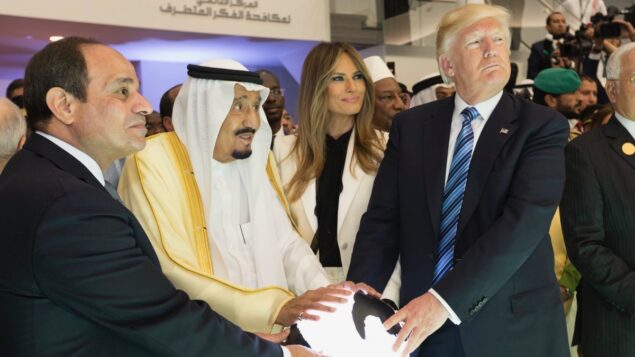 In the context of the 10-year anniversary of the “Arab Spring,” Vijay Prashad discusses Donald Trump’s efforts to crush the aspirations of the people in the Middle East.

Ten years ago, a hawker in Tunisia set himself on fire, which spurred on people along the entire Mediterranean Sea—from Morocco to Spain—to rise up in revolt. They took to their squares indignant at the terrible conditions in which they had to make their lives.

Little of their agenda has been advanced in the past decade. Governments of the southern European states have one by one betrayed the aspirations of the people; the most dramatic such failure was of the Syriza government in Greece, which won a mandate against austerity and then surrendered before the troika (the European Central Bank, the European Commission, and the International Monetary Fund) in 2015.

Uprisings in northern Africa ended with the return of the generals (as in Egypt), the destruction of states (as in Libya), and the assertion of the Arab monarchies (from Morocco to Saudi Arabia).

A decade later, US President Donald Trump carved the obituary on the tombstone of that “Arab Spring” rebellion when he used the immensity of US power to strengthen US allies—such as the Arab monarchies and Israel—to the detriment of the people of the region.

What remains of the Arab Spring is a distant memory of the crowds in Cairo’s Tahrir Square; a better image of the present is that of the monarchs of Morocco and the United Arab Emirates (UAE) kissing up to Israel to please the United States.

Danger in the Eastern Mediterranean

In the Arabic-speaking countries, two sets of conflicts emerged as the people in the public plazas shook up the politics in their countries. The first was between Iran and the Gulf Arab monarchies (led by Saudi Arabia and the UAE). This had a catastrophic impact on Lebanon and on Syria. The second was the conflict between the countries with affinity to the Muslim Brotherhood (Qatar and Turkey) and the Gulf Arab monarchies. Both conflicts, inflamed by Israel, continue to threaten regional wars.

It was under pressure from Saudi Arabia and Israel that the United States concocted a “nuclear threat” from Iran and drove an agenda that resulted in the 2015 Iran deal. Several of the Iranian nuclear scientists were, meanwhile, assassinated from 2010 to the present; Iran blames Israel and the United States for these killings. Sanctions and threats of military intervention have now almost become normal. The gravity of this conflict is undiminished and will not decrease even if US Presidential-elect Joe Biden returns his country to the framework of the nuclear deal.

More sinister has been the deepening conflict against Qatar, but especially Turkey. In 2017, Saudi Arabia and its allies began a blockade against Qatar; the animosity is so great that Saudi Arabia planned to cut the landmass around Qatar and convert it into an island.

The discovery of massive natural gas fields in the eastern Mediterranean in 2009 changed the equation of old rivalries in the area, particularly between Israel and its neighbors, and between Turkey and Greece over Cyprus. In the past decade, alliances across the Mediterranean have cemented around control over these gas fields. Maps with conflicting claims have been published, and near-military conflicts have been hard to avert. Turkish arming of troops in Libya gave both French (June 2020) and German (November 2020) ships the opportunity to try to board Turkish vessels. The European Union threatened to put harsh sanctions against Turkey at its summit on December 10-11, but then decided to put off any decision on sanctions until the next meeting in March 2021.

France, which has exerted itself south of the Sahara Desert in the Sahel region, has now strengthened its links to the countries that stand against Turkey. Arms deals with Greece have come alongside military exercises with Egypt and with the UAE (the MEDUSA exercises that include Cyprus and Greece). France’s Emmanuel Macron honoredEgypt’s President (a former general) Abdel Fattah el-Sisi with France’s highest award.

When US Secretary of State Mike Pompeo visited France in November, he complained to Le Figaro about Turkey’s actions in the eastern Mediterranean. During his visit to Turkey after France, Pompeo avoided senior Turkish officials. The snub was clear. Israel, backed by the US, has now announced that it will increase military cooperation with Cyprus and Greece.

Turkey, meanwhile, has increased its cooperation with Russia and—interestingly—with the United Kingdom, increasingly alienated from the Europeans by its spluttering Brexit negotiations.

Trump has proposed a hallucinatory “deal of the century” that promised to sort out the long-standing occupation of the Palestinians by Israel. Nothing of the sort has been accomplished. What Trump and Pompeo have done instead is to discard a series of UN resolutions to hand Israel many of its maximum demands on a platter.

An early gesture was the announcement that the US embassy would move from Tel Aviv to Jerusalem; then came the nod for the possible full-scale annexation of East Jerusalem and the West Bank by Israel and US recognition of the Israeli occupation of Syria’s Golan Heights. The US threw around favors—such as sales of $23 billion of arms to the UAE and the removal of Sudan from the list of state sponsors of terrorism—to gain their public recognition of Israel. These weapons—particularly the F-35s—sold to the UAE allow the Gulf Arabs to continue their cruel war against Yemen.

Then, almost out of nowhere, the US recognized the Moroccan occupation of Western Sahara in exchange for Morocco’s recognition of Israel and for the Moroccan king buying $1 billion worth of arms from the United States. This deal was brokered by the UAE.

The hopes of the Palestinian, Sahrawi and Yemeni people have been seriously compromised by these cynical deals.

Recently, I’ve spent time on the phone with friends with whom I walked the length of the Arab Spring. There is little to celebrate. Friends were killed from Syria to Libya, while others remain in prison in Egypt. Great hopes have been set aside. Old cynicisms have returned, the cynicisms of arms deals and of energy deals, the cynicism of brutality.