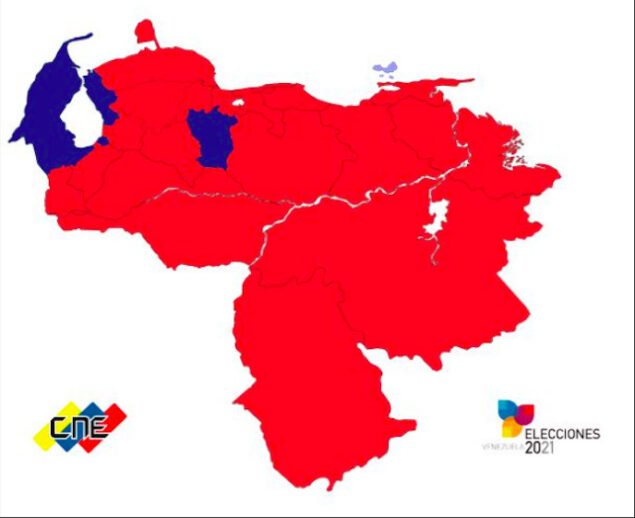 The vast majority of the governorships were won by the ruling PSUV party. (CNE)

The United Socialist Party (PSUV) landed a comprehensive victory in Venezuela’s regional and local elections on Sunday, winning 83% of the governorships. The ruling party secured at least 19 of the 23 governorships, as well as the important Caracas mayoralty according to initial results from the National Electoral Council (CNE) on Sunday night.

The United Socialist Party (PSUV) landed a comprehensive victory in Venezuela’s regional and local elections on Sunday, winning 83% of the governorships.

The ruling party secured at least 19 of the 23 governorships, as well as the important Caracas mayoralty according to initial results from the National Electoral Council (CNE) on Sunday night. The PSUV also successfully overturned rightwing incumbents in Mérida, Táchira and Anzoátegui states and held off fierce challenges in a number of others, including Miranda, Carabobo, Bolívar and Apure.

The ballot saw Venezuelans additionally elect 335 mayors, 253 regional legislators and 2,471 local councillors in what was the country’s twenty-seventh election since 1998.

The 42.3% turnout was twelve points higher than December’s parliamentary elections, bucking a recent downwards trend. Sunday’s vote saw a wider electoral offer than on past occasions, with 111 parties running including the US-backed hard-right which returned to the ballot on the Democratic Unity Roundtable (MUD) ticket. According to CNE Rector Roberto Picón, increased turnout is “the first step in reactivating politics in Venezuela and re-sewing trust in the institutions.”

Following the CNE’s initial bulletin with 91% of the votes tallied, President Nicolás Maduro addressed the nation, promising to work alongside elected opposition leaders and lauding his party’s continued hegemony. In theprevious regional elections in 2017-18 the PSUV won 19 governorships.

“With this electoral victory, we will continue consolidating peace and stability in Venezuela. We will see a new prosperity and wealth generation coming from the workplace and collective efforts. The people have decided and shown us the path. The Patria has won!” he later tweeted.

For its part, opposition forces landed three governorships, with Barinas yet to be called. In the symbolically important government heartland where former president Hugo Chávez was born and raised, PSUV forces were narrowly leading but opposition candidate Freddy Superlano has claimed the voting tallies show he will win once the numbers are final.

In Zulia, the country’s most populous state, the MUD scored a strong win in the race for governor, with former governor and 2006 presidential candidateManuel Rosales defeating incumbent PSUV governor Omar Prieto by 57 to 37%. Following his victory, Rosales, who is already being projected as a potential 2024 presidential candidate, took to Twitter telling supporters that “hope had won” in the oil-rich region. The opposition alliance also won the mayoral race in the Zulia state capital of Maracaibo. The hardline sectors likewise scored a surprise and inaugural victory in the rural and traditional government stronghold state of Cojedes.

For its part, the more moderate right Democratic Alliance landed just one victory after backing Morel Rodríguez of the recently formed Neighborhood Force. He beat the PSUV’s Dante Rivas by 43 to 39% in Nueva Esparta state. Despite strong candidates, opposition splits saw the alliance fail to make inroads in Anzoátegui, Táchira, Lara and Carabobo states, which were all won by the PSUV.

The fourth major bloc running ̶ the leftwing APR ̶ did not score any governorships but raised its vote percentages in a few states, including Portuguesa (10%).

Complete mayoral, regional legislator and local councilor results are still to be fully announced, but a more diverse political map is expected following recent electoral reforms benefiting smaller parties. With 13 of 335 mayoral races still to call, the CNE indicated that the PSUV had won 205, the MUD 59, the Democratic Alliance 37 and other unnamed parties 21.

Despite winning most of the governor races, the ruling PSUV secured only 45.7% of the vote, compared to 54.3% for anti-government forces. In addition to the three states won by the opposition, analysts have been quick to speculate that opposition splits allowed government victories in many regions. According to CNE data, a unified right may have won Apure, Barinas, Bolívar, Falcón, Guárico, Lara, Mérida, Monagas, Táchira, Trujillo and Yaracuy states, many of which are traditional Chavista strongholds. Likewise, no party won more than 50% of the vote except in Zulia (MUD), Delta Amacuro (PSUV) and Caracas (PSUV).

The voting process unfolded in a largely peaceful climate, with the only major issues coming in Zulia state.

According to a Communist Party of Venezuela (PCV) press release, over 800 people were denied their right to vote in Jesús María Semprun municipality after “grave violence and vandalism” and police tear gas forced a number of voting centers to be temporarily closed. While the causes of the violence remain unclear, the PCV has pointed to the local PSUV mayor and claimed “sabotage” against their candidate, who it alleges had a “great chance of victory.” The municipal race is yet to be called by the CNE.

Elsewhere in Zulia, local media reported that one man had died in a shooting outside a voting center and, in an unrelated incident, MUD candidate Eduardo Labrador claimed to have been attacked in San Francisco municipality.

Sunday’s vote was overseen by over 300 international observers from 55 countries and a host of international organizations, including the Carter Center, United Nations, the Latin American Council of Electoral Experts (CEELA) and the European Union (EU). CEELA president Nicanor Moscoso praised the process and claimed it had “consolidated Venezuela’s democratic institutions.” Other missions, including the EU, are due to present their findings on Tuesday.

International reaction to the elections has been slow, with Brussels yet to comment. For its part, the US State Department rejected the vote as “flawed” and “grossly skewed,” claiming that the Maduro government had “deprived” the country of a free and fair election. No evidence was offered to back up the claims.

“We commend the political parties and candidates as well as voters who decided to participate in this process despite its flaws to preserve and fight for much-needed democratic space,” Secretary of State Antony Blinken wrote in a statement while reiterating support for self-proclaimed “Interim President” Juan Guaidó.