Interview with Grzegorz Rossolinski-Liebe by Christopher Hale on 15 March 2012, posted to ‘Defending History’ website in May 2014. 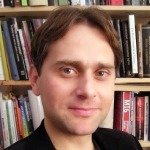 Christopher Hale: Can you briefly describe the subject of your doctorate?

Grzegorz Rossolinski-Liebe: The title of my dissertation is “Stepan Bandera: The Life and Afterlife of a Ukrainian Fascist, 1909–2009.” Bandera was both a person and the symbol of Ukrainian nationalism. Therefore I combine Bandera’s biography with the study of his political myth and cult of personality before and after his death. Bandera’s political myth appeared already in the 1930s and it has remained potent until today.

I describe in ten chapters on almost 600 pages Bandera’s life between 1909 and 1959 and his cult and myth from the 1930s until 2009. I tried to interlink these both subjects and to make clear why Bandera actually did not “die” after his assassination on 15 October 1959 in Munich. So in addition to exploring Bandera’s biography I also explored how Bandera’s admirers commemorated and celebrated him after his death. I was especially interested in the question how veterans of the Organization of Ukrainian Nationalists (OUN), the Ukrainian Insurgent Army (UPA) and of the Waffen-SS Galizien Division prolonged the Bandera cult after World War II. For this purpose I studied the Ukrainian émigré communities. I was especially interested in the Cold War period and the method of how the political émigrés incited their children born in countries like Australia, Austria, Brazil, Belgium, Canada, Germany, United Kingdom, and United States of America to admire Bandera and to honor him as one of the greatest heroes of the Ukrainian nation who, according to them, died for Ukraine like a true martyr.

CH: How would you characterize the OUN?

… Read the full interview at the link above.