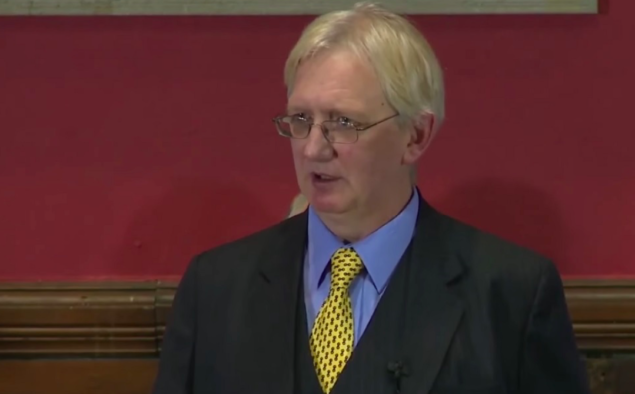 Craig Murray, a former UK diplomat turned anti-war activist, has been charged with contempt of court for writing blog posts. He faces a possible two years in jail, with no jury and no freedom of speech defense permitted.

The renowned British peace activist and former diplomat Craig Murray has been charged with contempt of court for writing blog posts.

The suspicious indictment represents a heavily politicized, Kafkaesque case in which Murray has virtually none of his rights guaranteed. It also appears to be a part of the British government’s aggressive crackdown on the Scottish independence movement.

In comments to The Grayzone, Murray described the case against him as a thoroughly undemocratic attack on free speech, and warned it may be punishment for his dissident journalism and activism exposing the UK’s crimes and lies.

Murray said he faces the possibility of “no jury, no ‘beyond reasonable doubt’ test, no public interest defence allowed, no freedom of speech defence allowed, and up to two years in jail and an ‘unlimited’ fine.”

Craig Murray served as Britain’s ambassador to Uzbekistan from 2002 to 2004. The UK Foreign Office fired him for his exposure of British and US involvement in egregious human rights violations in the country. Murray had blown the whistle on torture, warning that the CIA was using highly dubious intelligence obtained from tortured detainees.

Since leaving the UK diplomatic service, Murray has become a prominent human rights activist who maintains a popular blog at his personal website.

On his blog and through social media, Murray has established himself as an outspoken supporter of WikiLeaks and its publisher Julian Assange, who is being tormented in Britain’s high-security Belmarsh prison while awaiting potential extradition to the United States.

In recent years, Murray has brought to light an array of US, British, and Israeli government crimes. He poked holes in Britain’s accusations that Russia poisoned double agent Sergei Skripal under official government orders. And in recent months, he has publicly excoriated the UK’s hypocrisy in a scandal involving Anne Sacoolas, a CIA operative who killed the British teenager Harry Dunn after she collided into him while driving on the wrong side of the road outside of a US Air Force spying station.

A resident of Scotland’s capital Edinburgh, Murray has been especially outspoken in his support for the country’s independence from the United Kingdom. His pro-independence agitation appears to be a key factor in his persecution at the hands of the government.

With Brexit looming and a grassroots movement still building for Scottish independence, Britain has ramped up its crackdown on dissent.

One of the most recognizable faces of the independence movement, Alex Salmond, has become a major target of the backlash. Salmond, who served as leader of the Scottish National Party (SNP) for more than two decades, was forced to resign from the party in 2018 after facing allegations of sexual assault by several women.

Craig Murray published a series of blog posts alleging questionable conflicts of interest and blatant irregularities in Salmond’s case, suggesting a politicization of the allegations. He also revealed some of the accusers’ suspicious ties to the police and to Salmond’s political rivals.

In the end, a majority-women jury found dropped all 14 charges against Salmond. The government in turn admitted to violating its own laws in the case, and wound up paying out hundreds of thousands of pounds worth of Salmond’s legal fees.

Since Salmond was pushed out, the SNP has lurched to the right. His replacement as the SNP’s new leader, Nicola Sturgeon, is a centrist who is less committed to Scottish independence and much more politically dubious. Sturgeon has expressed admiration for Henry Kissinger, and has praised Hillary Clinton, blaming the US presidential candidate’s defeat not on her neoliberal politics and lackluster campaign but rather on misogyny.

Murray attended two days of Salmond’s trial and published lengthy blog posts on the proceedings. The court refused to grant him media credentials, and subsequently banned him from the trial in a highly suspect move that was initiated by the prosecution, not the judge, as Murray later discovered.

On April 24, Murray published an article revealing that police were intimidating him and other journalists and activists who spoke out about the Alex Salmond case.

Murray said he knows four pro-independence activists who were called or visited by police. Some were threatened with charges of contempt of court for their social media posts on Salmond. Police subsequently raided the house of a Scottish journalist and confiscated his computers and phones.

Murray was the next victim, charged with contempt of court over his blog posts on the Salmond case — even after all the charges against Salmond were dropped.

“This is a blatant, one-sided political persecution. That much is entirely plain,” Murray wrote. He decided to make the indictment against public (PDF link here).

“This indictment is the basis on which they are attempting to put me in prison – in fact the indictment specifies up to two years in jail and an unlimited fine as the punishment sought from the court,” Murray stated.

“The state believes it has finally discovered a way to put me in prison without the inconvenient hurdle of a jury of my peers,” he continued. “Contempt of Court is just decided by a judge. It is extraordinary that you can go to jail for a substantial two years with no jury protection and no test of ‘beyond reasonable doubt’; and on the whim of a judge defending what he may view as the dignity of his own office. This really is the epitome of bad law. To use it against freedom of speech is disgusting.”

Murray also lamented that the “prosecution is taking a terrible toll on [his] family.”