Disinformation, subterfuge, and the Guardian’s campaign against Julian Assange 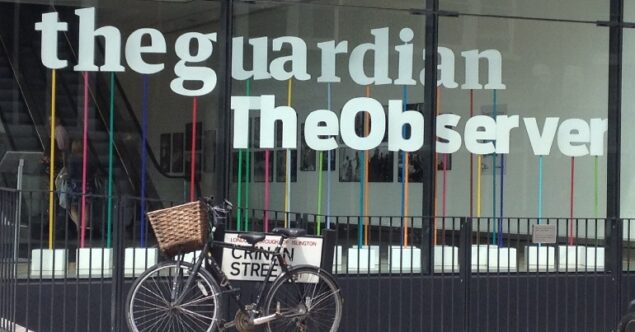 A ruling is reported to be “shortly due” on the US appeal against a decision refusing the extradition of WikiLeaks founder Julian Assange. This comes after a recent article that revealed talks between a Guardian journalist and a ‘source’ within the surveillance agency that monitored Assange’s activities and his guests in the Ecuadorian embassy in London.

A ruling is reported to be “shortly due” on the US appeal against a decision refusing the extradition of WikiLeaks founder Julian Assange. This comes after a recent article that revealed talks between a Guardian journalist and a ‘source’ within the surveillance agency that monitored Assange’s activities and his guests in the Ecuadorian embassy in London.

In the wider context, there are also claims going back years that the Guardian published fake news about Assange, and in doing so may have helped provide support to US authorities.

The latest claims are by journalists John McEvoy and Pablo Navarrete. They published details of conversations between Guardian journalist Stephanie Kirchgaessner and a “source” within surveillance agency UC Global in 2018. Kirchgaessner sought confirmation of plans that would enable Assange to leave the Ecuadorian embassy.

UC Global head David Morales is currently on trial in Spain. He’s accused of organising the surveillance of Assange. Journalist Max Blumenthal claimed that UC Global directly passed intelligence on Assange to people with links to US intelligence agencies.

In an exclusive interview with The Canary, former Ecuadorian consul Fidel Narváez stated that the story was “completely false”:

Ecuador has never even considered the possibility of moving Assange out of the embassy without the consent of the UK. That is why the Guardian’s article is completely false.

Aitor Martinez, a lawyer who “oversaw Ecuador’s effort to grant Assange diplomatic protection”, also denied the Guardian’s claim. He said the WikiLeaksfounder had not the slightest intention of moving to Russia.

appeared to know about the relationship between UC Global’s activities at the Ecuadorian Embassy in London and the security company’s proximity to Trump megadonor Sheldon Adelson almost a year before it became public knowledge.

If correct, the question arises why that information was not publicised at the time?

Also, surely the Guardian would have realised that its story on Assange’s plan to leave the embassy would assist US authorities and likely see more security measures imposed? Indeed a leaked document indicated that, according to Morales, the Americans contemplated undertaking certain drastic measures, including poisoning Assange.

The answers to both questions may lie with the Guardian’s apparent rift with Assange, stemming back to 2011.

The Guardian was one of several newspapers and other media outlets around the world that partnered with WikiLeaks. It published the Iraq war logs, the Afghan War logs, and the US embassy cables.

In March 2020, The Canary reported how Guardian journalists David Leigh and Luke Harding published WikiLeaks: Inside Julian Assange’s War on Secrecy in 2011. Controversially, the book provided a password to unredacted US cables.

Guardian journalist James Ball stated at the time that “It’s nonsense to suggest the Guardian‘s WikiLeaks book has compromised security in any way”. However, WikiLeaks editor-in-chief Kristinn Hrafnsson made it clear he viewed what Leigh did as irresponsible:

David Leigh again dismisses his responsibility for the release of the unredacted cables. He posted a password for its encrypted file – in his book. Now claims Assange told him the password was temporary. Leigh himself writes in his book about a temporary WEBSITE. Not the same. pic.twitter.com/e1q9GUdDlg

Perhaps he was removed because of his right-wing credentials – journalist Ben Norton saying how Villavicencio’s anti-Correa activities:

appears to have been funded by the US government’s National Endowment for Democracy. ..Villavicencio served as an advisor for Pachakutik National Assembly member Cléver Jiménez, who helped lead the 2010 coup attempt against Correa.

In December 2018, The Canary published an article in which Narváez claimed that assertions by the Guardian regarding Manafort visits were entirely false. Journalist Glenn Greenwald referenced our exclusive:

* No other media outlet has confirmed
* No photos or video evidence has emerged
* The @guardian refuses to answer questions
* Ex-diplomat in Embassy said story is "fake" https://t.co/QdQUDDVZq3

Manafort considered taking legal action against the Guardian, saying that the story was “totally false and deliberately libellous”:

Paul Manafort, in statement issued via his representative, denies meeting Julian Assange or being "contacted by anyone connected to Wikileaks, either directly or indirectly.” pic.twitter.com/Zkyn9rIfzI

Wrong side of history

In April 2017, Ecuador elected right-wing president Lenín Moreno. On 5 April 2019, The Canary reported that Assange feared he was under “imminent threat” of eviction from the Ecuadorian embassy. Around the same time, Moreno accused WikiLeaks of being behind corruption allegations. On 11 April 2019, embassy staff let British police into the building to arrest Assange, a citizen of Ecuador. The raid was followed by a new trade deal between Ecuador and the UK on 15 May. On the same day, Ecuador signed a memorandum of understanding with the US.

To quote Cook on Assange’s arrest and subsequent prosecution:

Assange had to be made to suffer horribly and in public – to be made an example of – to deter other journalists from ever following in his footsteps. He is the modern equivalent of a severed head on a pike displayed at the city gates.

Media organisations representing 600,000 journalists worldwide have condemned Assange’s prosecution and called for his release. Even the Guardian, in December 2020, issued an editorial condemning his prosecution. Meanwhile, the date for the next court hearing for Assange is yet to be announced.