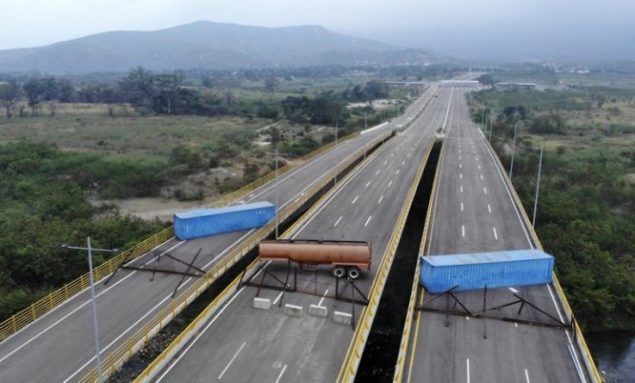 According to this article, which originally appeared in the Spanish language website Alba Ciudad, the story about the so far thwarted attempt by the US to deliver so called humanitarian aid currently doing the rounds on the mainstream news channels is not what it seems, the aid has become weaponized and the “blocked” road has never in fact been operative.

Diosdado Cabello, president of the National Constituent Assembly of Venezuela, responded to US Senator Marco Rubio, who accused the Venezuelan government of allegedly blocking the Las Tienditas international bridge, which connects Táchira state with Cúcuta in Colombia.

On Wednesday morning, photos of containers and a gandola blocking the passage on the Las Tienditas bridge went viral. It was alleged that the Venezuelan government had closed the bridge, which was built between 2014 and 2016 and that, in reality, has never been put into operation.

In his Twitter account, Republican senator Marco Rubio tweeted that Venezuelan President Nicolás Maduro allegedly moved containers to the bridge to “block the entry of humanitarian aid for the people of Venezuela,” while the US Secretary of State, Mike Pompeo, tweeted the same photo saying that “the Venezuelan people desperately need humanitarian aid. The United States and other countries try to help, but the Venezuelan military, following orders from Maduro, is blocking the passage with trucks and fuel tanks. ”

In this regard, Cabello explained during his program Con El Mazo Dando that “the Venezuelans and Colombians who live around that bridge know that this bridge has never been used. It’s closed since 2016. ” He added that “that bridge was built by Venezuela alone by Colombian request “. He pointed out that when he was Minister of Infrastructure during the government of Hugo Chávez, the then Foreign Minister of Colombia, María Ángela Holguín, came to his office to propose he build that bridge and “that Venezuela run all expenses, because Colombia could not. That bridge was made, we could not open it because they did not want to collaborate. ”

The Venezuelan people desperately need humanitarian aid. The U.S. & other countries are trying to help, but #Venezuela’s military under Maduro's orders is blocking aid with trucks and shipping tankers. The Maduro regime must LET THE AID REACH THE STARVING PEOPLE. #EstamosUnidosVE pic.twitter.com/L4ysYJaM6H

Since his self-proclamation as alleged interim president on January 23, totally irregular but supported by the United States, the opposition deputy Juan Guaidó has threatened the entry by force of “humanitarian aid” to Venezuela, which allegedly would be accompanied by military troops, which has led the Venezuelan government to reject it, indicating that it is an underhanded form of military intervention in the country.

Even the International Red Cross, an organization that participates in the delivery of humanitarian aid, has said that it would only participate in the operation if it is approved by the government of the receiving country, in this case that of Nicolás Maduro, and that it would not do so in those cases in which political bias was shown towards one side.

The position of the Venezuelan government is that, if you want to help Venezuela, what governments in other countries must do is unlock several billion dollars that the Venezuelan state has in accounts in US and European banks, as well as in the EuroClear system, but that these countries have frozen as part of their “sanctions” against Venezuela.

The United States has barely offered 20 million dollars to Venezuela and Europe about 50 million dollars as part of a humanitarian aid that, according to the deputy Juan Guaidó, will reach only 20 thousand people.

In this regard, Cabello recalled that, while they say that they will bring humanitarian aid to 20 thousand people, the government delivers 6 million boxes of CLAP (food) to families every month. Referring to the humanitarian aid promised by Guaidó, he indicated that “that’s a show!”, And that they are very likely looking to carry out acts of corruption.

On the plans to forcefully enter the country, Cabello told Rubio: “If they come, they will come to an irregular war. Get ready for what comes out of that! Do not think that the thing is going to be 2 + 2 is 4 “. He also reminded him, regarding the containers placed on the Venezuelan side of the bridge, that “with our roads, we can do whatever we want, because here there is a sovereign and independent government.”