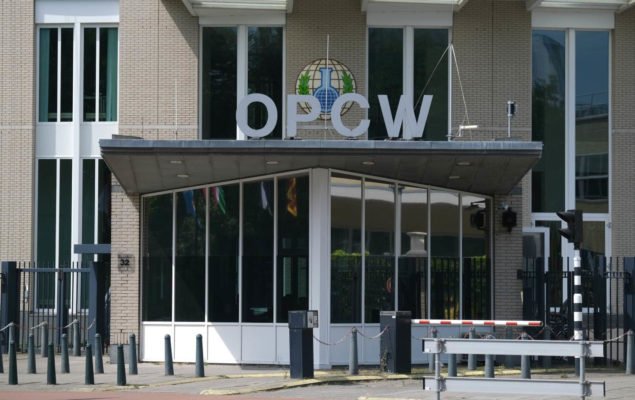 The Organisation for the Prohibition of Chemical Weapons headquarters in The Hague, Netherlands.(Yuriko Nakao / Getty Images)

The American media is ignoring leaks from the Organization for the Prohibition of Chemical Weapons that suggest a whitewash.

A series of leaked documents from the Organization for the Prohibition of Chemical Weapons (OPCW) raise the possibility that the Trump administration bombed Syria on false grounds and pressured officials at the world’s top chemical weapons watchdog to cover it up. Two OPCW officials, highly regarded scientists with more than 25 years of combined experience at the organization, challenged the whitewash from inside. Yet unlike many whistle-blowers of the Trump era, they have found no champion, or even an audience, within establishment circles in the United States.

The Trump administration’s April 13, 2018, bombing of Syria came days after it accused Syrian forces of killing nearly 50 people in a chemical weapons attack on Douma, a Damascus suburb. Widely circulated video footage showed scores of dead bodies inside an apartment complex and another group of alleged gas attack victims treated at a hospital. Although the White House did not provide evidence for its allegations against Syria, the harrowing images convinced Congress and the media to cheer on military strikes (as they did under similar circumstances the year prior).

Yet there were early grounds for skepticism. The Syrian government was on the verge of retaking the last Douma holdouts of Jaysh-al-Islam, a Saudi-backed militia that was relentlessly shelling the Syrian capital. To suddenly deploy chemical weapons would mean that Syrian forces knowingly crossed the “red line” that would trigger US military intervention. Subsequent reporting from British journalists Robert Fisk of The Independent, BBC producer Riam Dalati, and James Harkin’s investigation for The Intercept found evidence that the civilians filmed in the hospital were not exposed to toxic gas.

The US government narrative received a boost in March 2019 when the OPCW issued a long-awaited final report. It concluded that there are “reasonable grounds” to believe that a chemical weapons attack occurred in Douma and that “the toxic chemical was likely molecular chlorine.”

The report, however, was not the OPCW’s last word. Since May 2019, internal OPCW documents, including a trove published by WikiLeaks, reveal that the Douma investigators’ initial report reached different conclusions than their organization’s published version. They were overruled by senior officials who kept evidence from the public.

The leaks’ key revelations include:

The OPCW leadership has yet to offer a substantive explanation for why they excluded critical findings and radically altered the original report. Instead, it has denigrated the two members of the Douma fact-finding mission team who challenged the manipulation of their investigation.

The first dissenting inspector is known only as Inspector B (his identity is publicly unconfirmed). B was the Douma mission’s scientific coordinator, the primary author of the draft report, and subsequent author of the e-mail of protest about the unwelcome editing.

The second inspector, described by the OPCW as Inspector A, is Ian Henderson, a chemical engineering and ballistics expert who authored the study that concluded that the cylinders were likely manually placed. Henderson went to Douma and took detailed measurements at one of the cylinder locations.

In public comments, OPCW Director General Fernando Arias has claimed that the pair committed “deliberate and premeditated breaches of confidentiality,” but has not accused them of leaking the OPCW material. Arias maintains that Inspector B’s “concerns were taken seriously,” without meaningfully accounting for why findings in B’s original report were left out of the final version. He has also dismissed the pair as minor players who refused to accept that their conclusions were “erroneous, uninformed, and wrong.”

Yet the two inspectors are unlikely candidates to go rogue. Henderson and Inspector B had served with the OPCW for 11 and 16 years, respectively. Internal OPCW appraisals of their job performance offer effusive praise. In 2005, a senior OPCW official wrote that Henderson has consistently received “the highest rating possible.… I consider [him] one of the best of our Inspection Team Leaders.” Inspector B, an OPCW superior wrote in 2018, “has contributed the most to the knowledge and understanding of CW [Chemical Weapons] chemistry applied to inspections.” In a different evaluation, another manager described B as “one of the most well regarded” team leaders, whose “experience of the organisation, its verification regime, and judgment are unmatched.”

The internal praise for the inspectors contrasts with what the OPCW leadership now says about them in public. This includes making untrue statements. Arias has said that Henderson “was not a member of the FFM [fact-finding mission]” in Douma, but leaks that I obtained show that claim to be false. Contemporaneous OPCW documents describe Henderson as an FFM member and list him among the “Mission Personnel” and the group of inspectors on the Douma mission.

The two inspectors are also not the only ones to raise concerns. Earlier this year, another OPCW official told me, on the condition of anonymity, that they were “horrified” by the “abhorrent…mistreatment” of the pair. “I fully support their endeavours,” the official wrote. “They are in fact trying to protect the integrity of the organisation which has been hijacked and brought into shameful disrepute.”

The treatment of the whistle-blowers by Western media is also due for criticism. Despite the story’s explosive nature, it has elicited a collective yawn. Whereas previous WikiLeaks disclosures fueled entire news cycles, no major US media outlets have reported on the organization’s Douma archive. CNN and MSNBC, which both supported Trump’s decision to bomb Syria, have ignored the OPCW story. The only time a New York Times reporter has mentioned the Douma scandal was in passing. The Times downgraded the extensive OPCW leaks into a mere “email from an investigator.” (It also deferred to assurances of Syria’s culpability from Bellingcat, an open source investigative outlet, without mentioning its Western government funding, including from the United States via the National Endowment for Democracy.) Even progressive, adversarial outlets that have traditionally defended whistle-blowers and challenged US wars have shunned this story. The Guardian described the whistle-blowers’ claims as “a Russia-led campaign,” rather than as an effort by two veteran inspectors to defend their investigation.

What explains the prevailing silence? It is certainly true that the Syrian government and its Russian ally have vigorously denied allegations of chemical weapons use, including in Douma. But just as was the case when Iraq was falsely accused of possessing weapons of mass destruction, skepticism of Western claims should not be equated with support for the targeted regime. If anything, the Iraq case reminds us that such allegations should not be politicized and are worthy of scrutiny, especially if used to justify military action and other aggressive measures, including crippling sanctions.

The possibility that the United States may have bombed Syria based on falsehoods—and pressured a global investigative body to grant that intervention legitimacy after the fact—should break the media blockade. So too should the fact that it was exposed by whistle-blowers who face risk for speaking out.

The US government’s own recent past with the OPCW offers a stark reminder. In 2002, the Bush administration forced out the organization’s first director general, José Bustani. The veteran Brazilian diplomat was negotiating weapons inspections with Baghdad that potentially impeded the Bush administration’s drive to launch a war. Bustani has since revealed that John Bolton, then serving as an undersecretary of state, personally threatened him and his family to force him to resign.

Bustani once again finds himself on Bolton’s opposing side. In his new memoir about his tenure as Trump’s national security adviser, Bolton recounts that he oversaw the US strikes on Syria over the Douma allegations, lamenting only that Trump did not authorize a larger attack. Bustani, meanwhile, took part in an October 2019 panel that heard an extensive presentation from one of the Douma whistle-blowers.

“The convincing evidence of irregular behaviour in the OPCW investigation of the alleged Douma chemical attack confirms doubts and suspicions I already had,” Bustani wrote. “The picture is certainly clearer now, although very disturbing.” His hope, he added, is that the outcry over the Douma leaks “will catalyse a process by which the [OPCW] can be resurrected to become the independent and non-discriminatory body it used to be.”

Bustani is among the prominent signatories of a letter urging the OPCW to let the Douma inspectors discuss their investigation freely. Henderson delivered a statement at a UN session in January, but the United States has thwarted other attempts. (According to Russia’s envoy to the OPCW, a US representative objected on the grounds that a Douma hearing “would encourage the Russian [side] to replicate Stalinist trials, with cross-examinations and intimidations of witnesses.”)

The inspectors just want to be heard. In statements this year to Arias, both whistle-blowers requested an opportunity to air the Douma evidence in a transparent, scientific manner. “Our sole duty is to be true to the facts and the science, and once that has been achieved, we will gladly accept the proven and agreed scientific outcomes,” Henderson wrote.

“Something had gone wrong inside the OPCW sir,” B told Arias. “And we wanted you to know. It’s that simple.”