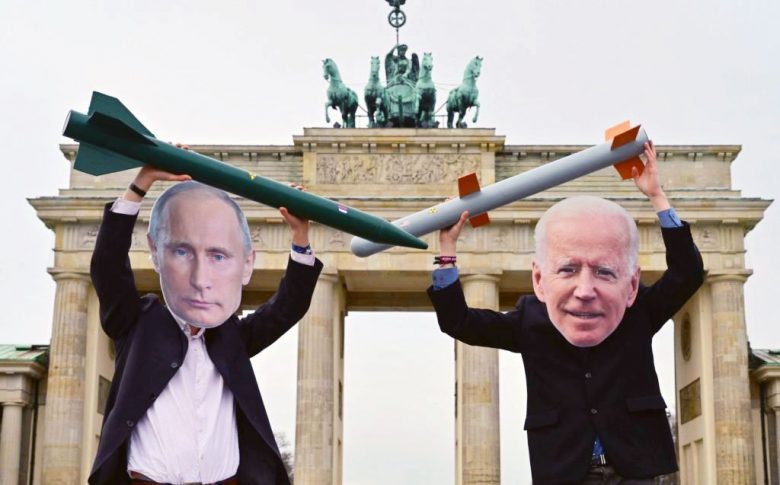 Get your proxies out (John MacDougall /AFP via Getty Images)

Biden doesn’t just want to weaken Russia argues Thomas Fazi. He considers the possibility that the US strategy in Ukraine is not only aimed at weakening Russia, but also Germany, concluding that it is a terrifying prospect and one that German elites can’t afford to discount.
________________________

All of Europe is suffering as a result of the energy crisis, but for the continent’s largest economy, this is more than just an economic crisis — it’s an existential one. Once hailed as Europe’s economic powerhouse, Germany is now being labelled its “weakest link”.

A recession next year is now considered almost certain; industrial production is down 9% on last year; inflation has soared to double digits for the first time since the Second World War. Given Germany’s deep-seated inflation-phobia, all this is problematic enough. But even more traumatic for the country is the fact that Germany is now running a negative trade balance — the first time this has happened in more than 30 years. This is a very tough pill to swallow for a country where export-led growth is more than just an economic model — it’s part of its national identity.

But those days are over. The German economic machine has broken down. First it was battered by the global lockdowns of 2020 and 2021, which disrupted global supply chains, forcing German industries to pay more for increasingly scarce components that they once bought from China. The pandemic also lowered growth in key Asian export markets — first and foremost China.

Then came the Ukraine conflict and the stream of Western sanctions, which have sent the price of gas (and other raw materials) soaring and further destabilised supply chains. Weighed down by rocketing energy prices, nearly one in six industrial firms in Germany are now reducing or abandoning production.

In light of the above, it’s easy to understand why the German chancellor Olaf Scholz warned of an extended crisis, one that “won’t pass in a few months”. That’s an understatement. Two of the main pillars of Germany’s economic success in the 21st century — cheap imports of raw materials and energy (especially from Russia), and high demand in the rest of the world — have been pulled from under the country’s feet, and they aren’t likely to come back any time soon.

Looking back on recent events, however, one can’t help but wonder: was this just the result of a series of unfortunate events and, some would say, Germany’s pandering to Russia and myopic obsessions for exports, which left the country extremely vulnerable to external shock? Is Germany just a collateral victim of the United States’ proxy war against Russia? Or could Germany have been a target of economic warfare itself?

This latter question is impossible to ignore following the recent attack on the part-German-owned Nord Stream gas pipelines connecting Russia to Germany. Even though Western governments and commentators have been quick to point the finger at Russia, Jeffrey Sachs, the US economist and Columbia professor, recently voiced an opinion shared by many: that the act of sabotage on the pipeline is more likely to have been “a US action” — one directed first and foremost at Germany. A similar claim was also made by Douglas Macgregor, a retired US Army colonel and former advisor to US Defense Secretary in the Trump administration. And then there’s the now-infamous tweet (subsequently deleted) by Radek Sikorski — Poland’s former foreign minister and current chairman of the European Parliament’s EU-US delegation — who published an image of the Nord Stream leak along with the words “Thank you, USA”.

It’s not hard to see why so many people are inclined to view this as a US action rather than a Russian one. While it’s unclear how Russia would benefit from losing the leverage the pipeline offered it over Germany and other European states, the US, on the other hand, has a lot to gain from putting Nord Stream out of action — possibly forever, according to German sources. (Russia disputes the damage and claims the pipeline could be repaired and reopened soon, but that Western authorities won’t allow Russia to inspect the pipelines.)

It’s no secret that the US has always been opposed to Nord Stream, and in particular to Nord Stream 2, a new pipeline parallel to Nord Stream 1 (in operation since 2011) that was completed in 2021 and was expected to enter into service in 2022, doubling the annual supply of Russian gas to Germany. It’s easy to see why the US establishment wasn’t happy about this development: more gas would have meant stronger Russian-German relations, which would have likely led to an expansion of trade, increased cultural exchanges, and ultimately to a new security architecture that would have made Nato’s security umbrella increasingly redundant and weakened US hegemony over the European continent.

This is why the United States has been attempting to torpedo the project since 2017, when the US Congress under Trump passed the Countering America’s Adversaries Through Sanctions Act (CAATSA), which authorised the US president to impose sanctions on companies involved in the construction of Russian energy export pipelines. Then, in 2019, Trump signed the Protecting Europe’s Energy Security Act (PEESA), which sought to prevent the construction of the pipeline through US sanctions against the companies involved, causing the pipe-laying to stop for a year. More recently, both Biden and Victoria Nuland, Under Secretary of State for Political Affairs in the Biden administration, known for her famous “Fuck the EU” phone call, had threatened to shut down Nord Stream 2 if Russia invaded Ukraine.

Until not long ago, the German public still viewed this as an undue meddling in the country’s internal affairs, if not — as then-Foreign Minister Sigmar Gabriel said in early 2021 — as an encroachment on Germany’s sovereignty in violation of international law. German newspapers openly discussed how the US was opposed to Nord Stream because it hoped to replace Europe’s Russian gas with the sale of its own liquified natural gas (LNG) to the continent.

A vocal critic of the US’s meddling in German energy affairs was the former head of the German Energy Agency, Stephan Kohler. In a 2017 interview, he pointed out that the US openly argued in the CAATSA bill that the aim was creating better market opportunities for its LNG. On another occasion, Kohler said that this was part of a wider strategy to “drive a political wedge between Europe and Russia”.

It appears, then, this cannot be written off as a conspiracy theory. In fact, one of America’s best-known geostrategists, George Friedman, former chairman of the private intelligence firm Stratfor, wrote in his 2010 bestselling book The Next Decade: “Russia does not threaten America’s global position, but the mere possibility that it might collaborate with Europe and particularly Germany opens up the most significant threat in the decade, a long-term threat that needs to be nipped in the bud”. This led him to conclude that “maintaining a powerful wedge between Germany and Russia is of overwhelming interest to the United States”. More recently, Friedman stated this in even starker terms: “The overriding interest of the United States, for which we have fought wars for centuries — the First, Second and Cold War — has been the relationship between Germany and Russia, because united there they are the only force that could threaten us. And we need to make sure that doesn’t happen.”

So, this has been semi-official US policy for quite some time. And while one may disagree with the theories surrounding the pipeline attack, and the origins of the Ukraine conflict more in general, it’s hard to disagree with the consequences: it has jeopardised (for the foreseeable future) Russian supplies, destroyed Germany’s export-led growth model, and “driven a powerful wedge” between Germany and Russia.

At the same time, Germany, as it strives to replace Russian gas, has turned to the United States, which now provides (at “astronomical prices”, according to the German economy minister) 45% of European LNG imports — up from 28% in 2021. So overall, it’s hard to deny that the US is clearly benefiting from the European energy crisis in general, and from the recent pipeline attack in particular. No doubt that’s why US Secretary of State Antony Blinken said that the Nord Stream attack offers a “tremendous opportunity” to end Europe’s dependency on Russian energy — a strange choice of language for what effectively amounts to a terrorist attack on a strategic infrastructure of a Nato ally. He also confirmed that the action would directly benefit the US: “We’re now the leading supplier of LNG to Europe,” Blinken added.

It should also be noted that the attack came at a time when the German government was coming under growing pressure to end the sanctions. Just a week before, large demonstrations had taken place in Germany calling for the commissioning of Nord Stream 2 to resolve the energy crisis.

Now, all this may very well be a case of unintended benefit for America. However, the mounting evidence forces us to ask an uncomfortable question: could the US strategy in Ukraine be aimed not only at weakening Russia, but Germany as well? It’s a terrifying prospect, but one that German elites can’t afford to discount.

Thomas Fazi is a writer, journalist and translator. His latest book Reclaiming the State is published by Pluto Press. 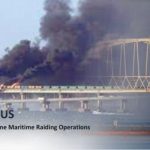 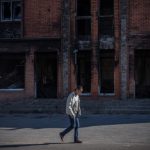