Interview with Victor Shapinov, a leader of Union Borotba (Struggle), published on the website of Borotba, Jan 11, 2015

Victor Shapinov traveled to the Donetsk People’s Republic (DNR) in late December with a group of Borotba colleagues. Three of them were detained by soldiers from the Vostok Battalion (Commander Alexander Khodakovsky) and spent almost two weeks in detention “in the basement” in Donetsk.

How did you get “in the basement” of the Vostok Battalion? What charges were brought against you? 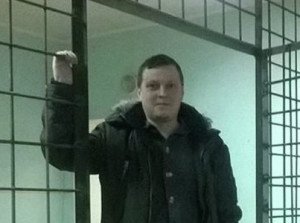 We should never have been in the “basement” of the Special Division of the Vostok Battalion. “The basement” is for those who have committed some offense, and we were held there for all 13 days of our detention. In fact, we had come to Donetsk on an official visit. We had set up meetings with ministers and leaders of the DNR People’s Soviet, including Foreign Minister Alexander Kofman, Deputy Speaker of Parliament Denis Pushilin, and Chair of the Committee on Economy and Finance Boris Litvinov.

On the day when we were detained [Dec. 21 – ed.], we did not have any scheduled meetings, and we just walked around the city, inspecting the damage inflicted by shelling. We were stopped by a patrol. The soldiers checked our documents and asked us to go with them. Contrary to various reports, we were not near the airport or military installations, but in the city, where we walked among civilians. The patrol delivered us to a base, we drove a few kilometers. From there, we were transferred to the commandant’s office, guarded by the Special Division of the Vostok Battalion. There we sat for all 13 days, not in an actual basement, but on the third floor at the former base of the Interior Troops, where the division is located.

During all this time, we were not charged and were not shown any charges. We were interrogated several times, mostly questioned about our participation in the Anti-Maidan movement and our political activities. I got the impression that the investigators of the Special Division themselves did not understand why we were detained, and all this time were trying to come up with some “sin” that could be used to hold us. When it became clear that there was nothing, they had to return us to Russia.

What details can you offer about your imprisonment? What did you see? How were prisoners treated?

We sat in the Special Division. We slept on mattresses laid on boxes. We were fed the same thing as the militia, three times a day. This was mainly porridge and bread. Sometimes soup or salad. On New Year they gave us chicken.

The main purpose of the Special Division is to check on those who for one reason or another are detained at checkpoints. A typical story: a man riding a bus home from somewhere in the Dnipropetrovsk region slept through his stop, and woke up at a DNR checkpoint. After checking – to make sure there are no photos of him in uniform on social networks, no right-wing Ukrainian symbols, etc. – he is released, usually the next day.

Imprisoned Ukrainian soldiers are kept there. On January 1, they were exchanged. They treated the captives well. They were not beaten. Everyone was fed. There was some effort to engage in political discussion. Emphasis was on the difference in how prisoners are treated. Some of the prisoners were visited by relatives, they were allowed to meet, talk, etc.

Many were militia facing discipline. For example, on January 1, five militiamen were brought in, for drunkenness, as they explained themselves. They were sentenced to 20 days of sitting “in the basement”.

During our time there, we did not see anyone beaten or any cases of ill-treatment. That does not guarantee its absence in other Special Divisions, but we did not witness any. In the end, we even exchanged phone number with our guards. However, we have heard stories of people beaten after arrest by the militia, so whether what we saw is always the case I cannot say.

In general, I want to say good things about the Special Division. The investigators tried their best to do their job. They have little experience or professional skills, but they try. Basically, it is committed people who do not work for some benefit, but “for the cause”. Salaries are equalized at 5,000 Hryvnia, but it is not always paid; for example, in December they were paid only 1.5 thousand.  A lot of people have communist beliefs, and even more are natural leftists.

What do you think about all these basements [detentions]? When will it all stop?

“The basement” is a direct consequence of the fact that the new state is not built, or is being built very slowly. The Ukrainian state in the Donbas region collapsed in the spring and summer. Real power rests with the militias. They themselves function as police, prosecutors and intelligence agencies, courts and prisons. Naturally, the militia units are different — some tried to establish a new, just order, and some used this situation to enrich themselves. There are more of the first, of course, but there are also, without doubt, the second.

There is a view that as soon as the state apparatus of the republics is set up, the chaos will immediately cease. This is only partly correct. First, there are serious forces that are not interested in the new state succeeding. Second, even when a state apparatus is built, there is no guarantee that the same vices will not sprout there.

During the Civil War of 1918-21, the ‘White’ counterintelligence often arrested people and accused them of working for the Bolsheviks — with the sole purpose of squeezing money from them. Among the ‘Reds’ this was virtually absent, as personal enrichment was forbidden, and the state apparatus had to work for the public good. So long as the People’s Republics cannot decide whether they are ‘White’ or ‘Red’, these two lines will continue to fight.

One line wants to replace the Ukrainian oligarchs, corrupt officials and bureaucrats with their own, Novorossiyan oligarchs, corrupt officials and bureaucrats. The second line really wants to get rid of oligarchic capitalism and all its charms. If the first line wins, then the ‘spin’ will not be stopped by the construction of the state apparatus, it will just become public in scale. The only way out is to make the People’s Republics really popular. But, unfortunately, not all forces want this.

Do you realize that if you were detained “in the basement” of Batman [Alexander Bednov, a militia commander killed in Lugansk on Jan. 1], whose director has the call sign “Maniac”, that you would not have left?

I, honestly, still do not understand what the story is with Batman – whether his death was really about combating lawlessness, or disposing of commanders with opposing views. Therefore, I would not want my words to be used in some way in this story.

I do not rule out the possibility of some dirty game to discredit the militias and People’s Republics. Moreover, it is possible that in this game, the militias themselves are being used blindly. For example, the strange story of our detention.

People who have always been unequivocal opponents of the Kiev nationalist regime came. They are captured by their own allies. They are held, despite the fact that top officials – ministers and deputies — declared them ‘fit’. Then they are deported to Russia for obscure reasons. I would like to ask: Has this strengthened the reputation of the DNR or hurt it? In my opinion, it clearly hurt. Maybe it’s just stupidity, maybe deliberate defamation, an attempt to discredit the DNR as “irresponsible”, because it grabs and detains its own friends.

The same is true with Batman. If what the LC prosecutor’s office says is true, then he and his entourage deserved severe punishment. But shooting him in a 90s-style ambush is not a victory for the rule of law.

In general, the solution must be political, not military. Mao Zedong, when he led a guerrilla war against the pro-American Kuomintang, said that “the gun should not control the party; the party should control the gun”. So far in the People’s Republic, the gun controls everything. And there is no “party” — in the sense of a clear ideology or understanding of what we are building. This situation contributes to the degeneration of the militia. If, in this sense, everything is left just as it is and centralized controls are created, then such a state will not have the support of the population.

The People’s Republics are the dream of people who want to build another Ukraine without Nazism, oligarchs, or corruption. If the leaders of the republics — both military and civilian — exchange this dream for fancy cars and houses, for coal trade with Ukraine, the people will not forgive them. 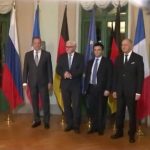