Despite its exit, the US will continue to wage war on Afghanistan 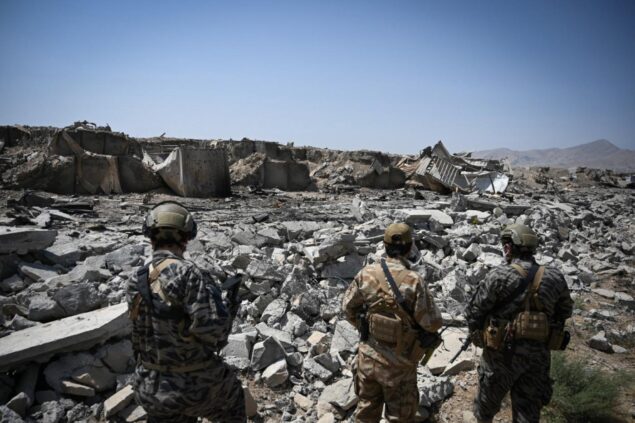 Taliban fighters walk amid the debris of the destroyed Central Intelligence Agency base in Deh Sabz, northeast of Kabul, on 6 September 2021, after the US pulled its troops out of the country (AFP)

Ever the bad loser, Washington will be tempted to crush the Taliban with sanctions and covert operations, unleashing more chaos.

The United States has always been a bad loser. Whether it has viewed itself as an imperial power, a military superpower or, in today’s preferred terminology, the “world’s policeman”, the assumption is that everyone else must submit to its will.

All of which is the context for judging the outcry in western capitals over the US army’s hurried exit last month from Kabul, its final hold-out in Afghanistan.

There are lots of voices on both sides of the Atlantic lamenting that messy evacuation. And it is hard not to hear in them – even after a catastrophic and entirely futile two-decade military occupation of Afghanistan – a longing for some kind of re-engagement.

The situation, it is implied, can still be fixed, or at the very least the Taliban can be punished as a warning to others not to follow in its footsteps

Politicians are describing the pull-out as a “defeat” and bewailing it as evidence that the US is a declining power. Others are warning that Afghanistan will become a sanctuary for Islamic extremism, leading to a rise in global terrorism.

Liberals, meanwhile, are anxious about a renewed assault on women’s rights under the Taliban, or they are demanding that more Afghans be helped to flee.

The subtext is that western powers need to meddle a little – or maybe a lot – more and longer in Afghanistan. The situation, it is implied, can still be fixed, or at the very least the Taliban can be punished as a warning to others not to follow in its footsteps.

All of this ignores the fact that the so-called “war for Afghanistan” was lost long ago. “Defeat” did not occur at Kabul airport. The evacuation was a very belated recognition that the US military had no reason, not even the purported one, to be in Afghanistan after Osama bin Laden evaded capture.

In fact, as experts on the region have pointed out, the US defeated itself. Once al-Qaeda had fled Afghanistan, and the Taliban’s chastened fighters had slunk back to their villages with no appetite to take on the US Robocop, each local warlord or tribal leader seized the moment. They settled scores with enemies by informing on them, identifying to the US their rivals as “terrorists” or Taliban.

US commanders blew ever bigger holes through the new Pax Americana as their indiscriminate drone strikes killed friend and foe alike. Soon most Afghans outside the corrupt Kabul elite had good reason to hate the US and want it gone. It was the Pentagon that brought the Taliban back from the dead.

But it was not just the Afghan elite that was corrupt. The country became a bottomless pit, with Kabul at its centre, into which US and British taxpayers poured endless money that enriched the war industries, from defence officials and arms manufacturers to mercenaries and private contractors.

Those 20 years produced a vigorous, powerful Afghanistan lobby in the heart of Washington that had every incentive to perpetuate the bogus narrative of a “winnable war”.

The lobby understood that their enrichment was best sold under the pretence – once again – of humanitarianism: that the caring West was obligated to bring democracy to Afghanistan.

That deceitful spin, currently being given full throat by politicians, is not just there to rationalise the past. It will shape the future, too, in yet more disastrous ways for Afghanistan.

With American boots no longer officially on the ground, pressure is already building for war by other means.

It should not be a difficult sell. After all, that was the faulty lesson learned by the Washington foreign policy elite after US troops found themselves greeted in Iraq, not by rice and rose petals, but by roadside bombs.

In subsequent Middle East wars, in Libya, Syria and Yemen, the US has preferred to fight more covertly, from a greater distance or through proxies. The advantage is no American body bags and no democratic oversight. Everything happens in the shadows.

There is already a clamour in the Pentagon, in think tanks, among arms manufacturers and defence contractors, and in the US media, too, to do exactly the same now in Afghanistan.

Nothing could be more foolhardy.

Indeed, the US has already begun waging war on the Taliban and – because the group is now Afghanistan’s effective government – on an entire country under Taliban rule. The war is being conducted through global financial institutions, and may soon be given a formal makeover as a “sanctions regime”.

The US did exactly the same to Vietnam for 20 years following its defeat there in 1975. And more recently Washington has used that same blueprint on states that refuse to live under its thumb, from Iran to Venezuela.

Washington has frozen at least $9.5bn of Afghanistan’s assets in what amounts to an act of international piracy. Donors from the World Bank and International Monetary Fund to the European Union, Britain and the US are withholding development funds and assistance. Most Afghan banks are shuttered. Money is in very short supply.

Afghanistan is already in the grip of drought, and existing food shortages are likely to intensify during the winter into famine. Last week a UN report warned that, without urgent financial help, 97 percent of Afghans could soon be plunged into poverty.

All of this compounds Afghanistan’s troubles under the US occupation, when the number of Afghans in poverty doubled and child malnutrition became rampant. According to Ashok Swain, Unesco’s chair on international water cooperation, “more than one-third of Afghans have no food, half no drinking water, two-thirds no electricity”.

That is an indictment of US misrule over the past two decades when, it might have been assumed, at least some of the $2tn spent on Afghanistan had gone towards Washington’s much-vaunted “nation-building” project rather than guns and gunships.

Now Afghans’ dire plight can be used as a launchpad for the US to cripple the Taliban as it struggles to rebuild a hollowed-out country.

The real aspiration of sanctions will be to engineer Afghanistan’s economic collapse – as an exemplar to others of US power and reach, and vindictiveness, and in the hope that the Afghan people can be starved to the point at which they rise up against their leaders.

All of this can easily be framed in humanitarian terms, as it has been elsewhere. Late last month, the US drove through the United Nations Security Council a resolution calling for free travel through Kabul airport, guarantees on human rights, and assurances that the country will not become a shelter for terrorism.

Any of those demands can be turned into a pretext to extend sanctions to the Afghan government itself. Governments, including Britain’s, are already reported to be struggling to find ways to approve charities directing aid to Afghanistan.

But it is the sanctions themselves that will cause humanitarian suffering. Unpaid teachers mean no school for children, especially girls. No funds for rural clinics will result in more women dying in childbirth and higher infant mortality rates. Closed banks end in those with guns – men – terrorising everyone else over limited resources.

Isolating the Taliban with sanctions will have two entirely predictable outcomes.

First, it will push the country into the arms of China, which will be well-positioned to assist Afghanistan in return for access to its mineral wealth. Beijing has already announced plans to do business with the Taliban that include reopening the Mes Aynak copper mine.

As US President Joe Biden’s administration is already well-advanced in crafting China as the new global menace, trying to curtail its influence on neighbours, any alliance between the Taliban and China could easily provide further grounds for the US intensifying sanctions.

Secondly, sanctions are also certain to deepen existing splits within the Taliban, between the hardliners in the north and east opposed to engagement with the West, and those in the south keen to win over the international community in a bid to legitimise Taliban rule.

At the moment, the Taliban doves are probably in the ascendant, ready to help the US root out internal enemies such as the ISKP, Islamic State group’s offshoot in Afghanistan. But that could quickly change if Washington reverts to type.

A combination of sanctions, clumsy covert operations and Washington overplaying its hand could quickly drive the hardliners into power, or into an alliance with the local IS faction.

That scenario may have already been given a boost by a US drone strike on Kabul in late August, in retaliation for an ISKP attack on the airport that killed 13 US soldiers. New witness testimonies suggest the strike killed 10 Afghan civilians, including seven children, not Islamic militants.

If that weren’t bad enough, Washington hawks are calling for the Taliban to be officially designated a “foreign terrorist organisation”, and the new Afghan government a state sponsor of terrorism, which would make it all but impossible for the Biden administration to engage with it. Others such as Lindsey Graham, an influential US politician, are trying to pile on the pressure by calling for troops to return.

How readily this mindset could become the Washington consensus is highlighted by US media reports of plans by the CIA to operate covertly within Afghanistan. As if nothing has been learned, the agency appears to be hoping to cultivate opponents of the Taliban, including once again the warlords whose lawlessness brought the Taliban to power more than two decades ago.

This is a gameplan the US and Britain know well from their training and arming of the mujahideen to oust the Soviet army from Afghanistan in the 1980s and overthrow a few years later Afghanistan’s secular communist government.

Biden will have an added incentive to keep meddling in Afghanistan to prevent any attacks originating from there that could be exploited by his political opponents and blamed on his pulling out troops.

According to the New York Times, the CIA believes it must be ready to “counter threats” likely to emerge from a “chaos” the Taliban will supposedly unleash.

But Afghanistan will be far less chaotic if the Taliban are strong, not if – as is being proposed – the US undermines Taliban cohesion by operating spies in its midst, subverts the Taliban’s authority by launching drone strikes from neighbouring countries, and recruits warlords or sponsors rival Islamic groups to keep the Taliban under pressure.

William J Burns, the CIA’s director, has said the agency is ready to run operations “over the horizon” – at arm’s length. The New York Times has reported that US officials predict “Afghan opponents of the Taliban will most likely emerge who will want to help and provide information to the United States”.

This strategy will lead to a failed state, one immiserated by US sanctions and divided between warlords feuding over the few resources left. That is precisely the soil in which the worst kind of Islamic extremism will flourish.

Destabilising Afghanistan is what got the US into this mess in the first place. Washington seems only too ready to begin that process all over again.