Why deny the Ukrainian Nazi connection?

The Russian Embassy in Ottawa has created quite the controversy with its latest tweets about Nazi monuments in Canada. “There are monumets (sic) to Nazi collaborators in Canada and nobody is doing anything about it,” one of the tweets noted. 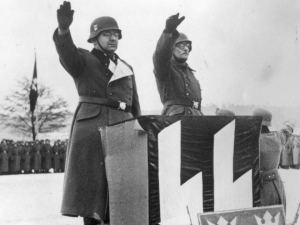 A monument in Oakville commemorates those who served with the 14th SS Galizien Division (aka 1st Galician/Galizien or the 1st Ukrainian Division). Another monument in Edmonton honors Roman Shukhevych, the leader of the Ukrainian Insurgent Army.

The Russian tweets were quickly denounced as “fake news.” The Russians, said some historians, were trying to undermine the Canadian government with false claims. Those being honoured by the monuments weren’t Nazi collaborators, they stated.

Even B’nai Brith denounced the Russian tweets. “Clearly, if there actually are monuments to Nazis in Canada we would be quite concerned about that,” Aidan Fishman, the interim director of B’nai Brith Canada’s League for Human Rights told my Postmedia colleague Marie-Danielle Smith.

“The Russian government sometimes uses the word ‘Nazi, ‘especially in the context of the Ukrainian conflict, with somewhat broader meaning than other groups would use it.” 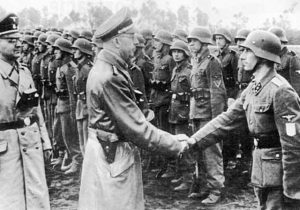 Now, the Russians are more than happy to try to embarrass the Canadian government, which has steadfastly stood behind the Ukrainian government in the ongoing conflict in the region. Suggesting that Canada allows monuments to Nazi collaborators seems to fit that bill. But in this case the Russian tweets aren’t fake news. They are accurate.

Those who served in the SS Galizien Division were Nazi collaborators. So too was Roman Shukhevych.

First let’s examine Shukhevych. Before going to to the Ukrainian Insurgent Army, Shukhevych was commander of the Ukrainian battalion called Nachtigall. The men of Nachtigall rounded up Jews in Lviv in June 1941, massacring men, women and children. The Simon Wiesenthal Center estimates that the Nachtigall Battalion, along with their German military counterparts, managed to murder around 4,000 Jews in Lviv. Other historians put the estimate at around 6,000.

Shukhevych was later assigned to a new unit whose role in Germany’s war, according to one Holocaust expert, was “fighting partisans and killing Jews.” Shukhevych later turned against the Nazis.

Then there is the SS Galizien Division. They were eager Nazi collaborators. Some 80,000 Ukrainians volunteered to join the SS, but only those who could meet the strict requirements were selected.

The SS used some of its most seasoned killers to oversee the development of its new division. SS General Jurgen Stroop, who would later be executed as a war criminal for his brutal destruction of the Jews in the Warsaw Ghetto, was brought on as an advisor. Other commanders of the division were all versed in the murder of Jews throughout occupied territories in eastern Europe.

SS Galizien Division was used by the Nazis in a variety of operations, one of the most controversial being the 1944 destruction of the village of Huta Pieniacka. Huta Pieniacka was considered a “Polish” village that just months before had been the shelter for several hundred Jews, Hale noted.

The SS units surrounded the village. Men, women and children, who had taken refuge in the village church, were taken outside in groups and murdered. Kids were executed in front of their parents, their heads smashed against tree trunks, one witness testified. Others were burned alive in houses.

“The only people who saved themselves were those who on finding out about the approaching Ukrainian SS managed to hid in the forest,” eyewitness Miecelslaw Bernacki later told investigators. Around 850 people were murdered.

Some Ukrainians dispute that the SS Galizien Division took part in the killings or they argue that only small elements from the unit – and under Nazi command – were involved.

A Ukrainian military board heard testimony in 1944 that members of the Galizien Division did take part in the attack. But that action was justified, the board was told, since the inhabitants of Huta Pieniacka had been killing Ukrainian peasants. “By the way, the Jews were hiding in the village,” a Ukrainian officer added in his testimony describing the destruction of the village inhabitants.

So why do some historians come to the defence of the SS Galizien Division?

“After Ukraine became an independent nation, many historians recast the SS division as a ‘national liberation army,’ whose sole intent had been to resist the Soviets,” wrote Hale in Hitler’s Foreign Executioners. “This is a misrepresentation. Both the formation and the conduct of the ‘Galizien’ reflect its origins in the German plans for mass murder.”

While Bnai Brith doesn’t seem to have any issues with the members of the SS Galizien Division, others clearly do. Earlier this year a Polish judge issued an arrest warrant for 98-year old Michael Karkoc, a SS Galizien deputy company commander. Karkoc, now living in the U.S., came to Galizien from the Ukrainian Self Defense Legion, along with many of his men. Before transferring to the SS unit, he is alleged to have coordinated the massacre of 44 civilians, including women and children, in the Polish village of Chlaniów in 1944.
His son says he is simply a Ukrainian freedom fighter who is being subjected to a Russian smear campaign. The Poles don’t agree. They want to extradite Karkoc.

Ukrainians see Shukhevych and SS Galizien Division members as heroes. They argue that those individuals served the Nazis because they saw them as liberators from the Russians. Their ultimate goal was an independent Ukraine. But to claim that these individuals were not Nazi collaborators is something else.

In May 1944, SS leader Heinrich Himmler addressed the Ukrainian SS recruits in a speech. “Your homeland has become more beautiful since you have lost – on our initiative, I must say – the residents who were so often a dirty blemish on Galicia’s good name – namely the Jews,” said Himmler. “I know that if I ordered you to liquidate the Poles, I would be giving you permission to do what you are eager to do anyway.”

Himmler’s speech was greeted with cheers from the Ukrainian recruits.