Of all the many mistakes I’ve made on my long, meandering journey to this moment, the most costly has been placing an excessive amount of trust in that old aphorism “Never attribute to malice that which can be adequately explained by stupidity.” 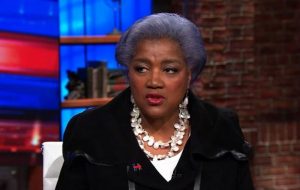 It was the “never” that got me. Sure, people make mistakes, and a lot of damaging events can be explained by ignorance and misunderstanding. It turns out, though, that malicious creatures do indeed walk among us, and the most adept manipulators, in my experience anyway, have learned how to manipulate our inclination to give them the benefit of the doubt. Democratic party henchwoman Donna Brazile is one such creature.

Twitter has largely been opting for mockery and ridicule in response to the above tweet [‘The Communists are now dictating the terms of the debate’, July 18, 2017], but I think that’s seriously in error. Brazile didn’t say this because she’s stupid. She is not stupid, and we need to stop looking at her that way. She is malicious.

Brazile attributed the comment to her being “old-school”, but that isn’t true either. Go and look at her Twitter page right now; this woman tweets about Russia nonstop. For the last year, Brazile has been right at the heart of America’s neocon-driven Russia hysteria, interfacing with Russia-related information on a daily basis. She’s even writing a book about Russia’s alleged hacking of Democratic emails.

Even if she had somehow managed to go all the way from the fall of the Soviet Union until last year without learning that Russia is not a communist country, there is simply no way she still believes that after having made Russia her bread and butter since July of last year. She’d have to be too dumb to know which end of the fork to eat with for that to be true, let alone help run one of the most powerful political parties on the planet.

When someone pointed out that Russia is not in fact communist, Brazile responded, “They no longer call themselves KGB either” and blocked him. The implication being, of course, that what we call Russia is actually still secretly the Soviet Union. The goal being, of course, to stoke the flames of vestigial Cold War xenophobia to advance her party’s neoconservative agenda of manufacturing support for escalations with a nuclear superpower. If you need people afraid of Russians, unite multiple generations in their irrational fear by using old red-baiting buzzwords to stir up old red-under-the-bed nightmares. This was Donna Brazile deliberately carrying out her role of helping to manipulate rank-and-file Democrats into the neoconservative fold.

We’ve been seeing more and more of this lately. Max Blumenthal released an important video last month documenting protesters showing up at anti-Trump rallies with hammer-and-sickle signs, implying that the government the president is accused-but-not-actually-accused of “colluding” with is communist, as in the USSR. The xenophobia is ramping up with the war machine, and Donna Brazile just tried to help kick it up a notch.

This is important to point out. We need to make a lot of noise when creeps like Brazile try to insert a mind virus this toxic into public consciousness, so that it will be met with skepticism and critical thinking rather than trust and acceptance. The way to inoculate people against propaganda’s influence is to shatter their trust in it.

To read more about the outrageously under-reported way the Democratic party has been co-opted by the neocons while the bright-eyed hopefuls were all talking about DemEntering and single-payer healthcare, check out Glenn Greenwald’s latest article for The Intercept  [‘With new policy group, Democrats in Washington continue to rehabilitate and unify with Bush-era neo-cons‘, July 17, 2017]

The omnicidal death cult that is neoconservatism is without a doubt the single most pressing threat to our species right now, and we all need to start calling out Donna Brazile and anyone else who facilitates that bloodthirsty ideology for the depraved warmongers that they are.

Note by New Cold War.org:
Donna Brazile was a two-time chair of the Democratic National Committee, from April 5, 2011 to May 4, 2011 and from July 28, 2016 to February 25, 2017. In 1988, she was fired from the presidential campaign of Democratic Party candidate Michael Dukakis for accusing Republican candidate George Bush of having an extramarital affair. In 2000, she managed the unsuccessful presidential campaign of Democrat Al Gore. In 2008, she told comedian Stephen Colbert, “Look, I’m a woman, so I like Hillary. I’m black; I like Obama. But I’m also grumpy, so I like John McCain.” During the 2016 presidential campaign, she was fired as an analyst from CNN for sharing information learned there with the Hillary Clinton campaign. Wikipedia.