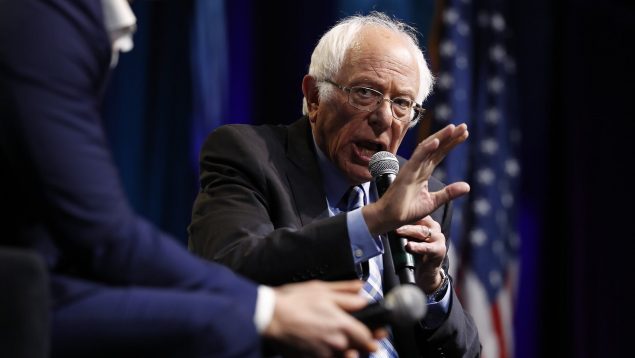 At J Street confab, 2020 candidate attacks Trump and Netanyahu credibility, saying ‘one is going to be impeached, the other one may end up in jail’

Democratic presidential hopeful Bernie Sanders said Monday that part of the $3.8 billion in annual US military assistance to Israel should instead go toward humanitarian relief in Gaza.

The Vermont senator, speaking at the annual J Street national conference, vowed to use American military aid as leverage to get Israel to roll back its settlement enterprise and enter peace negotiations with the Palestinians, an idea that has gained ground among some Democrats.

“I would use the leverage of $3.8 billion,” he told the confab, referring to the US-Israel memorandum of understanding brokered under the Obama administration. “It is a lot of money, and we cannot give it carte blanche to the Israeli government, or for that matter to any government at all. We have a right to demand respect for human rights and democracy.”

The 2020 candidate said he would condition US aid to Israel on Jerusalem taking tangible steps to reach a two-state solution and improve the conditions of Palestinians living in the battered coastal enclave.

“My solution is, to Israel, if you want military aid you’re going to have to fundamentally change your relationship to the people of Gaza,” he said. “I would say that some of the $3.8 billion should go right now to humanitarian aid in Gaza.”

“My proposal in terms of Israeli-Palestinian efforts is not a radical proposal,” he went on. “All it says is that we need an even-hand proposal for both people. What is going on in Gaza right now, for example, is absolutely inhumane. It is unacceptable. It is unsustainable.”

While some Democrats have proposed withholding some of the aid to push Israel into peace talks or away from West Bank annexation plans, Sanders appeared to be the first 2020 candidate to propose giving the money to Gaza instead.

He made the comments while being interviewed on stage by former Obama officials Ben Rhodes and Tommy Vietor, who now host the popular Pod Save the World podcast.

“You’re looking at leaders, one is going to be impeached, the other one may end up in jail, so I don’t know how much credibility they have, actually in terms of integrity,” Sanders said.

Sanders was one of five 2020 Democrats who attended the liberal Mideast advocacy group’s conference, where he said his approach to solving the intractable Israeli-Palestinian conflict would be to “demand” that Israel come to the table with the Palestinians to “negotiate an agreement that works for all parties.”

Buttigieg and Warren also supported using the assistance as a means to pressure Israel, although in more restrained terms.

Buttigieg said that if Israel followed through on Netanyahu’s pledge to annex the West Bank settlements, that would force him to re-evaluate the levels of aid the United States give to Israel.

Last week, Warren said cutting aid to pressure Israel was “on the table.”

Biden, Castro, Klobuchar and Bennet said leveraging the aid would be counterproductive.

Biden was perhaps the most emphatic in defending assistance to Israel.

“Israelis wake up every morning facing an existential threat,” he said in his video message. “That’s why we always have to be adamant that Israel must be able to defend itself.”

Sanders also highlighted his Jewish heritage and identity while lambasting the Netanyahu government as racist.

“I am very proud to be Jewish and look forward to being the first Jewish president,” he said. “I spent many months on a kibbutz in Israel. I believe absolutely not only in the right of Israel to exist but the right to exist in peace and security. That’s not a question,”

“But what I also believe,” he continued, “is the Palestinian people have a right to live in peace and security as well. It is not anti-Semitism to say that Netanyahu’s government has been racist.” 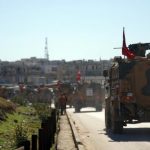 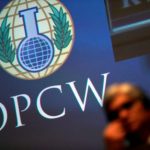