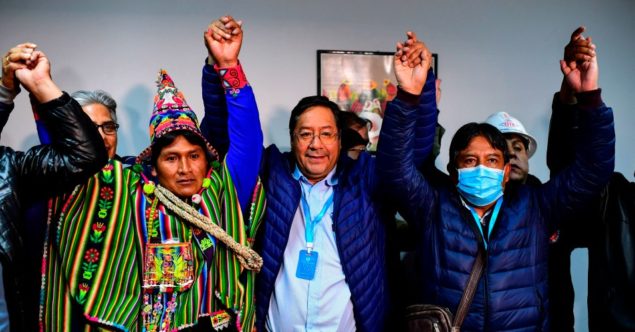 “Brothers and sisters: the will of the people has been asserted,” Morales declared from exile in Argentina.

“Democracy has won,” Arce, who served as Morales’ finance minister, said in an address to the nation after one exit poll showed him leading the race with 52.4% of the vote and former president Carlos Mesa in a distant second with 31.5%. Right-wing candidate Luis Camacho—an ally of unelected interim President Jeanine Añez—won just 14.1% of the vote, according to the survey.

The Washington Post reported that “if the exit poll numbers are confirmed by the official count, which was being tabulated slowly late Sunday, it would be more than enough to avoid a November runoff and claim outright victory.”

Arce characterized his apparently decisive victory, which even Añez was forced to acknowledge, as a mandate to continue the policies of the Morales government, which lifted millions of Bolivians out of poverty and expanded the nation’s economy.

“I think the Bolivian people want to retake the path we were on,” Arce said Monday.

Local residents have turned up at MAS HQ in La Paz, to celebrate the victory of the people against the coup. pic.twitter.com/8vzWljceJ5

Twice postponed due to the coronavirus pandemic, Sunday’s election was a do-over of last year’s presidential contest, which was thrown into chaos after the U.S.-dominated Organization of American States (OAS) leveled baseless allegations of “fraud” by Morales, who was eventually forced to resign and flee the country under threat by Bolivia’s military.

The coup against Morales sparked a wave of Indigenous-led protests that were violently repressed by the Bolivian military and police forces, which were granted sweeping immunity from prosecution by the anti-Indigenous Añez government.

“The OAS allegations were indeed the main political foundation of the coup that followed the October 20 election three weeks later,” Mark Weisbrot, co-director of the Center for Economic and Policy Research, wrote last month. “But they provided no evidence to support these allegations—because there wasn’t any. This has since been established repeatedly by a slew of expert statistical studies.”

From exile in Argentina, Morales on Monday celebrated Arce’s apparent victory as a “great triumph of the people.”

“Brothers and sisters: the will of the people has been asserted,” Morales tweeted. “This is an overwhelming victory… We are going to give dignity and liberty back to the people.”