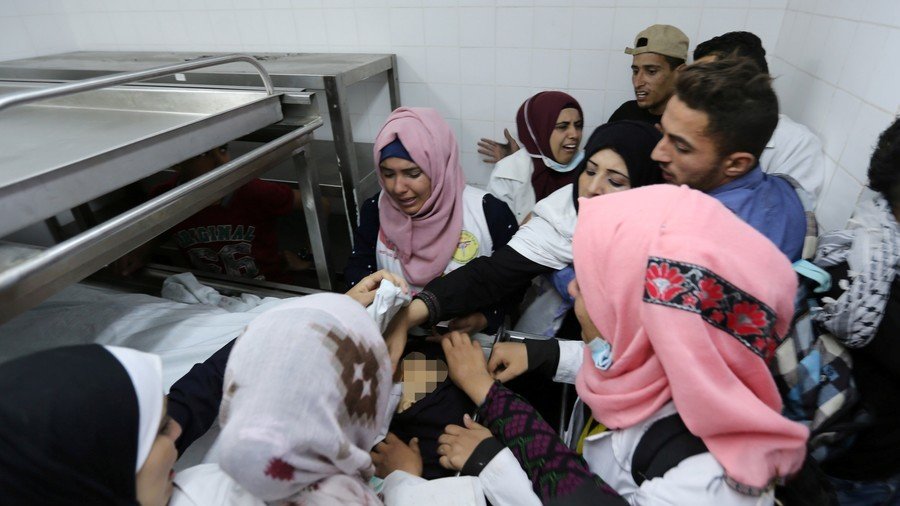 The murder of 21-year-old medical volunteer, Razan Al-Najar was a turning point in international perceptions of Israel’s actions in Gaza, violating all international treaties and conventions that protect medical staff in conflict zones. This article reprints official Palestinian reaction.

The killing of a 21-year-old female medical worker during the Great March of Return at the Gaza border is nothing short of a war crime, Palestinian officials said, calling on the international community to hold Israel responsible.

The murder of 21-year-old medical volunteer, Razan Al-Najar, is a direct violation of all “international treaties and conventions” that ensure the protection of the medical staff in the conflict zones, Palestinian Minister of Health, Jawad Awwad, said late Friday, noting that the shooting of the paramedic must have been “deliberate” and amounted to a “war crime.”

The volunteer was shot in the chest by the Israeli Defense Forces on Friday near the border fence east of Khan Younes, in the southern Gaza Strip, while she was helping wounded Palestinians.

An anonymous witness told Reuters that, at the time of the tragedy, the medical worker wore a white uniform, which clearly distinguished her from the rest of the Palestinian crowd taking part in the 10th weekly Great March of Return protests.

Furthermore, the medical volunteer “raised her hands high in a clear way, but Israeli soldiers fired and she was hit in the chest,” the witness told Reuters.

Commenting on the incident to RT, the Israeli military blamed Hamas “terror organization” for igniting violence at the border fence and endangering civilians. At the same time, it defended the actions of the troops, who “operated in accordance with standard operating procedures.” Cases in which civilians are “allegedly killed by IDF fire are thoroughly examined,” the military said in the statement to RT.

Najar became the latest victim of the Israeli crackdown on protesting Palestinians at the Gazan border. More than 100 protesters were injured by Israeli fire, including 40 by live bullets, directed at them by the IDF during the 10th Great March of Return rally. Another four paramedics were among those wounded while helping the injured.

The shooting of a medical worker is a “heinous crime committed by the occupation forces,” the Palestinian Minister of Justice, Ali Abu Diak, said in a statement, calling on the International Criminal Court to document Israeli brutality and to “try leaders, officials, officers, soldiers” and all those who committed “crimes against humanity.”

International humanitarian law affords special protection to medical personnel whose mission is to save lives in conflicts, under four Geneva Conventions of 1949. Article 24 was especially adopted to protect “medical personnel exclusively engaged in the search for, or the collection, transport or treatment of the wounded or sick.”

Fatah also condemned Washington’s move on Friday to veto an Arab-backed UN draft resolution which called calling for protective measures for the Palestinians. Qawasmi stressed that the “veto” used by the United States encourages the Jewish State to continue its crimes against the Palestinians.

Over 120 Palestinians have so far been killed since the beginning of the Great March of Return, mainly by live Israeli fire amid the raging protests at the Gaza-Israel border, which began on March 30. Thousands of others have been injured as Israel maintains its right to protect the border by all means necessary.