On November 27, The Real News Network (TRNN) broadcast an interview discussing the political legacy of Fidel Castro. The central leader of modern Cuba passed away on November 25.

The TRRN interview by host Paul Jay with guest James Early is especially timely due to the disrespect and foul calumny being heaped upon Fidel Castro’s legacy and upon the Cuban people themselves by mainstream media in the West. Canada’s public broadcaster, the CBC, for example, is routinely referring to Fidel Castro as a “dictator” and giving prominent coverage to the grisly cheering of Castro’s death by counter-revolutionary Cuban exiles in Miami.

In Canada, the political right and mainstream journalists are fiercely attacking Canadian Prime Minister Justin Trudeau for the respectful message of condolence that Trudeau sent to the Castro family and Cuban people. The text of Trudeau’s statement of condolence is below.

Among the many, many attacks against Trudeau for his statement is an essay by Terry Glavin in Maclean’s magazine (for many years weekly, soon to be downgraded to monthly). Glavin is a holdout supporter of the 2003 U.S. war against the Iraqi people.

In the United States, president-elect Donald Trump issued on Facebook a hateful tirade against Fidel Castro. That text is below.  Also below is the statement of U.S. President Barak Obama.

Introduction by Paul Jay, host of The Real News Network: 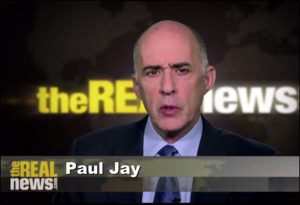 Fidel Castro died on November 25 at the age of 90. Castro was a leader and icon of the world revolutionary movement. His death has been an occasion to assess his legacy and of course there has been a matter of great debate. Corporate news, as always, focuses on the question of human rights abuse and political repression in Cuba under Castro’s leadership. But they refuse to look at two major questions when discussing the issue.

First, the choice for Cuba in 1959 was between a pro American mafia narco-state/narco-dictatorship, and revolution, national sovereignty, and socialism. That choice was made by the Cuban people, not one man. When we compare economic development and equality to other countries of the Caribbean and Central America, Cubans have faired well. Perhaps not such a bad choice they made. In Guatemala, five times more children will die before the age of five than in Cuba. Four times more Jamaicans will die before the age of 40 than in Cuba. Cuba’s health and education far surpasses countries of the Caribbean and Central America that are American client states.

Second, there’s no state in the world that does not repress it’s political opposition in one way or the other. That’s what states do. No state is worse than the United States. Domestically, there was the House of Un-American Activities Committee and McCarthyism, COINTELPRO [Wikipedia] and many other programs to repress domestic dissent. The U.S. has supported regimes throughout the world that have murdered millions of people to repress political opposition. It continues today with U.S. support for states like Saudi Arabia and Israel.

Does this mean the Cuban revolution did not have excesses that were not cases of political repression that were not justified? I expect there must have been. There is no revolution, no mass uprising, no state that does not go too far to defend the interests of the class forces it represents. The American Revolution is not judged by its abuses but for its historical achievements. The same goes for Cuba and Fidel Castro.

Now joining us to discuss the legacy of Fidel is James Early. He is a former cultural heritage policy director at the Smithsonian Institute and a member of the board of director of the Real News Network.

“It is with deep sorrow that I learned today of the death of Cuba’s longest serving President.

“Fidel Castro was a larger than life leader who served his people for almost half a century. A legendary revolutionary and orator, Mr. Castro made significant improvements to the education and healthcare of his island nation.

“While a controversial figure, both Mr. Castro’s supporters and detractors recognized his tremendous dedication and love for the Cuban people who had a deep and lasting affection for “el Comandante”.

“I know my father was very proud to call him a friend and I had the opportunity to meet Fidel when my father passed away. It was also a real honour to meet his three sons and his brother President Raúl Castro during my recent visit to Cuba.

“On behalf of all Canadians, Sophie and I offer our deepest condolences to the family, friends and many, many supporters of Mr. Castro. We join the people of Cuba today in mourning the loss of this remarkable leader.”

Today, the world marks the passing of a brutal dictator who oppressed his own people for nearly six decades. Fidel Castro’s legacy is one of firing squads, theft, unimaginable suffering, poverty and the denial of fundamental human rights.

While Cuba remains a totalitarian island, it is my hope that today marks a move away from the horrors endured for too long, and toward a future in which the wonderful Cuban people finally live in the freedom they so richly deserve.

Though the tragedies, deaths and pain caused by Fidel Castro cannot be erased, our administration will do all it can to ensure the Cuban people can finally begin their journey toward prosperity and liberty. I join the many Cuban Americans who supported me so greatly in the presidential campaign, including the Brigade 2506 Veterans Association that endorsed me, with the hope of one day soon seeing a free Cuba.

President Barak Obama statement on the passing of Fidel Castro

At this time of Fidel Castro’s passing, we extend a hand of friendship to the Cuban people. We know that this moment fills Cubans – in Cuba and in the United States – with powerful emotions, recalling the countless ways in which Fidel Castro altered the course of individual lives, families, and of the Cuban nation. History will record and judge the enormous impact of this singular figure on the people and world around him.

For nearly six decades, the relationship between the United States and Cuba was marked by discord and profound political disagreements. During my presidency, we have worked hard to put the past behind us, pursuing a future in which the relationship between our two countries is defined not by our differences but by the many things that we share as neighbors and friends – bonds of family, culture, commerce, and common humanity. This engagement includes the contributions of Cuban Americans, who have done so much for our country and who care deeply about their loved ones in Cuba.

Today, we offer condolences to Fidel Castro’s family, and our thoughts and prayers are with the Cuban people. In the days ahead, they will recall the past and also look to the future. As they do, the Cuban people must know that they have a friend and partner in the United States of America. [end]

Mark Entwistle is a Canadian businessman in Toronto. He was Canadian ambassador to Canada from 1993 to 1997 under Liberal Prime Minister Jean Chretien. Before that, from 1991-93, he was the spokesperson  for Conservative Prime Minister of Canada Brian Mulroney.

Several months ago, Fidel Castro Ruz himself publicly reminded Cuba that he would soon be 90 years old and would not last much longer. But it is still sobering to witness the passing of a historic figure. Fidel Castro dies aged 90 (Reuters)

A man of sometimes mercurial temperament, iron will and resolve, and unflagging confidence and belief in his own ability and historic destiny, it is hard to think of a modern world leader who had more direct personal impact on the direction of a country than Fidel Castro did in Cuba over seven decades.

He was 100 per cent Cuban, his beliefs formed and forged in the crucible of Cuban history, which he understood, interpreted and drew around himself as the protector of the heritage of José Martí, 19th century father of Cuban independence and philosopher-king of Cuban nationalism.

The coming week will be solemn in Cuba as Cubans on the Island mourn the passing of Fidel, many privately and emotionally, and almost all with a sense of respect for the historic role he played as symbol of the Cuban nation to the world. It is the Fidel who channeled Martí that they mourn or recognize rather than Fidel as socialist theoretician.

The dancing in the street in Miami by several thousand Cuban Americans is one sliver of the nuanced Cuban reality, but there are many millions of Cubans who live in Cuba itself who will not be dancing, not because they are afraid of the police, but because of a sense of loss and regard for the patriotic integrity of the Republic of Cuba.

The passing of Fidel Castro is personal for me. When I served as Ambassador of Canada to Cuba in the mid-1990s, I met with Fidel many times and spent probably 100 hours with him in conversation about almost everything but the proverbial kitchen sink. I am sure he would have had a view on kitchen sinks as well had that come up. My son, who was three years old at the time, would ask Fidel why he only wore the same olive green clothes and wondered why he didn’t have other clothes.

Canada’s special relationship with Cuba over 70 years of unbroken relations has provided Canadians with a unique front-row seat through a rolling panorama of Cuban history from the 1920s, 1930s and 1940s when Canadian banks financed the Cuban sugar industry through the upheaval of the Cuban Revolution and into the current period of aggressive evolution. Through this optic, the legacy of Fidel Castro comes in sharper focus.

The Cuba that Fidel Castro has left behind is very different than that of the late 1950s. It is a more independent, self-reliant and proud Cuba than in the period of former military dictator Fulgencio Batista, in which Cuba had been under the economic and political hegemony of the United States. Private American corporations had owned perhaps 80 per cent of fertile agricultural land and most of the utilities. These are simply facts. Fidel concluded that Cuba could never again allow such reliance on a single partner, and found it psychologically challenging to give up parts of the Cuban national economy to foreign director investors as much as this became increasingly necessary.

Large-scale investments in social infrastructure have created a society in which there is no illiteracy, which has 14 universities, and which still boasts some of the very best health indicators in the world despite severe budget pressures. Fidel Castro believed strongly that Cuba’s competitive advantage must lie in education.

At the same time, his laser focus on redirecting Cuba’s history caused him to push aside other Cubans who did not share his vision, causing hardship and emotional angst for many who left Cuba or stayed under suspicion. The fact of the hostile U.S. trade and investment embargo against Cuba certainly hardened his palpable sense of Cuba’s vulnerability to a clear and present danger from the neighbour 90 miles away across the Straits of Florida.

Cuban national identity has changed perhaps irreversibly as a result of Fidel Castro – Cubans like the taste of prouder independence and they now expect as a birthright of citizenship proper education and access to health care. Fidel Castro went further and to different places than José Martí could have imagined.