December update: 2020 – the year when Ukrainians became disappointed with their rulers 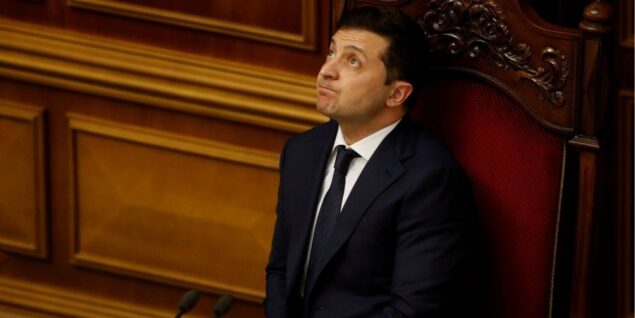 Dmitriy Kovalevich, New Cold War’s regular contributor and analyst, wraps up the year with this exclusive piece in which he assesses the impact the COVID-19 pandemic has had on Ukraine’s already vulnerable economy and health services and how this has affected the population.

It’s December, the last month of the year, so it is time to review what has been for most of the planet, an annus horribilis. In 2020, like the rest of the world, Ukraine has faced a serious challenge – the pandemic – which has negatively affected the country’s already weak economy.

In Ukraine, this challenge was aggravated by the fact that the pandemic manifested as the country embarked on neoliberal healthcare reforms, carried out under US control. In April, when the coronavirus reached Ukraine, the second stage of healthcare reform was being launched in the country, which involved the closure of hospitals and healthcare spending cuts.

One of the consequences of these reforms has been a serious shortage of medics; many preferring to leave the country and work abroad. The main reason for this are the extremely low salaries, set against a background of a serious risk of infection. Nevertheless, even in the budget for the coming year, which was approved in December, healthcare spending does not imply an increase in salaries, since the lion’s share of public funding must be used to repay IMF loans.

Although the initial draft budget envisioned salary increases, this was met with sharp criticism from Western bankers, whom Kiev does not dare to disobey. For comparison, on one of Ukraine’s free advertisement websites, the country’s Ministry of Health is looking for an anaesthesiologist in a provincial hospital at a salary of $180 per month [1]. Meanwhile, an adjacent advert for a security guard, in a supermarket in the same city, is offering a salary of $350.

In the midst of the pandemic, the main issue for the Ukrainian authorities was to prevent affordable Russian vaccines for Ukrainians. The Kiev authorities say they will only accept Western vaccines, but since Ukraine is a poor country, only about 5% of the population will have access to these vaccinations and only starting from March 2021 [2].

Ukraine ranks among the poorest countries in the world in terms of vaccine availability, along with Tajikistan, Yemen, Uganda and Zimbabwe. By comparison, Russia has already reserved sufficient vaccine for 50% of its population and Turkey for 30%. And the rich countries of the West and the European Union are already contracting the number of doses exceeding the population (considering the probability of revaccination). The absolute leader here is Canada, which has provided itself with the amount of vaccine that can be used to vaccinate its entire population four times over.

Unsuccessful measures to combat coronavirus have become one of the reasons for the decline in the popularity of the current Kiev government. The policy of the Kiev authorities in this regard could be described as “a simulation” of activity, as well as in the fight against corruption or the establishment of peace in Donbass. Quarantine measures are periodically introduced before being cancelled. The Ukrainian Ministry of Health issues conflicting instructions. The reason for all this commotion is not the pandemic itself, but the indecision of the authorities, which manoeuvre their way among nationalists, Ukrainian oligarchs and Western creditors, not daring to issue any clear instructions or pursue a consistent policy.

Main disappointment of the year

According to a December survey by the Razumkov Center, the main disappointment of the outgoing year for Ukrainians was the President, Volodymyr Zelensky [3]. People had really pinned hopes on him for ending the war in Donbass and improving their lives. It is worth recalling that his election last year was primarily as a result of a popular TV series ‘Servant of the People’, where his character confronts the IMF and Western bankers. As the real president, he turned out to be a mere “servant of the IMF”. A total of 42.1% of respondents are said to be disappointed with Zelensky’s activities. In this regard, the President is significantly ahead of his predecessor Petro Poroshenko, (only 10.4% of Ukrainians were disappointed with him).

The poll also shows that this year has seen the number of Ukrainians who believe that the country is moving in the wrong direction increase significantly. Now, 66.8% think this is the case, against 35.8% in December last year. Of course, the number of those who are confident that the country is on the right course has decreased:16.5% now think so, against 44.2% last December. The overwhelming majority (71%) said that during 2020 the situation in the country as a whole has deteriorated, with only 3% believing that it has improved, and 20% believing that it has stayed the same. Most often, people point to a worsening situation in areas such as the level of prices and tariffs (81%), the economic situation of the country (76%), the level of stability (74%), and healthcare (72%).

Another poll, conducted in mid-December by the Kiev International Institute for Sociology, showed that President Zelenskiy topped the list of politicians who are considered to be the year’s losers [4] with Ex-President Petro Poroshenko ranking second.

Lack of trust on all issues

Andriy Ermolaev, the Ukrainian sociologist and political scientist, also recently noted that the overwhelming majority of Ukrainians categorically distrust all politicians and these misgivings do not only apply to political matters. “68% of Ukrainians would not trust any of the top Ukrainian politicians on the issue of raising their children; 70% would not trust any of them on the issue of letting them to enter their home and 73% would not trust them to manage their money.” And, as Ermolaev adds, “in addition to all this, only 18% rely on their own opinion about politics, while the majority (about 70%) are looking for answers on mainstream TV channels, in social networks. Our people are amazing! Simply ‘dormant angels’! Children, housing and money – we do not trust politicians, but how to live and what to do with all this – we will find out on TV and FB.” [5]

For many experts and politicians, this is indeed a deep contradiction, but it should be borne in mind that the overwhelming majority of Ukrainians live completely outside any kind of state at all. We have a large category of people who are often referred as ‘stateless’, who perceive the state (Republic of Ukraine) just as a TV-show, something which has nothing to do with their lives.

Recent local elections showed that two-thirds of Ukrainians do not vote and do not participate in elections at all. “Politics is in Kiev,” they say in the Ukrainian provinces. The neoliberal reforms carried out in Ukraine with the help of the United States and the European Union, as well as the policy of nationalism imposed by the state, escalate the formation of closed quasi-states inside Ukrainian society – large groups that are only formally connected with the central government and state as a whole.

Neoliberal reforms impact on all areas

Neoliberal healthcare reform has led to the closure of public hospitals, even though for most Ukrainians private hospitals are not affordable. As a result, semi-legal hospitals are appearing, where un-waged doctors work. Millions of Ukrainians have been working in production for decades, but they have never paid taxes anywhere. Many of these food and car parts businesses are technically absent. Entire factories may operate while being formally absent. Public transport companies often does not have any licenses and its owners do not pay taxes. Since radical nationalism was imposed in the education system, alternative schools began to appear, which are also not registered anywhere.

Trade with Russia is prohibited, but nevertheless it remains Ukraine’s main trading partner (mainly due to smuggling). In Ukraine, Russian media and social networks are banned, but every year the polls show that they are the most popular among Ukrainians. In the provinces, a typical Ukrainian, if he/she is not a civil servant working in administration, may live his or her entire life without being consciously aware of, or interacting with, the state (some even live for decades with a Soviet passport).

Most likely, he/she pays some taxes, but not to the official authorities or tax office, but to mafia structures. The central government is believed to be a specific group of people in Kiev that exists on financial assistance from the United States and pretends to control the country. The US elections and Biden’s victory this year have sharply raised the expectations of the central government in Ukraine, especially hopes for increased funding.

In fact, a long-term economic model of the state functioning has formed in Ukraine in recent years: “We threaten the United States [by saying] that we can shift to Russia, and demand more financial aid with each year”. Still, it works. The policy pursued by the United States in Ukraine, the purpose of which is to encourage Ukrainians to be anti-Russian, in fact leads to the disintegration and atomization of the society. Instead of the traditional confrontation between the east and west of the country, we see another tendency: disintegration into many small regions controlled by local “feudal lords”. And this trend intensified significantly in 2020, also due to the pandemic.