Not until faithfulness turns to betrayal
And betrayal into trust
Can any human being become part of the truth.
—Rumi 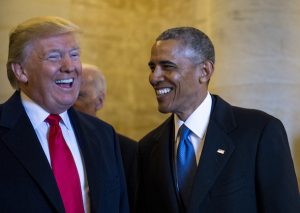 U.S. President Donald J. Trump and Former U.S. President Barack Obama wait to exit the east front steps for the departure ceremony during the 58th Presidential Inauguration in Washington, D.C., Jan. 20, 2017. More than 5,000 military members from across all branches of the armed forces of the United States, including reserve and National Guard components, provided ceremonial support and Defense Support of Civil Authorities during the inaugural period. (DoD photo by U.S. Air Force Staff Sgt. Marianique Santos)

Donald Trump won the 2016 nomination and general election largely because he was able to pose as a populist and anti-interventionist “America Firster.” Barack Obama won the 2008 election in good part because he promised “hope and change” and because he gave a speech years earlier against the then-impending invasion of Iraq.

Short of disclosure of diaries or other documents from these politicians, we won’t know for certain if Obama and Trump planned on reversing much of what they promised or if the political establishment compelled them to change. Either way, they both perpetrated massive political fraud. And what is perhaps most striking is how quickly each of them backtracked on their winning core campaign messages, particularly since they were both proclaimed as representing “movements” meant to shake up the system.

Even before he took office, Obama stacked his administration with pro-war people. He kept George W. Bush’s head of the Pentagon, Robert Gates; nominated Hillary Clinton for secretary of state, whom he beat largely because she voted for giving Bush authorization to invade Iraq. Obama also surrounded himself with prominent Iraq War backers atop the administration, including vice president Joe Biden and senior foreign policy advisers Susan Rice and Richard Holbrooke. Even before he was sworn in, Obama had supported the 2008 Israeli slaughter of Palestinians in Gaza. See “Anti-War Candidate, Pro-War Cabinet?” from 2008.

Obama had talked about a nuclear-weapons-free world—a key reason he won the 2009 Nobel Peace Prize—but he later geared up to spend $1 trillion in upgrading the U.S. nuclear weapons arsenal. At the end of his administration, attempts at the United Nations to work toward banning nuclear weapons were sabotaged, efforts that the Trump administration continues.

Obama also continued the uncertainty about whether Israel possessed nuclear weapons. Asked by columnist Helen Thomas at his first presidential news conference if he knew of any country in the Mideast that had nuclear weapons, Obama claimed he didn’t want to “speculate,” rather than answering “Israel” and starting the process of clearing away the mountain of deceits that sit atop U.S. foreign policy.

Trump’s election also brought some hope that he would live up to his populist promises and at least pursue U.S. policies that reflected his “America First” ideas and minimize U.S. military adventures abroad. Instead there have been a series of key reversals, topped off by Trump’s April 6 launching of 59 cruise missiles against the Syrian government. But that military intervention, reversing his plans to focus on defeating ISIS and not orchestrating “regime change,” was not alone. The unraveling of campaign deceits is part of a whole host of Trump “flip-flops” on the Export-Import Bank, NATO, China, Russia and the Federal Reserve.

Fundamentally, Obama and Trump ran against the political establishment and then helped rebrand it—further entrenching it.

And, of course, it’s not just foreign policy. Obama supported the Wall Street bailout and brought in pro-Wall Street apparatchiks Tim Geithner and others around Robert Rubin, like Larry Summers. Some were connected to Goldman Sachs, including Rahm Emanuel, Gary Gensler and Elena Kagan.

Trump campaigned as a populist, but he also brought in a litany of Goldman Sachs tools, most prominently Steven Mnuchin as treasury secretary and Gary Cohn as chief economic adviser. The Trump administration even appears to be targeting Social Security.

While the Obama/Trump deceptions have much in common, their styles are different. Obama is lawyerly and, like jello, hard to pin to the wall. Many of his broken promises are violations of the spirit of what he said, not the letter. For instance, he promised to withdraw “all combat troops” from Iraq, but didn’t tell voters that “combat troops” in his parlance is not the same as “troops.” Since many of his backers were infatuated with him, they seemed incapable of parsing out his deceitful misimpressions.

By contrast, Trump behaves more like an electron. He can say X and not-X in the span of a minute. Like an electron, he can be in two places at the same time. Trump is just an extreme example of what should be evident: It’s largely meaningless if a politician declares a position, especially during a campaign. The question is: What have they done? How have they demonstrated their commitment to, say, ending perpetual wars or taking on Wall Street?

Obama and Trump are both salesmen, with different pitches and personas. These patterns are not new. George W. Bush campaigned against “nation building” before invading Iraq. Bill Clinton campaigned as the “man from Hope” who felt the pain of the little guy and then enriched himself. George H. W. Bush claimed he was a compassionate conservative but didn’t show any compassion. All backed corporate power and finance. All waged aggressive war.

Would Obama and Trump have acted differently if their “opposition” parties had not subjected them to ridiculous critiques that pushed them to be more militaristic? Republicans portrayed Obama as a “secret Muslim” and “pacifist,” which added to his incentive to bomb more Muslim countries and show he wasn’t. Trump experienced the “liberal” and “progressive” critique that he was Vladimir Putin’s “puppet” because he talked about cooperating with Russia, rather than confronting it. That pushed Trump to be more militaristic against the other major nuclear state on the planet.

To avoid repeats of these political scams, America needs a citizenry, aided by media, that adroitly and accessibly pierces through the layers of deception in real time. Another thing that’s needed is that people from what we call the “left” and “right” need to join together and pursue policies that undermine the grip of Wall Street and the warmakers. A wiser electorate must resist the temptation of loving or hating personalities, and avoid the the unproductive business of taking partisan shots. Only when there’s adherence to real values—and when solidarity is acted upon—will the cycles of betrayal be broken.

Sam Husseini is communications director for the Institute for Public Accuracy, a consortium of policy analysts and founder of VotePact.org, which encourages cooperation between principled progressives and conscientious conservatives. This commentary also appeared on Consortium News. 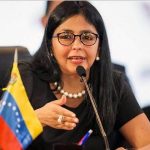 Venezuelan foreign minister slams ‘interventionist’ statement from Latin American gov’tsMultipolarity
Beware the dogs of war: Is the American Empire on the verge of collapse?Multipolarity