TeleSur, May 13, 2017  (with more analysis of the situation in Venezuela further below)

[Venezuela is confronting a barrage of Western media disinformation and agitation calling for the overthrow of President Nicolas Maduro.] 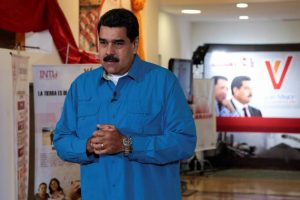 Venezuelan President Nicolas Maduro speaks during his weekly ‘Sundays With Maduro’ broadcast on May 1, 2017

Maduro’s confirmation debunks claims made the opposition that his call for a constituent assembly signals the country’s transition into a “dictatorship.” The decision is in accordance with article 347 of the Bolivarian Constitution, which allows for the convening of a national constituent assembly with the purpose of “transforming the state.”

The process is intended to facilitate a dialogue with the opposition and broad sectors of society with the goal of easing the ongoing political tensions.

A part of the opposition has rejected the call, which would lead to a new constitution, saying it’s a way to avoid elections. Seventeen political parties, however, have accepted the proposal.

Maduro said that “sooner rather than later” his government will defeat the “violent guarimbas,” referring to the violent opposition protests in the country.

Elections for governors were scheduled for December but were postponed by the National Electoral Council due to ongoing violence in Venezuela. This year, there will be elections for mayors. The presidential election will be held at the end of 2018.

Maduro also accused the opposition of being responsible for the death of 27-year-old Miguel Castillo on May 10 in Caracas during a demonstration, after allegedly being hit by a homemade weapon.

Maduro referenced the opposition’s allegations that Castillo had been killed by a member of the police, saying he had banned the use of firearms in demonstrations. “I have banned the use of any firearm, including the arms allowed by law to use plastic pellets, I have prohibited it and law enforcement members are acting with discipline and morality to defend peace in the country, with gas and shields allowed by national and international laws,” Maduro said.

Venezuelan fashion designer Carolina Herrera recently criticized the death of her 34-year-old nephew, Reinaldo Herrera, who was found dead next to a friend in Caracas after being kidnapped, according to the Public Prosecutor’s Office. 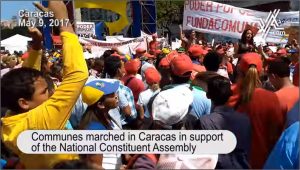 Thousands march in Caracas, Venezuela for a ‘truly communal state’

Thousands of Venezuelans took to the streets of Caracas this week to rally in support of the country’s commune movement. Socialist revolutionaries from across the country joined the march, calling on the government of President Nicolas Maduro to endorse a proposal to provide constitutional recognition of communes.

Currently, the commune movement has broad legal recognition, but isn’t included in the country’s constitution. However, commune supporters are optimistic that could soon change, with Maduro recently calling for constitutional reform…

An open letter to the Executive Committee of the Latin America Studies Association on the situation in Venezuela, published in Venezuela Analysis, May 12, 2017 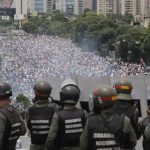 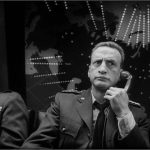