Debt disaster with no escape 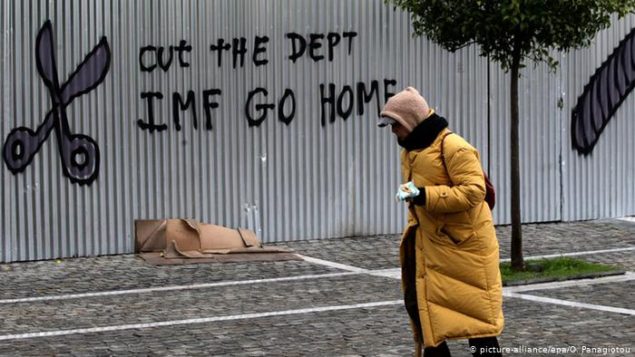 The IMF-World Bank semi-annual meeting starts this week.  Earlier the IMF kicked off the show with a warning that the poor countries of the world are heading for a catastrophe from the pandemic slump, leading to defaults on the debts that their governments and companies owe to investors and banks in the ‘global north’.

The IMF-World Bank semi-annual meeting starts this week.  Earlier the IMF kicked off the show with a warning that the poor countries of the world are heading for a catastrophe from the pandemic slump, leading to defaults on the debts that their governments and companies owe to investors and banks in the ‘global north’.

According to the IMF, about half of Low Income Economies (LIEs) are now in danger of debt default.  ‘Emerging market’ debt to GDP has increased from 40% to 60% in this crisis. 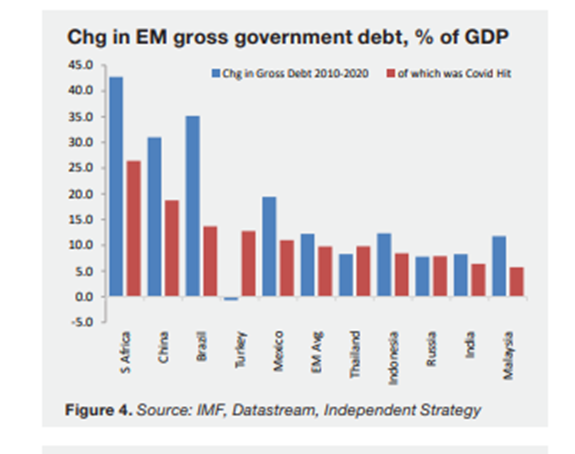 For example, Brazil is now running a consolidated government deficit of 15% of GDP.  India’s is 13%.  Both countries will see their sovereign debt levels rise towards 90% of GDP by the end of next year and approach 100% of GDP in 2022.

New World Bank chief economist Carmen Reinhart warned that the global south faces “an unprecedented wave of debt crises and restructurings”.  Reinhart said: “in terms of the coverage, of which countries will be engulfed, we are at levels not seen even in the 1930s.”  Debts owed by non-financial companies in the 30 largest emerging markets rose to 96 per cent of gross domestic product in the first quarter of this year, more than the amount of corporate debt in advanced economies, at 94 per cent of GDP, according to the IIF.

Over the next two years the top 30 emerging economies face the highest level ever of maturing debt, both private and public. 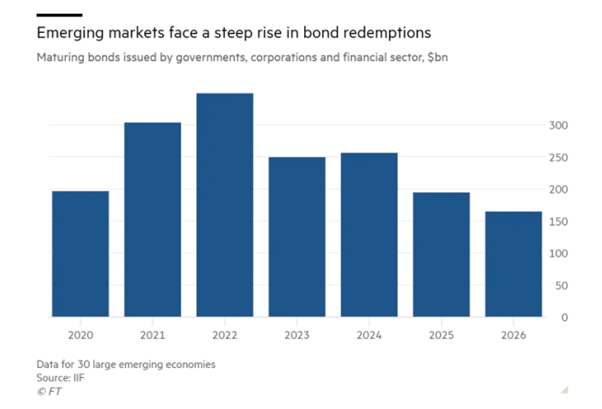 And so these poor countries will be forced to raise even more debt to deal with the pandemic slump and meet repayments on existing debt.  Nevertheless, Reinhart argued that “while the disease is raging, what else are you going to do? First you worry about fighting the war, then you figure out how to pay for it.”

This was ironic coming from somebody who is best known for her work with fellow Harvard economist Kenneth Rogoff on the economic damage inflicted by high debt levels throughout history.  In their famous (infamous?) book, This time is different, they argued that high public debt levels were unsustainable and governments would have to apply ‘fiscal austerity’ to reduce them or face a banking and debt collapse.

Worse, much of the debt is denominated in US dollars and as that hegemonic currency increased in value as a ‘safe haven’, the burden of repayment will mount for the dominated economies of the ‘south’. The level of EM corporate ‘hard currency’ debt is significantly higher now than in 2008. According to the IMF’s October 2019 Financial Stability Report, the median external debt of emerging market and middle-income countries increased from 100 per cent of GDP in 2008 to 160 per cent of GDP in 2019.

Capitalist investors and banks are now no longer investing in the stocks and bonds of the ‘global south’ – apart from China.  So the flow of private capital has dried up to fund existing debt.

As a result, the currencies of the major emerging markets have dived relative to the dollar and other ‘hard’ currencies, making it even more difficult to repay debts. 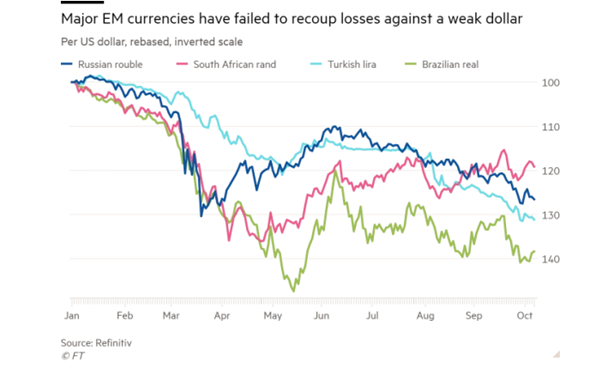 This impending debt crisis only compounds the impact of the pandemic slump on the global south.  In its report for the semi-annual meeting, the World Bank reckons that the pandemic will push between 88m and 115m people into extreme poverty this year, which the bank defines as living on less than $1.90 a day (a pathetically low threshold anyway).

More than 80 per cent of those who will fall into extreme poverty this year are in ‘middle-income’ countries, with south Asia the worst-hit region, followed by sub-Saharan Africa. “We are likely to see people who previously escaped poverty falling back into it, as well as people who have never been poor falling into poverty for the first time,” said Carolina Sánchez-Páramo, director of the bank’s poverty and equity division. “Even under the optimistic assumption that, after 2021, growth returns to its historical rates . . . the pandemic’s impoverishing effects will be vast,” the World Bank said.

The global economy is expected to contract by between 5 and 8 per cent this year on a per-capita basis, and that would set poverty levels back to their 2017 levels, undoing three years of progress in improving living standards, the World Bank estimated. 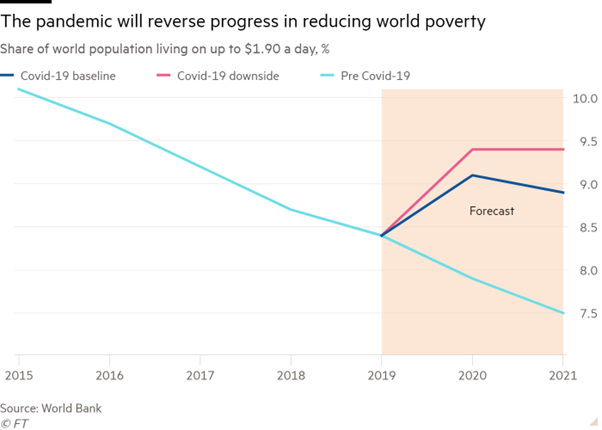 Progress in reducing poverty had been slowing before the pandemic, according to the report. About 52m people worldwide rose out of poverty between 2015 and 2017 but the rate of poverty reduction had slowed to less than half a percentage point a year during that period, after reductions of about 1 per cent a year between 1990 and 2015.

What is also clear from the report is that all the reduction in poverty rates since 1990 have been in Asia, in particular East Asia, and in particular China. Strip China out and there has been little or no improvement in absolute poverty in 30 years. 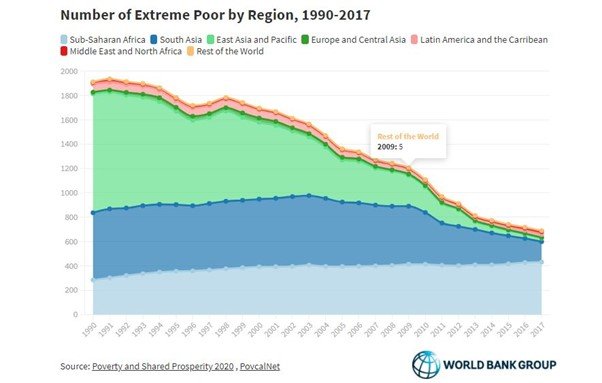 Nearly 7 per cent of the world’s population will live on less than $1.90 a day by 2030, the report said, compared with a target of less than 3 per cent under the UN’s Sustainable Development Goals.

In an attempt to head off the impending debt defaults, a debt service moratorium was approved by the G20 and runs until the end of this year. The IMF has also provided about $31bn of emergency financing to 76 countries, including 47 of the poorest countries under the Catastrophe Containment and Relief Trust. Most of these countries had high economic dependence on single commodity exports or tourism and suffered a classic external financing seizure and economic collapse when Covid-19 struck.

But mostly it’s all talk; with speeches like those of IMF chief Georgieva and Reinhart at the World bank.  As Oxfam says in a devastating new report on inequality and the lack of public services and workers’ rights, “emergency programmes have focused on closing the huge budget and balance of payments financing gaps produced by coronavirus-related revenue collapses, and on allowing more space for health and limited social protection spending to confront the crisis.” And the “IMF’s global, regional and national reports are already warning of the need for ‘fiscal consolidation’ i.e. austerity, to reduce debt burdens once the pandemic has been contained.”

Virtually all the national emergency loan documents emphasize the need for governments to make anti-corona virus spending temporary and to take fiscal adjustment measures to reduce deficits after the pandemic. For example, in June 2020, the IMF agreed a 12-month, $5.2bn loan programme with Egypt, which detailed a FY2020/21 primary budget surplus target of 0.5% to allow for spending related to the coronavirus pandemic, but demanded that it be restored to the pre-crisis primary surplus of 2% in FY 2021/22. The IMF has also been linked to large cuts in health spending, which have left countries ill-prepared for the crisis.

The World Bank has pledged $160bn in emergency funding over the next 15 months, and has advocated debt relief by other creditors, but has so far refused to cancel any debt owed to it, despite low-income countries repaying $3.5bn to the World Bank in 2020. Oxfam’s analysis shows that only 8 of 71 World Bank COVID-19 health projects included any measures to reduce financial barriers to accessing health services, even though a number of these projects acknowledge high out-of-pocket health expenditure as a major issue. Such expenditures bankrupt millions of people each year and exclude them from treatment.

The only effective way to avoid debt defaults is to cancel the debts of the poor countries owed to the banks and multinationals.  But that is the one policy that is no going to happen.

The Jubilee Debt Campaign (JDC) called for the IMF to sell some of its stockpile of gold to cover the debt payments owed by the world’s poorest countries for the next 15 months.  The JDC said selling less than 7% of the IMF’s gold would generate a $12bn profit, which is enough to cancel the debts owed by the 73 poorest countries until the end of 2021 and still leave the Washington-based organisation with $26bn more gold than it held at the start of the year.  The JDC and others have also called for a new issuance of Special Drawing Rights (SDR), in effect international money, to fund the poor countries.  Both these suggestions have been rejected.

Reinhart wails that “At the country level, at the multilateral level, at the G7 level, who has the financing to fill in all the big fiscal gaps that have been created or exacerbated by the pandemic?”  Answer there is none.