Debate over why the rise of food production in Russia

As Russia’s retaliatory ban on select Western food imports nears its one-year mark, the Kremlin is trumpeting the embargo as a major opportunity for growth in Russian agriculture. 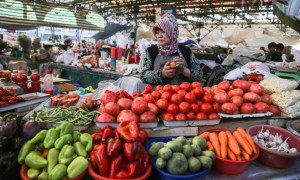 But industry analysts say that, despite promising signs on the market, the ban hasn’t and won’t boost domestic production as the Kremlin says it will. Instead, it is the fallout from Russia’s current economic crisis — in particular, a steep drop in the value of the ruble — that is giving Russian farmers a temporary edge.

Russia introduced the food bans last August in response to EU and U.S. economic sanctions on Moscow, imposed after an airliner was shot down over territory held by Russia-backed rebels in east Ukraine last July. In the months following, Russian food production began to rise, and officials jumped to explain the increase as a direct result of the ban. “Today agriculture is developing comparatively dynamically … thanks to help from the government and the restrictions on imports,” Prime Minister Dmitry Medvedev said late last week when announcing a one-year extension to the ban, according to a transcript on the government website.

Agricultural producers, too, have looked hopefully to the ban for a chance to increase their market share. Ahead of the embargo’s extension, they lobbied for extra categories to be included, from wine to ice cream.

But it is actually the devaluation of the ruble, according to official data and agriculture experts, that has most boosted domestic production and hit imports as Russians turn toward the cheapest goods available.

“The devaluation of the ruble has had the biggest effect,” said Natalya Shagaida, director of the Center for Agrofood Policy at the Russian Presidential Academy of National Economy and Public Administration (RANEPA). “The embargo is not the main measure of support for agriculture,” she said.

Since the ban went into effect last August, Russia has seen a dramatic rise in production in some of the categories in which Western imports were banned. As many other sectors stagnate or shrink amid an economic contraction expected to reach around 3 percent this year, Russia’s agricultural production rose by 3.5 percent in the first quarter year-on-year, according to data compiled by RANEPA.

The Russian government has pointed to the rise in domestic production and fall in imports as proof that the embargo is helping to boost the fortunes of Russians farmers. However, it is rising poverty, not the embargo, that is behind the bulk of the growth in domestic output.

The embargo did have some effect — in October last year, a few months after the embargo came into effect, food imports were down 15 percent compared to 2013, according to data compiled by RANEPA. But while October’s drop was steep, imports in the first quarter of this year were far lower, down a massive 43 percent year-on-year.

The difference between the two is the ruble, according to RANEPA’s Shagaida. “Imported products have become too expensive and so [imports] are less attractive to the Russian consumer,” Shagaida said.

In October of last year the ruble was still fairly strong against foreign currencies, having fallen 17 percent to the U.S. dollar and 9 percent to the euro since the start of 2014. Consumers still had a degree of choice between imported goods and domestic produce, with the option to buy higher-quality Brazilian beef instead of homegrown meat if they preferred.

Food sales tracked the ruble’s fall, dropping 17 percent year-on-year in the first quarter, according to data from RANEPA. While March saw a slight rise in food sales, Shagaida noted in a report published in May that people now favored cheap, high-calorie goods, with bread sales (up 17 percent), cereal sales (up 12 percent) and pasta sales (up 10 percent) leading the pack.

Back to the USSR

Nevertheless, some farmers have seen their fortunes improve thanks to the ban, which has allowed them to expand market share in the short term and forced domestic grocery chains to give their products more prominent placing in stores.

Russian meat producers, which had idle production capacity following a number of investment projects, leapt into the breach when the embargo ripped through the largely foreign-dominated industry, according to Timur Nigmatullin of research agency Finam.

Meat producer Cherkizovo, one of Russia’s only publicly traded agricultural companies, saw poultry sales rocket up 22 percent in 2014 year-on-year, the company said on its website in January.

And as Russian firms ate up market share, grocery stores cut or removed slotting fees for domestic producers, RANEPA’s Shagaida said. Slotting fees are the fees that producers pay grocery chains in order to sell their products in stores, with fees ranging in size according to how prominently a good is placed.

“Businesses … began to pay more attention to Russian products and producers of these products. This is a tremendous plus,” Shagaida said.

But when the ban is eventually lifted, Russia’s farmers may be in worse shape than when they started.

“The less competition there is, the worse the quality, as it was in the Soviet Union,” Finam’s Nigmatullin said. Without EU produce to compete with, Russian firms have little incentive to raise their quality or to market their products aggressively.

Crisis forces more Russians to shop only for necessities, June 30, 2015