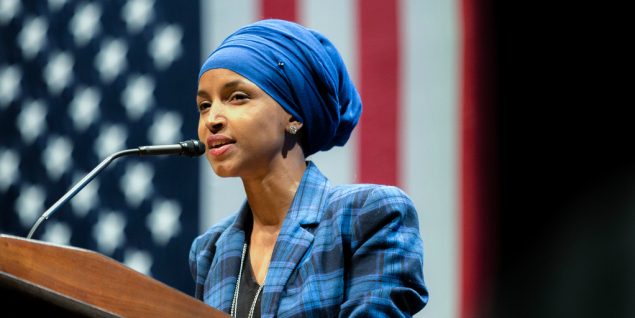 “Ilhan Omar’s critics did her a favor: They proved the very point she made at the Progressive Issues Town Hall at Busboys and Poets bookstore in Washington, DC, last week.” 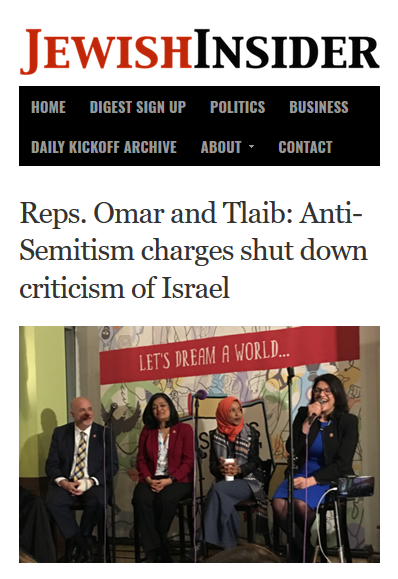 As originally reported (Jewish Insider, 2/28/19), Ilhan Omar’s remarks were about how charges of antisemitism shut down criticism on Israel/Palestine.

Though it was not their intention, Ilhan Omar’s critics did her a favor: They proved the very point she made at the Progressive Issues Town Hall at Busboys and Poets bookstore in Washington, DC, last week.

Referring to herself and fellow Democratic Rep. Rashid Tlaib, who was also on the panel, Omar said:

It’s almost as if, every single time we say something, regardless of what it is we say, that is supposed to be about foreign policy or engagement or advocacy about ending oppression or the freeing of every human life and wanting dignity, we get to be labeled something, and that ends the discussion. Because we end up defending that, and nobody ever gets to have the broader debate of what is happening with Palestine.

Of course, you wouldn’t know what she said or what point she was making, because the media and the politicians attacking her ignored those remarks and focused almost exclusively on a single sentence she added: “So I want to talk about the political influence in this country that says it is okay for people to push for allegiance to a foreign country.”

Jonathan Chait’s article in New York magazine (2/28/19), which launched the days of outrage that followed, reported only on  this “allegiance” sentence with the headline “Ilhan Omar Accuses Israel Hawks of ‘Allegiance to a Foreign Country.’” Yet the article Chait linked to as his source, a rather neutral report on the event in the Jewish Insider (2/28/19), under the headline “Reps. Omar and Tlaib: Antisemitism Charges Shut Down Criticism of Israel,” contained the earlier sentences and a context for Omar’s remarks, which Chait chose to ignore.

It also included the moderator’s question to which Omar was responding, asking what

But Chait omitted that in his hit piece. 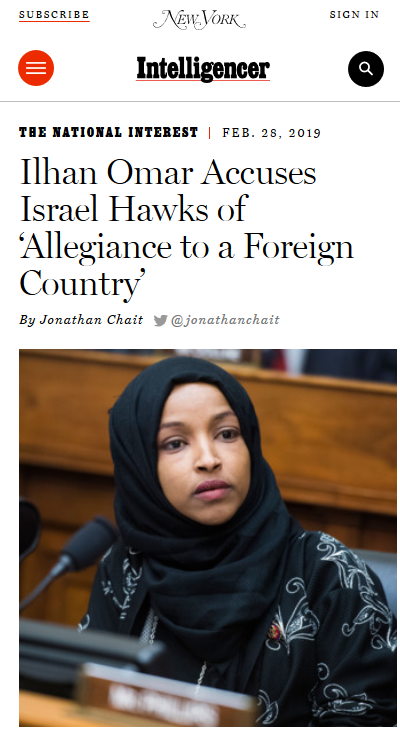 Omar didn’t accuse “Israel hawks” of having “allegiance to a foreign country” (New York, 2/28/19); she said that allegiance was being demanded, implicitly of lawmakers like herself.

To Chait, the sentence on its own was clearly antisemitic, repeating the old and sinister “myth of dual loyalty in which the Americanness of Jews is inherently suspect.” The doubting of the Americanness of Jews as well as Catholics, because of their supposedly overwhelming loyalty to Israel and the Vatican, is a myth that has been retired for decades. Most of the friends (Jewish and non-Jewish) I asked about the antisemitic trope had no knowledge of it, and  it’s unlikely that Omar, who at 37 is about the same age as my friends, had any either.

Chait didn’t overtly call Omar an antisemite. But he accused her of

using that cause [of Palestinian rights] to smuggle in ugly stereotypes. And whatever presumption of good faith she deserved last time should be gone now.

Chait has a clear double standard for cultural sensitivity and respect: He requires a young Muslim woman to be conversant in and circumspect of even antiquated stereotypes about Jews, while his own remark makes use of the much more current stereotype of the sneaky, shady Arab or Muslim who is not to be trusted.

Toward the end of his article, Chait said, “There should be more space in American politics to advocate criticism of Israel and support for Palestinian rights.” But it’s hard to extend to him the “presumption of good faith” when his article provided no space for Omar’s words about the imbalance in US politics regarding Israel and Palestine.

Omar wasn’t talking about Jewish allegiance anyway, but the demand for unquestioning support of Israel in US politics and the ban on discussions of humanitarian and human rights matters when it comes to Palestine.  The largest group of Zionists in America are Christian Zionists who support Israel at all costs, lest they have no place for the Rapture, when Jews will have the choice of conversion or eternal damnation.  But nobody calls Mike Huckabee an antisemite.

Once Chait circulated this sentence and declared what it meant, politicians, with House Speaker Nancy Pelosi in the lead,  rushed to condemn and punish Omar for advancing antisemitic stereotypes. Rep. Juan Vargas (D.-Calif.) explicitly but unwittingly laid out exactly what Omar’s critics were actually doing when he tweeted:

It is disturbing that Rep. Omar continues to perpetuate hurtful antisemitic stereotypes that misrepresent our Jewish community. Additionally, questioning support for the US/Israel relationship is unacceptable. Israel has and remains a stalwart ally of the United States because of our countries’ shared interests and values. I condemn her remarks and believe she should apologize for her offensive comments.

This statement illustrates Omar’s points:  The United States’ allegiance to Israel, right or wrong, is unwavering, and any questioning of Israeli policy and the Palestinian plight is “unacceptable” and will be linked to  antisemitism in order to squash debate.

If Congress were sincerely offended by antisemitism and antisemitic tropes, and not just hellbent on silencing a much-needed questioning of US support of Israel, they would have found a way to condemn Trump when he failed to mention Jews in his statement commemorating the Holocaust. They would have written a resolution condemning the use of antisemitic tropes when Rep. Kevin McCarthy (R.-Calif.) singled out Jewish billionaires George Soros, Michael Bloomberg and Tom Steyer as trying to “buy” the election—or when Rep. Jim Jordan (R.-Ohio) referred to Steyer as “$teyer,” and accused Jewish Rep. Jerry Nadler (D.-NY) of being funded by him.

But they didn’t. Because neither Trump, nor McCarthy nor Jordan ever talk about Palestinians. And it’s discussion about the treatment of Palestinians, not antisemitic tropes, that they want to silence. 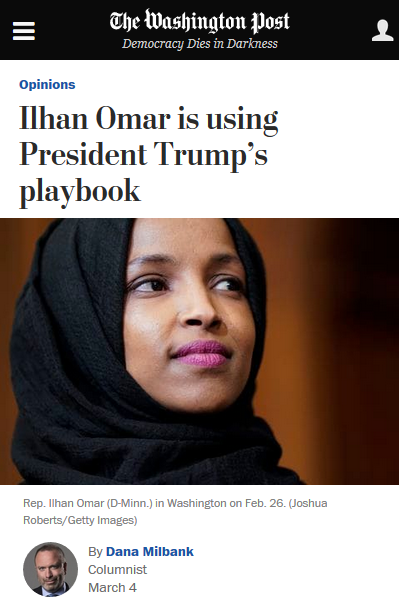 Dana Milbank (Washington Post, 3/4/19) accused Omar of suggesting “that Americans who support Israel — by implication, Jews — are disloyal to the United States.”

Journalists wore their bias on their sleeve.  At the Washington Post (3/4/19), Dana Milbank likened Omar’s bigotry to that of Donald Trump, accusing her of “using President Trump’s playbook.” And Henry Olson, who (3/4/19) likened her to Rep. Steve King (R.-Iowa), the congressmember who embraces white nationalism,  demanded that Omar be punished even if she had done nothing wrong:

History gives House Democrats a clear example of what they must do. The famous Roman leader Julius Caesar divorced his wife because of accusations that she had tried to meet a lover during a female-only religious ceremony. Even though the allegations were never proved, Caesar said his wife must be beyond suspicion andsent her packing. So, too, it must be with the Democrats. If they wish to credibly maintain that they have no tolerance for bigotry in any of its forms, they must be beyond suspicion of such. They must remove Omar from all of her committees now, or forever risk that bigotry will haunt them for the remainder of her time in office.

Even if Omar did not do what people are saying she did, Olson (“a senior fellow at the Ethics and Public Policy Center”) wants Democrats to treat Omar the same way a dictator two millennia ago punished his wife for an unproven offense. So much for loving our democratic principles and laws.

And if politicians and the mainstream media were sincerely concerned with bigotry, they would have condemned the theocratic, Islamophobic and Jewish chauvinist statement of Senate Majority Leader Chuck Schumer (D.-NY) in his March 2017 address to AIPAC about the Israeli/Palestinian conflict.  “Of course, we say it is our land, the Torah says it,” he said, but Arabs and Palestinians

don’t believe in the Torah. So that’s the reason there is not peace…and that is why we, in America, must stand strong with Israel through thick and thin.

First of all, religious Palestinians and Arabs (whether they’re Muslim—which Schumer was of course talking about—or Christian) do, in fact, believe in the Torah, since both religions incorporate it. But that’s beside the point. The Democratic leader of the Senate felt comfortable attributing a geopolitical conflict to Arabs not being Jewish. This is beyond the usual Islamophobic representation of Arabs and Palestinians being unreasonable fanatics, with whom it’s impossible to negotiate; Schumer is using religion to justify an occupation, and faulting Arabs for not being Jewish.

Omar’s points about the state of US politics when it comes to Israel were on the mark, as proven by the frenzy that followed them: Regardless of what she said, Ilhad Omar was labeled, and the discussion about foreign policy and engagement and human rights and humanitarian crises in Palestine averted.

Congress was too busy working on their resolution-writing this week to debate the March 4 decision by the State Department to close the US Consulate for Palestinians in Jerusalem, which functioned for decades as an American embassy for Palestinians under the authority of the US Consular General in Palestine. Renamed the Palestinian Affairs Unit, it will be folded into the US Embassy in Israel, overseen by the ambassador to Israel, marking a clear demotion of Palestinian status in relation to the United States.

Nor was there discussion in Congress this week about the United Nations report issued February 28, on violations and abuses of international humanitarian and human rights law in the Israeli response to 2018 protests in the Occupied Palestinian Territory. The report found that “more than 6,000 unarmed demonstrators were shot by military snipers, week after week at the protest sites,” from the start of the protests on March 30, 2018, through to December 31. “Snipers targeted people clearly identifiable as children, health workers and journalists,” and in all but two of the 189 fatalities investigated, the use of live ammunition by Israeli security forces against demonstrators was found to be unlawful. Nor was there discussion of Israel’s lack of cooperation with the investigation, or their quick dismissal of the findings, which included crimes against humanity.

It’s vital to have a discussion of such abuses, backed by $3 billion in annual US military aid to Israel. Instead, we got another debate on how to label Ilhan Omar. Which was exactly her point.