‘Death for Wotan’ by extremist militias in Ukraine

‘The Misanthropic Division is a fascist group that fights within the Azov battalion in Ukraine. They want to build a racist ‘People’s Community’ in Europe. The authorities pay little attention.’

Young men pose for the camera with a defiant gaze. In their hands, AK-47 assault rifles; on their arms, the badge of the Ukrainian Volunteer Azov Battalion. Those kneeling in the front row unfold a banner. Surrounded by SS skulls and Kalashnikovs, it says ‘Misanthropic Division Ukraine’. 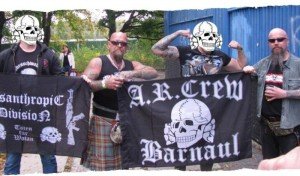 Much has been written, at least in the critical and interpretative left press, about rightwing militias in the Ukrainian civil war. The focus for a long time was on Svoboda and the Right Sector, the most visible fascist coalition during the Maidan protests.

Under the direction of the founders of Trisub, a nationalist paramilitary organization oriented to Hitler-collaborator Stephan Bandera, Dmitro Jarosch undertook a range of important tasks in the so-called Euromaidan on behalf of the Right Sector.

He established himself firmly in Ukraine’s political landscape and to this day exercises a dynamic military and ideological influence. While Jarosch and his “comrades”, like Svoboda’s Oleg Tjagniboks, are concerned to market themselves as a “modernized” nationalist movement, far more radical groups, more open to connections with the ideology of Hitler fascism, are growing.

Even during Maidan, in the fall of 2013 and spring of 2014, the ‘Social-National Assembly’ (SNA) and its affiliated organization ‘Ukrainian Patriot’ were recognizable as the most extreme, openly terrorist wing of the Rightist sector. The SNA formulated its position very clearly in a programmatic statement. It strives to achieve a “harmonious society” which can only be attained on the basis of race: “Our nationalism is nothing but a castle of sand if it does not rest on the foundations of blood and race.

“In the ‘national community’ each must find his rightful place because people are ‘inherently unequal.’ ”

Race is a “Precondition for the creation of civilization and the progress of mankind,” and one must bear in mind that not all races “are equally valuable… Beside the question of purity, the question of the value of the race is posed. Ukrainians belong to the largest and best part of the European white race.”

This ‘national community’ should be realized in a new political system, “Greater Ukraine”. The struggle for “Aryan-Ukrainian values” is at one and the same time the struggle for “the survival of European civilization in this global struggle.”

The SNA, which over time became independent from the Right Sector, now fights on the side of the Ukrainian government with its own military formation, the infamous Azov Battalion. Within the Azov Battalion we find the Misanthropic Division, founded in October 2013 from within the SNA, seen by its members as a “National Socialist paramilitary group” and which passed its baptism of fire in the “Ukrainian revolution,” as they call Euromaidan. The group is driven by a racist cult-like ideology that has its foundations in Nazi fascism, in “paganism” and a stress on hero cult and death fantasies.

“National Socialism is more than a doctrine, it is a philosophy of life and religion,” says an anonymous spokesman for the group in an interview on their official website.

Misanthropic Division follows a crude death and war cult, much like its Russian sister organization “Wotan youth”. The war will become an end in itself as the development of “supermen” who kill and die “in the service of the cause” is transfigured into the supreme duty. “Töten für Wotan” – “Killing for Wotan”, the motto runs.

“Right now,” as one of the group’s activists formulates their short-term goals, “we are at war” with ‘the Russian mafia and the Neosoviets’ “. In fighting “this new form of modern communism”, one fights ultimately “for the good of the whole of Europe”. This paramilitary formation is used in eastern Ukraine with the knowledge and support of Kiev against actual and suspected separatists. One can imagine how a group that sustains such beliefs deals with civilians.

Yet the Azov battalion is a recognized military formation, supported by the Ukrainian government. A critical note is not to be found among Kiev’s Western allies. Not one German or U.S. government call on Kiev to give up its cooperation with neo-Nazi militias is known. This has become tighter and tighter since the end of the Maidan occupation. The most scandalous expression of this co-operation is the fact that high-ranking cadres of the neo-Nazi movement are to be found in the Popular Front, the party of the former preferred candidate of the United States and today’s prime minister, Arseniy Yatsenyuk. Among the Popular Front’s “military advisors” are numerous right commanders, including Azov Battalion and SNA chief Andrij Bilezkij.

In the pro-Western and self-proclaimed liberal Ukrainian media, neo-Nazi warriors are celebrated as heroes. The “EuromaidanPR” news agency, which is followed by Western media as a reputable source despite its overt partisanship, published without comment on 29 January a call from the Azov Commanders to join the “brothers in arms at the front”. The Kyiv Post, one of the few English-language newspapers from Ukraine, uncritically told and retold heroic stories of the fascist militia: “[F]amous for their almost suicidal courage and ultra-nationalist views,” these fighters were the “spearhead” of the Ukrainian counter-offensive, said the news journal paper on 10 February 2015.

Distancing from the neo-Nazis is scarcely to be found in the pro-western part of the Ukrainian society.

Supplementary note, by Greg Butterfield, translator and creator of ‘Red Star over Donbass’ blog:
The Social National Assembly, which over time became independent from the Right Sector, now fights on the side of the Ukrainian government with its own military formation, the infamous Azov Battalion. Within the Azov Battalion, we find the Misanthropic Division, founded in October 2013 from within the SNA, seen by its members as a “National Socialist paramilitary group” and which passed its baptism of fire in the “Ukrainian revolution,” as they call Euromaidan. The group is driven by a racist cult-like ideology that has its foundations in Nazi fascism, “paganism” and a stress on hero cult and death fantasies.