Deadlock on Syria at Lavrov-Kerry talks in Geneva

The talks between John Kerry and Sergei Lavrov in Geneva on August 26 show that the U.S. and Russia remain as divided about the Syrian conflict as ever. All they seem able to do is to try to set out the basic terms of their conflict in order to prevent it escalating out of control. However, even that is probably too much for the hardliners in Washington. 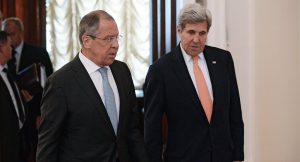 Sergei Lavrov and John Kerry ended 12 hours of talks in Geneva about Syria on Friday, but it is difficult to see what if anything of substance they achieved.

On the key political question – the Geneva peace process and the future of President Assad – they are as far apart as ever. The U.S. continues to insist that President Assad must go as the inevitable of any peace settlement. The Russians say that is strictly for the Syrian people to decide. There was clearly no movement by either side on this issue.

A great part of the talks was devoted to the issue of supposedly separating the so-called “moderate rebels” from Jabhat Al-Nusra and ISIS, the better to allow the U.S. and Russia to bomb both. The U.S. supposedly provided the Russians with a list of who they say these “moderate rebels” are.

This was, however, supposedly agreed between the U.S. and the Russians as long ago as February. Here we are at the end of August still discussing the same question. There is no sign that the “moderate rebels” in Syria are prepared to separate or dissociate themselves from Jabhat Al-Nusra. On the contrary in the “Great Battle of Aleppo” – to a chorus of praise from the Western media – they are alliled ever more closely with each other.

Better communications have supposedly been established between the Russian military command at Khmeimim air base in Syria and the U.S. military command in Jordan. Whilst this is always welcome, it is not at all clear what it means in practice.

The Russians and the U.S. politely agreed to differ on the Turkish capture of Jarablus. The U.S. actively supports the move, providing air support to the Turkish troops and their Syrian rebel allies involved in the operation. The Russians point out – correctly – that the Turks and the U.S. are acting illegally.

Lastly, there was some agreement about providing humanitarian supplies to Aleppo, with the UN’s Staffan de Mistura involved in this part of the discussions. It appears that this agreement is based on de Mistura’s and the Russians’ proposals for 48 hour weekly ceasefires.

In the end when pressed to say what the meeting with Kerry had actually achieved, Lavrov could only say, “It is an achievement that we have been able to reduce areas of misunderstanding and to reduce the level of mutual mistrust between the two countries.”

When a diplomat of Lavrov’s experience can only point to reducing “the areas of misunderstanding” and “the level of mutual distrust” as the “achievement” of a summit, then it is clear that on all the substantive issues there is complete deadlock.

Both countries continue to support their respective sides and are obviously not prepared to compromise either on that support or on the attainment of their mutually conflicting objectives. What they are doing is seeking to manage the conflict between them so as to prevent it from spiralling dangerously out of control. To what extent they can achieve even that is debatable, especially given that there are people in Washington who show no willingness to accept any restraint on their behaviour at all.

On the issue of achieving peace in Syria – or in any part of it – there is no sign of any progress at all.

Russia is furious at Turkish move to set up rebel “safe zone” inside Syria to assist Jihadi rebels there, putting the recently announced “normalisation of relations” between Russia and Turkey in jeopardy.

“We are for a united Syria. We do not support an independent Kurd initiative,” Kerry said, pointing out that the American forces have been engaging in cooperation with “a component” of the Kurdish forces on a “very limited basis.”

For his part, Lavrov said, “Kurds must remain a part of the Syrian state, part of resolving the problem, and not a factor that will be used to split Syria apart”…

Weighing in on the Turkish ‘Euphrates Shield’ operation in Syria, Lavrov reminded that all countries that had sent military forces to Syria, save for Russia and Iran, are doing so in violation of Syrian sovereignty. “Many countries are represented by their military and army elements on the ground in Syria, but only the Russian and Iranian contingents are staying there upon consent from Damascus,” Lavrov said. “Such is the reality.”

“Apparently, peace in the Middle East is impossible without taking into consideration the Kurdish stance. The current illegal Turkish military campaign in northern Syria under the pretext of fighting against terrorism is aimed at the Kurds,” Russian parliament’s Deputy Speaker Sergei Zheleznyak was quoted by the Russian media outlet Sputnik last Thursday.

“I’m convinced the Kurds should have a full-fledged representation in that process, should remain an integral part of the Syrian state,” Lavrov said on Saturday after discussing a solution to the Syrian crisis with his American counterpart, U.S. Secretary of State John Kerry.

Speaking to ARA News, Timur Akhmetov, a research analyst with a special focus on the Middle East and Turkish politics, said that the Russians do not want the Kurds to be either too strong or too weak. “It seems that Russia has a dilemma: on the one hand, it doesn’t want collide with Turkey again over the Kurds, on the other hand – Russia feels it needs to keep saying the formula “Kurds must also participate in the talks”,” Akhmetov said.

“Those statements are just usual rhetoric; it is always necessary to see if the words fit with the deed. I think now Russia wouldn’t mind that Kurdish positions be a little weakened by Turkey, but not to the extent that would render Kurds ineffective against other opposition groups in Syria. In short, Russia doesn’t want to see Kurds both as too weak and too strong,” he said.

“I think now Kurds have the impression that Russia is giving into Turkish ambitions vis-a-vis the Kurds, so Russia will need now to send the Kurds positive message, signaling that it still wants to cooperate with the Kurds,” Akhmetov told ARA News.

Fabrice Balanche, a Syria expert from the Washington Institute For Near East Policy, said that Russia backs Kurdish ambitions to link their enclaves [in northern Syria], despite earlier signs that Russia also backed the Turkish-led Jarabulus operation.

“The Syrian regime is obliged to follow Russia. Putin wants to allow the Kurds to open a corridor to Efrin from Manbij. A narrow corridor, protecting Aleppo from rebel attack and easy to close if PYD [Kurdish Democratic Union Party] is not smart with Putin,” Balanche told ARA News.

“Turkey knows its limit: 15 km inside Syria no more; after that Russia would shell Turkish troops and its rebels,” he said.