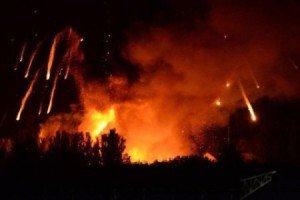 Fire and explosions at munitions warehouse in Svatove, eastern Ukraine on Oct 29, 2015

Two people have and eight are injured as a result of fire and explosions at a military arsenal in Svatove, Lugansk region of eastern Ukraine. The conflagration began in the early evening of October 29. Some news reports, citing Ukrainian government officials, say only one person was killed.

200 people were evacuated from the town and another 500 left voluntarily. Access to the town is blocked and checkpoints are in place to prevent panic and looting.

112.ua television reports that according to Ukrainian officials, the fire and explosions were detonated by several flares fired at the warehouse complex. More than 3500 tonnes of ammunition were stored there. Chaotic explosions hampered firefighting efforts for many hours. (See video at link below.) 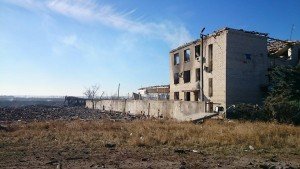 Officials say that nearly 500 private and multi-storey residential buildings in Svatove are damaged by the fire and shells. Nearly five thousand people left their homes for safety. The fire also spread to the woods around the town.

Interfax reports that the evacuated include 118 patients in the local hospital, 100 residents of the local home for elders and 16 boarding school students. 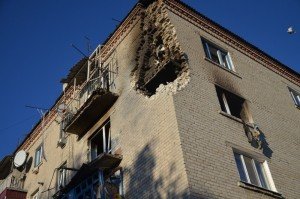 Residential building in Svatove damaged by explosion of munitions warehouse on Oct 30, 2015

Dramatic video and sound of the conflagration is here on YouTube: