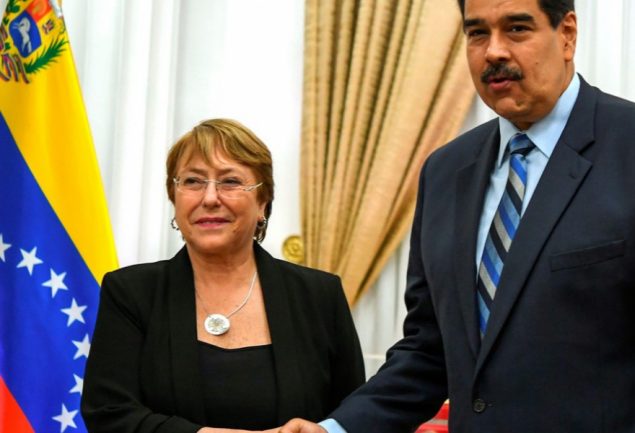 Former lawyer for the UN High Commissioner on Human Rights, Alfred de Zayas, says that High Commissioner Michelle Bachelet’s report on human rights in Venezuela mostly ignores the severity and responsibility of US sanctions against Venezuela

Listen, watch read in conjunction with:

UN Report on Venezuela Fails to Reflect the Causes and Severity of the Economic Crisis – Why? (2/2)

Alfred de Zayas is a professor of international law at numerous universities in the U.S., Canada, and Switzerland. He is also a retired senior lawyer with the Office of the High Commissioner for Human Rights, as well as a retired chief of the Petitions Department at OHCHR. Alfred is also the author of nine books.

GREG WILPERT It’s The Real News Network and I’m Greg Wilpert in Baltimore. Last week, the United Nations High Commissioner on Human Rights, Michelle Bachelet, released a report on the human rights situation in Venezuela. The report can safely be described as being quite scathing of the human rights situation. Here is an excerpt of Bachelet’s presentation of the report.

MICHELLE BACHELET, UN HIGH COMMISSIONER FOR HUMAN RIGHTS As the report makes clear, essential institutions under the rule of law in Venezuela have been eroded. The exercise of freedom of opinion, expression, association, and assembly, and the right to participate in public life entails a risk of reprisals and repression. Our report notes attacks against actual or perceived political opponents and human rights defenders ranging from threats and smear campaigns to arbitrary detention, torture and ill treatment, sexual violence, killings, and forced disappearance.

GREG WILPERT The government of Venezuelan President Nicolas Maduro slammed the report for being one-sided. The Foreign Ministry said the report mostly ignored the impact of US economic sanctions on Venezuela, as well as information presented by Venezuelan human rights NGOs that highlighted the violence committed by opposition supporters.

Joining me now to discuss the UN Human Rights report on Venezuela is Alfred de Zayas. He’s a retired senior lawyer with the Office of the High Commissioner for Human Rights as well as a retired chief of the petitions department at the OHCHR. Back in late 2017, he visited Venezuela as an independent expert from the UN. So let’s start out with the report in general. What is your reaction to the report on Venezuela given what you know about the human rights situation there? Was it balanced?

ALFRED DE ZAYAS I’m rather disappointed because I had the opportunity of briefing Michelle Bachelet’s assistant for an hour and delivering a considerable amount of documentation. I also pointed out which were the conclusions, findings of my own report for the Human Rights Council, and how I thought that a constructive dialogue with the government of Venezuela should be conducted so as to help the Venezuelan people. It’s not a question of giving aid and comfort to the government. It’s a question of helping the people who are suffering. Why are they suffering? Primarily because there is a major economic crisis. What are the causes of the economic crisis? First of all, that drastic drop in the price of oil back in 2014. Venezuela has less than half the income that it used to have. But most importantly, the economic war, which is not new.

The economic war started in 1999 when Chavez became President of Venezuela and there was, of course, a coup d’état of 2002. And then, the sanctions imposed by Obama and later by Trump. Now, these sanctions are the direct cause of death. The direct cause of death through malnutrition, death through lack of access to certain medicines. The government is bending over backwards to buy the necessary medicine, to buy the necessary food. Venezuela is not self-sufficient. This is not something that is the fault of the Chavez or the Maduro government. I mean, this has been the model of the Venezuelan economy for 100 years. They are dependent on the sale of oil. Now, if the United States confiscates or freezes billions and billions of dollars that belong to the Venezuelan people, if the bank in England similarly refuses to return $1.5 billion-worth of gold, and if some 40 bank institutions in the world have frozen more than $5 billion— how is Venezuela going to purchase the food and the medicines that it needs?

It still does a remarkable job of doubling the available resources, but then, there is the problem of sanctions. Any businessman, any entrepreneur who wants to do business with Venezuela knows that he is risking major penalties. I’m not talking about $10,000. I’m talking about $50,000, $100,000, $200,000. So if you are an entrepreneur and you know it’s going to cost you that kind of money, why are you going to take the risk? So you pass over Venezuela. Going back to the report of Michelle Bachelet, on the optimistic side I can say bravo. She personally has been in Venezuela. She has spoken with both the opposition and the government, with many ministers. She has been given an enormous amount of information. Why is their report so deficient? And it is very deficient. It is very disappointing. Why? Because it was drafted by the same team that had drafted the reports of Zeid Ra’ad Al Hussein. Michelle Bachelet has inherited a team. In this team—

GREG WILPERT I want to get into that issue in a moment, but first, I just want to ask you something else about the report itself. I mean, one of the things, and you touched on this already, but I just want to quote from the report because I think it’s kind of interesting. One of the things that she says in the report, or I don’t know if it’s her, or her assistants say, “The government has not demonstrated that it has used all resources at its disposal to ensure the progressive realization of the right to food, nor that it has unsuccessfully sought international assistance to address gaps.” Then it goes on also to say that, “Violations of the right to health resulted from the Government’s failure to fulfill its core obligations, which are non-derogable, even for economic reasons.” And then finally, she does say something about the economic sanctions, but basically ends up dismissing them. Now one of the things, and I think it’s important to always keep in mind that the report also of course talks very scathingly about the political freedoms, and also about the 5,000 or plus people that have been killed in confrontations with the police, which it calls extrajudicial killings basically. Now that’s a very serious allegation, but on the other hand, from what I have just quoted, the report seems to ignore the sanctions for the most part. And according to one analysis that is by Mark Weisbrot and Jeffrey Sachs, as many as 40,000 people were killed or died due to a lack of access to medicine and to food. Now, given the—

GREG WILPERT Right, right. Now given all of that, what would you say should actually be the UN’s role in dealing with this kind of a situation?

ALFRED DE ZAYAS Coordinating all the agencies. When I was in Venezuela, I called in the FAO, and WHO, UNHCR, UN Women, etc. to say, look, how can we help the Venezuelan people? Indeed, shortly after my visit, new arrangements were made between some of these United Nations agencies and the government, and they are helping the government. So do the International Committee of the Red Cross, the International Federation of Red Cross and Red Crescent Societies, so there is some progress. But the report is unfortunately, fundamentally flawed. The major problem is methodology. When you are a researcher, it doesn’t even have to be a legal investigation, even if you are a historian, you have to listen to all sides. You have to evaluate all of the evidence, and then you have to reflect it professionally.

What has happened here is that an enormous amount of information that was made available to the High Commissioner—And not just during her visit because her team was there already in March. She went now for three days, but at least 50 nongovernmental organizations on the ground in Venezuela—Such as, Fundalatin, which is a very old Venezuelan NGO. It’s not a GONGO. It’s not a government NGO. Fundalatin, Grupo Sures, and Red Nacional de Derechos Humanos did give Michelle Bachelet material. But when did she receive that material, and why was it not taken into account? Because you don’t find a footnote in her report to any of these sources, nor do you find a footnote to my own report, or to my findings and conclusions, so there’s something wrong. And I attribute that—Because I am a former staffer of the Office of the High Commissioner for Human Rights and I know how things work. There are people with prejudices. They have an axe to grind and they grind it and they omit information that just doesn’t fit the matrix that they want to put forward.

Now this, of course, is not just a problem of methodology. This is also a problem of ethics. I find that the professional ethics of a staff member must include a true reproduction of the information received from all sources. Obviously you can discard information if you think this just comes from the press, this is fake news, this is not serious. But the information given to the High Commissioner, I have seen much of that information, which also dates back to 2017, and none of it was ever reflected by Zeid Ra’ad Al Hussein, and is also not reflected by this new report. So that my recommendation— and I’ve already put it in writing, and I’ve already informed the office of my opinion— I think it is necessary for the credibility of the office to change the team that has been doing these reports in the past because they have proven not to be objective. They have proven not to follow what I would consider the minimum requirements of any serious research.

I think that not giving appropriate weight to the violence of the guarimbas, of the opposition, not going into the dislocation, the disturbance of repeated attempts at overthrowing the government, the coup d’état, the unilateral declaration of the presidency of Guaido, followed by the so-called humanitarian aid that the United States was going to force from Colombia into Venezuela, followed by the call to the army to overthrow Maduro on the 30th of April last, etc., the attempts on the life of Maduro himself—All of these things have an impact on the functioning of any government. And you mentioned the figure of 5,000 persons who are said to have lost their lives in the context of resistance to state authority. My understanding is that that figure actually encompasses common criminals, encompasses persons engaged in sabotage, persons engaged in contraband who have of course resisted the government. But back in 2017, and I’ve seen the videos, the opposition used Molotov cocktails. The opposition used real bullets. The opposition burned alive seven human beings.

GREG WILPERT Okay. Well, we’re going to have to conclude this part one, this first part of our discussion with you. And I invite people to tune in for the second part where we will go into the details of why it is that this report has been flawed, according to you. So I was speaking to Alfred de Zayas, retired senior lawyer with the Office of the High Commissioner for Human Rights. Thanks again, Alfred, for having joined us. And again, as I said, join us for part two.