De-Sovietization by bombs, and the crown of the Russian Empire

I begin this reflection with a personal note. When the Euromaidan protest movement erupted in central and western Ukraine in December of 2013, I had a discussion with a Canadian political scientist about the opposing, ‘Anti-Maidan’ movement. He made condescending remarks about the people who came to Anti-Maidan in Kyiv from the regions of eastern and southern Ukraine–Donetsk, Luhansk, Zaporizzhia, Kherson, Odessa. He followed a popular narrative of the pro-Western, “democratic” Ukrainian media–these people were brought to Kyiv by the Party of Regions in an old Soviet style: ‘Get on the train to Kyiv or you will lose your jobs’.

Somehow, these people were a priori deprived of even a chance of having their own opinion, their own agency. According to many Ukrainian media, they are Downbass (a play on words, referring to Down’s syndrome), kolorady (‘beetles’ or ‘roaches’, referring to the black-orange colors of the Georgian ribbon, symbol of Soviet victory in WW2, similar colors to the Colorado potato beetle, a widespread insect pest in Ukraine), slow-witted Sovky (from the word ‘Soviet’ – a sarcastic, pejorative name for those said to be nostalgic for Soviet times, slaves who will obey whatever their Party bosses tell them to do).

They are not capable of mobilization, it is said. Oh no, they just want stability and order, even if it is all based on corruption. They do not want to be free, oh no. They do not understand ‘revolutionary’ slogans about individual freedom, free markets and human rights. What rights? They are happy in their ignorance and serfdom. They are so blind they cling to a criminal turned-president, because he is one of theirs. (The ousted President Victor Yanukovych had a past criminal record.—HM) They are servile and dumb sheep, happy to have some hay in their manger, and even that hay does not have to be of the best quality. Oh, I almost forgot: and they drink a lot. Meet Homo Sovieticus.

But no, this is all so wrong. They did work. They were proud of their work, and even happened to believe in the egalitarian ideals of socialism. They appreciated free health care and free education. In spite of living in a “closed” society, they listened to the Beatles and Jimi Hendrix, they read Franz Kafka and Gabriel García Márquez, went to operas and theaters. These people have good memories of their Soviet past. I know, because I have such memories too.

They are not in a hurry to join the European Union because they know that such a move will cost many of them their jobs, social benefits and inexpensive public transportation. So what does the new Ukraine government decide to do? It will drag them kicking and screaming to the promised land of Europe. They will be ‘civilized’, against their own will. They will be made to understand that clinging to Russia is clinging to a corrupt, authoritarian state in which Red Tsar Putin reigns, dreaming of restoring if not a Soviet empire, then at least a Russian empire.

I once read the recollections of a famous Ukrainian writer, Yuri Andrukhovych, written after the Orange Revolution of 2004. He said that at some point, an uncomfortable realization came upon him that they (European, enlightened Ukraine) will be stuck in the same country with these ‘Sovky’ from Donbas. He was even criticized by some patriotic citizens for having dared to say aloud what others were thinking silently: that Ukraine would be better off without Donbas. Such people believe Donbas is like a fetter on the legs of a free Ukraine which is desperately trying to escape from the deadly embrace of Russian totalitarianism. “Let Crimea and Donbas go, and we will build Europe in Ukraine much faster.”

Another Ukrainian intellectual and writer from Western Ukraine, Volodymyr Pavliv, has a different take on Eastern Ukraine. He calls it “Ukraine B” or Ukraine of a slower speed which has not shed its Soviet, Communist past. “Ukraine A” that freed itself from the Soviet yoke, even before 1990, has to be patient and help the backward Ukraine B to catch up to the life according to Western values. Ukraine A has to implement fast and radical reforms and build a new state so that when Ukraine B finally comes to Ukraine A, Ukraine A will dictate its conditions, not Ukraine B.

In the current political development, Ukraine A is de-Sovietizing Ukraine B not only by destroying Lenin monuments but also by shelling Soviet-time buildings and streets, in which Donetsk and Luhansk residents happen to live. Ukraine A prefers killing those who think and live differently. And of course, the people of Ukraine B who took up arms because Kyiv would not listen to them are all Russia-backed terrorists and separatists. Authoritarian, backward Russia is precisely like them – it staunchly refuses to give in to American missionaries who want to convert Russia into neoliberal democracy. 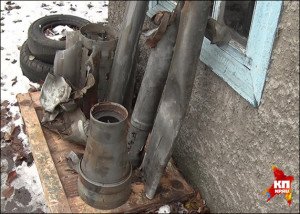 Pictured in the first photo are the “peaceful” tools by which a “democratic” government in Kyiv is de-Sovietizing the Donbas region—casings left over from artillery barrages against civilians by the Ukrainian army.[1]

The second photo shows what a Donetsk blacksmith named Viktor Mikhalev transforms the shell casings into–a replica of the ancient crown of the Russian Empire. He wants to offer it as a gift to Russian President Vladimir Putin. Viktor made this crown from the splinters of Ukrainian shells that have been falling on Donetsk for many months now. When the shelling started, Viktor dug a shelter for his family in the garden behind his house. It took him a month and a half to dig. He fortified it with poles, as in a coal mine, and brought there a reserve of water, potatoes, an old kerosene lamp and an icon. 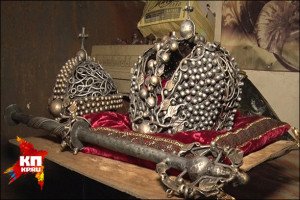 In his small blacksmith shop, there is enough place for an anvil and a table for assembling the prefabricated elements. All sorts of tools are neatly hung on the walls.

The blacksmith explains to a correspondent of Komsomolskaia Pravda newspaper that the idea to manufacture a crown came to him during a typical working day. When military operations, Kyiv’s so-called Anti-Terrorist Operation, began against Donetsk and Luhansk regions in the spring of 2014, Viktor and his friends started collecting metallic splinters of shells and bombs. First they wanted to make a three-meter long stele (a metallic slab monument) that would be a symbol of resistance and invincibility. Not all of the splinters are well suited for forging, though, explains Viktor. For instance, splinters from Grad rockets are covered with zinc. Only after the zinc is burned off does the metal becomes soft and malleable. Metal from Uragan rockets is not suited at all – it is too hard. Viktor turned and twisted those splinters for some time until he got an idea – to make a crown. It took him a month to fabricate it.

Viktor hopes that one day he will be able to present the crown to Vladimir Putin. In the discourse of enlightened European Ukrainians, this would be a gesture of idolatry – a simple-minded worker expresses his admiration to an all-mighty Tsar of All-Russia. To me, it is a sign of respect from a skillful craftsman to a leader who has made ordinary Russians feel proud again of being who they are. It is all a matter of perspective. But human life is priceless no matter the perspective. Is it honorable to kill the blacksmith Viktor because he thinks differently? Is it not better to let Ukraine B decide for itself what and where it wants to be?

Ukraine A aspires to a strong and unified Ukraine. But the rulers of this Ukraine want to make the country a culturally intolerant monolith. They will never win the hearts of Donbas people to such an ideal. In fact, people throughout Ukraine are also rejecting it. Thousands of the present and future conscript soldiers of Ukraine A’s army have voted with their feet in the recent war by walking away from the battlefronts or by refusing to show up for the conscription call of duty. Their actions give hope for a tolerant and inclusive Ukraine that could stand among the progressive and peace-loving countries of the Earth.

Notes:
[1] The story and the two pictured photos are from the Russian-language publication in Komsomolskaia Pravda in the Donbas region of eastern Ukraine, edition of December 12, 2014.