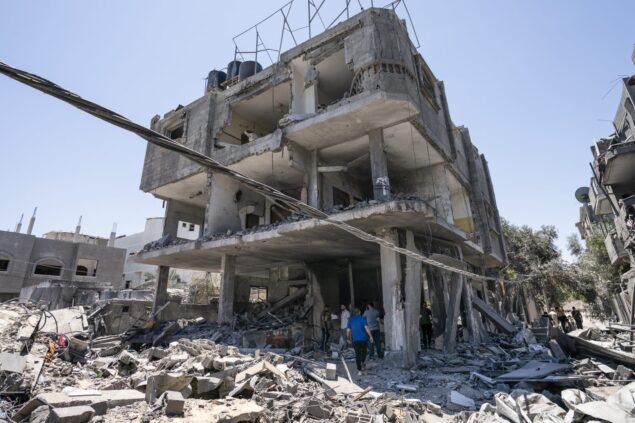 Neighbors walk among the rubble of a building destroyed by an airstrike in Gaza. Photo: AP Photo/John Minchillo

Even as the administration takes steps to aid Gaza, its State Department has approved a $735-million sale of bombs to Israel, bypassing congressional opposition.

Today [May 25], the Biden administration committed more than $5 million to rebuilding Gaza after Israeli bombing left swathes of the territory in ruins, with medical facilities, homes, and roads destroyed or damaged by the aerial attack that killed at least 248 people this month.

But even as the administration takes steps to aid Gaza, its State Department has approved a $735-million sale of bombs to Israel, bypassing congressional opposition. On May 21st, according to a congressional staffer, the department granted Boeing an export license for the sale of Joint Direct Attack Munitions and Small Diameter Bombs—two kinds of laser-guided munitions that were reportedly used by Israel in the 11-day attack on the Gaza Strip that ended on Friday with a ceasefire between Israel and Hamas.

Together, these two developments—the commitment of humanitarian aid and the ongoing sale of weapons—suggest that the Biden administration’s policy on Israel/Palestine will depart little from that of previous Democratic administrations. For decades, the US has delivered millions of dollars in humanitarian relief for Palestinians in a bid to stave off Palestinian uprisings that could shake the Middle East. At the same time, the US has sent Israel billions of dollars in military aid that helps fund human rights abuses in the West Bank and Gaza. Despite increasing criticism from the progressive wing of the Democratic Party for this aid paradigm—both sides of which serve, in different ways, to support Israel’s occupation of the Palestinian territories—the Biden administration’s recent moves are consistent with its predecessors’ approach to the region.

Against the backdrop of new weapons sales, humanitarian aid “is a Band-Aid on a bullet wound, and the US is paying for the Band-Aid, the bullet, and the gun,” Raed Jarrar, advocacy director for the human rights group Democracy for the Arab World Now, said in an interview. “Humanitarian aid is important, but the US government should stop its support for Israel’s blockade and attacks on Gaza rather than subsidizing the status quo.”

The approval of the export license for the arms sale, which progressive legislators had tried to block at an earlier stage, immediately spurred opposition from Senator Bernie Sanders. On Friday, Sanders was notified that the sale had gone through and responded by placing a hold on all State Department nominees, blocking Congress from considering them for diplomatic posts, the Sanders office told Jewish Currents. After the administration committed to humanitarian aid for the rebuilding of Gaza, Sanders lifted the hold.

While Sanders strongly supports Biden’s steps to aid Gaza, according to his office, he also conveyed to the administration that “simply returning to the pre-war status quo was insufficient, that the deeper causes of the conflict, such as the Gaza blockade and evictions in Jerusalem, needed to be addressed,” read a statement sent to Jewish Currents from Sanders’s office. “He also made clear that he and his colleagues would continue to push for greater debate to make sure that US arms sales do not support human rights abuses.” Sanders’s office added that Deputy Secretary of State Wendy Sherman had “committed to a continuing dialogue on these issues.”

Sanders’s move was only the latest attempt to bring congressional oversight to the arms sale. Last week, Sanders and Congresswoman Alexandria Ocasio-Cortez, working with Reps. Rashida Tlaib and Mark Pocan, introduced resolutions into the legislature to block the sale of Joint Direct Attack Munitions and Small Diameter Bombs to Israel. The resolutions marked a historic break with the Democratic Party’s consensus position on Israel: It has long been taboo for members of Congress to question the $3.8 billion in military aid that the US sends to Israel every year. Ocasio-Cortez’s resolution, which garnered the support of 14 other members of Congress, was sent to the House Foreign Affairs Committee (HFAC), where it is unlikely to receive a vote. Under Senate rules, however, Sanders has the option to force a vote on the weapons sale. Though Sanders did not attract any co-sponsors upon introduction and would have struggled to amass even a few votes in support of his resolution, forcing a vote would have pushed Democrats to go on the record in support of the weapons sale, perhaps angering a segment of the Democratic Party base that has grown more critical of Israel.

Members of congress and human rights advocates argue that State Department staff should have waited for Congressional debate to take place, even if the department had the power to go ahead with the sale. Under the Arms Export Control Act, the State Department is required to give Congress notification of a pending arms sale to Israel 15 days before moving ahead with a sale. Though the 15-day period elapsed on May 20th, the State Department was aware that members of Congress had raised objections to the sale in the resolutions that were reported by The Washington Post and Jewish Currents.

“Support or oppose the sale, everyone should be concerned about the complete lack of congressional oversight involved here,” Congresswoman Rashida Tlaib told Jewish Currents. “The State Department should immediately revoke approval for this arms sale to, at minimum, allow for proper debate in Congress. Remember that these are weapons of war and destruction that will be used to kill children, bomb hospitals, homes, and schools—lives literally hang in the balance.”

“The State Department’s decision to ignore congressional concerns and approve the sale of Joint Direct Attack Munitions kits to Israel is remarkably tone-deaf and callous,” Congresswoman Betty McCollum told Jewish Currents. “Only days ago, the world was watching Israel’s precision-guided ordnance kill more than 100 Palestinian children and women. This decision is a setback to the cause of peace.”

Asked for comment last Friday on whether the State Department planned to grant the export license to Boeing, a State Department spokesperson told Jewish Currents: “We are restricted under federal law and regulation from publicly commenting on or confirming details of licensing activity related to direct commercial sales of export-controlled defense articles or services.” On Sunday, Secretary of State Antony Blinken said the Biden administration planned to go through with the weapons sale “in consultation with Congress,” though he did not say the State Department had already granted the export license. The State Department has not returned a request for comment sent on Monday about the granting of the license.

It’s unclear what the State Department’s granting of the export license to sell the bombs means for the future of congressional efforts to debate and vote on the sale. Under the Foreign Assistance Act, Sanders can introduce a new resolution at any time, requesting that the Secretary of State formally investigate Israel’s human rights record—a process that could enable Congress to impose new conditions on US military aid to Israel. That resolution would be “privileged” under Senate rules, meaning that Sanders could force a vote on it—though he would be unlikely to receive the 51 votes needed to move forward. It remains unclear whether Sanders would take such a step.

In recent years progressive Democrats such as Reps. Betty McCollum, Rashida Tlaib, Mark Pocan and others have attempted to prevent US military aid to Israel from being used to further abuses of Palestinian rights. The Sanders and Ocasio-Cortez resolutions, while unlikely to pass, mark a new phase in the progressive break from the Democratic establishment on Israel: Whereas McCollum’s bill would not cut US aid to Israel—instead restricting Israel from using it to demolish Palestinian homes and arrest Palestinian children—the Sanders and Ocasio-Cortez efforts were an attempt to block the delivery of bombs to Israel, an unprecedented step.

For now, human rights advocates are continuing to work to stop the $735 million Boeing sale of bombs to Israel by turning to a long-shot demand: asking the State Department to revoke a license it already granted.

“The State Department should revoke this Boeing export license and wait until Congress has had the chance to debate and vote on the shameful arms sale to Israel,” said Jarrar. “There is no reason to approve additional weapons to Israel—let alone through a process wrought with errors and missteps.”

Alex Kane is a Jewish Currents contributing writer and a journalist who writes on the politics of Israel/Palestine in the US. 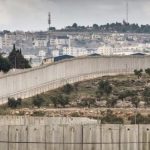 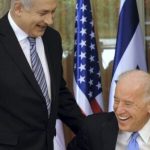