Holding the EU together

Stressed by a long recession and a new refugee crisis, the European Union granted extraordinary concessions to London to keep Great Britain from splitting away from the Continent, but the glue holding the fragile union together may increasingly be an exaggerated fear of Russia, writes Gilbert Doctorow. 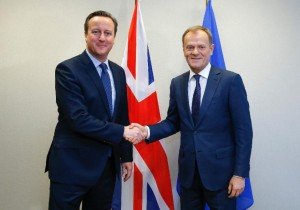 On Saturday, we woke up to the largely unexpected news of a solution to Britain’s demand for officially recognized “special status’” within the European Union. Just hours earlier, the reporters of Euronews were busily explaining that there was lack of consensus among the heads of state in the European Council about the deep concessions demanded by the British government.

We were told time was running out, that the debates on Britain had pushed aside much needed discussion of the migrant crisis, also planned for the summit that began Thursday evening. For British Prime Minister David Cameron, any postponement of a deal would have jeopardized his plans for a referendum on Brexit later this spring.

After the “special status” agreement, there were mostly smiles among the high European Union officials interviewed for comments on the compromise deal. Commission President Jean-Claude Juncker and Council President Donald Tusk were visibly delighted at having pulled the rabbit from a hat. Meanwhile, the facial expressions of French President Francois Hollande and Belgian Prime Minister Charles Michel betrayed disappointment and resignation.

Though it is by no means clear that the concessions that Cameron received in Brussels will be enough to overcome the opposition from “Brexit” partisans in the U.K. and give EU supporters the upper hand in a tight contest of public opinion, the concessions were, in fact, tangible, significant and immediate. For the EU, they put in question the momentum towards ever greater unity, a goal from which the British received an express opt-out.

The settlement also allows Britain to cut benefits to nationals of other EU member states residing in England and so to jeopardize the freedom of movement within the EU that continentals recognize as a fundamental pillar of their association.

And the settlement removed from discussion the notion of eventual universality of the euro currency within the EU, which means there will remain a contradiction in the decision-making procedures of the EU perpetuating two qualities of membership – those in and outside the currency union. Yet, visible campaigners for European federalism like Belgium’s Guy Verhofstadt were on the side of granting Britain its coveted “special status” from the beginning.

So what is going on? I will call attention here to two small but revelatory signs of what, and ultimately who drove the otherwise puzzling consensus on concessions to Britain that mortgage Europe’s future.

One sign is the high visibility accorded to one head of state, Dalia Grybauskaite, from start to finish in coverage of the European summit. As president of Lithuania, she is nominally a very minor figure at the far eastern border of the EU whose views should carry no weight in decisions taken by the “big boys” in Brussels. And yet, her entry to the summit was caught by Euronews reporters who hung on her words. And when all the work of the summit was concluded, it was a tweet from Grybauskaite that first announced the deal to the world, ahead of tweets by Council president Tusk or other participants.

The only possible relevance of Grybauskaite’s featured status at the summit was her position as leader of the anti-Russian faction. From the start of the campaign to woo Ukraine into an association with the EU and away from Russia, through the EU Summit in Vilnius in 2013 that then Ukrainian President Viktor Yanukovych spoiled, and on to the imposition of sanctions against Russia over its “annexation” of Crimea and intervention in Donbass, Grybauskaite has been out front crying wolf over the supposed Russian threat to eastern European states.

The second and confirming sign of what drove the compromise came from none other than David Cameron in his first remarks to the press following the “British dinner” that concluded the Summit in Brussels. Cleverness is not one of Cameron’s strong suits, and his comments put out for public consumption what logically should have remained behind closed doors of the Council, namely that striking a deal, one might say any deal with Britain was very important if Europe were to face the supposed threat to its security from Russian “aggression”.

Thus, Cameron explicitly and Grybauskaite implicitly tell us that this deal on Britain’s relationship with the EU and the EU’s overall prospects for the future hang on one issue: the consensus view on Russia. For those of us who have hoped the genuine divisions within Europe on sanctions against Russia based on conflicting economic and security interests of member states would lead to their scrapping wholly or partially in July, what happened in Brussels on Friday is not good news. And to those who may wonder how this particular configuration of interests came about, the strings lead back to Washington.

Read also:
Cameron will put ‘heart and soul’ into staying in EU after sealing deal, The Guardian, Feb 20, 1016 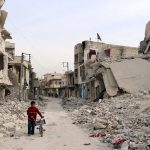