In this subtle war, men of the Free Syrian Army are being allowed to rejoin the ranks of the government army they deserted on their return to the shattered neighbourhood of al-Qadam

DAMASCUS – “That is a military zone,” a Syrian soldier warned, as I went to inspect the ruins at the end of Ibn Hawqal Street. But I could not see any Syrian military positions amid the ruins, not even a checkpoint. 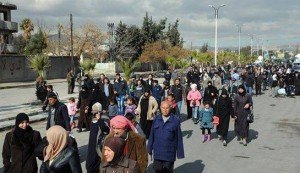 ‘500 families return to Al-Qadam as part of reconciliation plan in southern Damascus’, image on Twitter, Jan 20, 2016

“This is a military zone,” he said more sharply. Then I realised. How many kilometres away is ISIS, I asked? “Down there,” said the soldier. “About 200 metres.”

And I looked down a broken laneway, veined by the midday sun, a deserted, squalid place of crumpled homes that makes its appearance along all front lines in cities at war, in Damascus, in Aleppo, in Fallujah, in Sarajevo, in Beirut in the old days, no doubt in Cherbourg once and Stalingrad, too, and long ago, in my father’s war, in the little villages on the Somme.

Also by Robert Fisk in The Independent: Syrian soldiers on the Latakia Front finally taste the fruits of victory – but they know Isis is not dead, Feb 18, 2016

No this is not the Great War – though it has lasted far longer – and such comparisons somehow take away the dignity of those who try to return to live in these ruins. Syria is Syria, not Iraq or Bosnia or part of a world war – though there are Arabs who do claim that all this is part of World War Three. Did the Americans not threaten to bomb Damascus? Are the Russian air force not now bombing Isis? Is Turkey not now threatening to invade Syria? And Saudi Arabia? 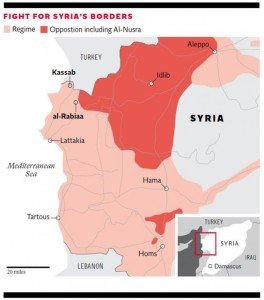 But what is happening in al-Qadam tells you a lot about the Syrian war. Once in the hands of Jabhat al-Nusra, it lay rotting through three years, under government control but almost empty, until the army struck north of Aleppo and began to conquer its enemies along the Turkish border – and the people started to come back to al-Qadam.

Twenty-six families in the past 15 days alone, even a drift back of former “Free Syrian Army” men – part of David Cameron’s mythical army of 70,000 “moderates”, one supposes – and five prisoners released from government jails. Victory brings confidence, however temporary, and you can sniff it on the government front lines far from Aleppo.

There are fewer checkpoints in Damascus, 100 women dancing the “dubkah” at a noisy hen party in one of the big hotels, convoys of trucks humming across the Lebanese border en-route to Jordan now that the Syrian army has re-opened the main road to Deraa. Syrians drive to Aleppo up the highway again. On Syrian television, there are action shots of Syrian paratroopers entering towns they had not seen for three years. And in al-Qadam, its streets named after ancient Arab philosophers and travellers, they are also returning.

There is even a “reconciliation committee” of elders who talk to both the army and the Free Syrian army – not to ISIS or al-Nusra, they all insist – and who drink coffee with the government soldiers. Rather a lot of meals, an army intelligence officer tells me. Some of the Free Syrian Army men from al-Qadam have been allowed to keep their light weapons – after forswearing their opposition to the regime – and the government army has allowed them food and medicine. Several have been allowed to return to the ranks of the army they deserted, new ranks of course, paid once more by the government. “Yes, of course we knew many of them,” a soldier says. It is a subtle war. Get the opposition to change sides, especially now that they have tasted the bitter fruit of ISIS’s ideology and understood the power of Russia’s air force. It seems to work. Silence has settled over the front line here.

“Syria, Assad” has been spray painted over the walls in red. Al-Nusra’s slogans have been so heavily painted over in blue that you can no longer make out what they said. Except for the word “Allah”. The army left God’s name untouched. Half a mile back, three soldiers sit on chairs beside a T-72 tank that nestles in the shadow of an alleyway, its barrel pointing upwards. They are drinking coffee.

Thaled Fado is part of the “reconciliation committee”. A construction man – he agrees there will be plenty to reconstruct – he wanted to be a pilot and travelled Europe to further his ambition and lived in Barcelona and inevitably ran out of money.

“There is peace here now,” he says. “The army took this place back from Nusra a long time ago, but now the people themselves are coming back. We talk to the army. This is my home.”

But “home” – inherited from his father – has no roof. Like all the other houses in this poor, devastated suburb, they were looted and burned by al-Nusra. One lady in a green dress – this is not yet the time to discard anonymity for most of these people – described how al-Nusra came to this place three years ago. “We did not know them and I tried to stay, but then they came to our home and slaughtered my husband and I fled with my children.”

Now she stands near Thaled Fado and smiles at the stranger who has come to look at this tiny corner of Syrian misery. A bearded soldier is smiling, too, and I guess why. He tells me I am right: he has just come from Aleppo.

His family live here and have returned, and it slowly becomes clear that many of these families had sons in the military and supported the regime. And al-Nusra turned on them with a vengeance. Hence all the burned homes – only a few repaired – and the still smashed minaret of the local mosque. 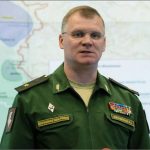 Russian Ministry of Defense answers Western gov’ts and media regarding the situation in SyriaMultipolarity, Russia

Robert Fisk in Syria: Syrian soldiers on the Latakia Front finally taste the fruits of victory – but they know Isis is not deadMultipolarity