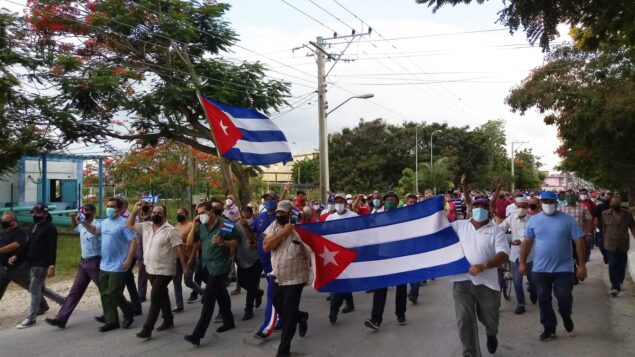 Cubans in Holguín respond to the call of President Miguel Díaz-Canel Bermúdez to take to the streets in defense of the Revolution as the U.S. government tries to provoke destabilization by utilizing paid agents on the ground. Kawsachun News /Twitter

President Miguel Díaz-Canel Bermúdez addressed the nation this afternoon calling on all revolutionaries to defend Cuba in the streets.

Counter-revolutionaries lending themselves to a U.S. strategy of ideological subversion don’t want health for Cuba; their model is the neoliberal model.

“The Revolution must be defended by all revolutionaries and on the front line, the communists.”

President Miguel Díaz-Canel Bermúdez addressed the nation this afternoon calling on all revolutionaries to defend Cuba in the streets.

Cubans in Holguín respond to the call of President @DiazCanelB to take to the streets in defense of the Revolution as the U.S. government tries to provoke destabilization by utilizing paid agents on the ground. pic.twitter.com/bMS0dVOFhl

"Viva Fidel!" The revolutionary people of Cuba fill the streets to protect their Revolution and sovereignty from imperialist attacks.pic.twitter.com/3CnrgyOMst

Cubans chant "I am Fidel!", as thousands flood the streets in defense of the revolution.  pic.twitter.com/dAqyPRiYm2

'If they want to do something for Cuba, then lift the blockade on Cuba' says @DiazCanelB pic.twitter.com/SgHL0TXVuY

(Use the auto-translate feature)

We have to interrupt our family’s Sunday activities to share with you a series of events that have been taking place this Sunday as part of the counterrevolution’s provocations in the country, said the First Secretary of the Central Committee of the Party and President of the Republic, Miguel Díaz-Canel Bermúdez.

The First Secretary of the Central Committee of the Communist Party of Cuba and President of the Republic of Cuba, Miguel Díaz-Canel Bermúdez, appeared live on national radio and television at 4:00 pm.

“We have been honest, we have been diaphanous, we have been clear and at every moment we have been explaining to our people the complexities of the current times. I remind you that more than a year and a half ago, when the second semester of 2019 began, we had to explain that we were going to a difficult juncture. This was taken as part of the popular mood and we have remained as part of that juncture from all the signs that were being given by the government of the United States, led by the Trump administration in relation to Cuba.

They began to intensify a series of restrictive measures, of tightening the blockade, of financial persecution against the energy sector with the aim of suffocating our economy and that this would provoke the longed-for massive social outburst, which would sow the possibilities to call for humanitarian intervention with all the ideological campaign that has been carried out, which would end up in military interventions and interference, affecting the rights, sovereignty and independence of all peoples.

That situation continued, then came the 243 measures we all know about and finally it was decided to include Cuba in a list of countries sponsoring terrorism, a spurious, illegitimate and unilateral list adopted by the government of the United States, believing itself to be the emperors of the world.

Many countries suddenly submit to these decisions, but it must be recognized that others do not allow them to be imposed on them. All these restrictions caused the country to immediately cut off several sources of foreign currency income such as tourism, travel of Cuban-Americans to our country and remittances. A plan was made to discredit the Cuban medical brigades and the collaborations of solidarity provided by Cuba, which brought in an important part of the foreign currency.

This whole situation caused a situation of shortage in the country, especially of food, medicines, raw materials and inputs to be able to develop our economic and productive processes which at the same time contribute to exports. Two important elements are cut off: the capacity to export and the capacity to invest resources. And from the productive processes to develop goods and services for our population.

We also have limitations in fuel and spare parts and all this has caused a level of dissatisfaction, together with accumulated problems that we have not been able to solve and that came from the special period together with a fierce media campaign of discrediting as part of the unconventional war that tries to fracture the unity between party-state and people; that tries to put the government as insufficient and incapable of providing welfare to the Cuban people and that tries to raise from a position of the government of the United States that with them we can aspire to the progress of a country like ours.

These are the usual hypocritical prescriptions, discourses of double standards that we know very well throughout the history of the United States towards Cuba: how they intervened in our country, how they appropriated our island in 1902, how they maintained their domination of our island during the pseudo-republic stage and how those interests were beaten by the Cuban Revolution in its triumph?

They have been very annoyed for 60 years by the example of the Cuban Revolution and have been constantly lashing out. They have applied an unjust, criminal and cruel blockade, now intensified in pandemic conditions, and therein lies the manifest perversity, the wickedness of all these intentions. A blockade and restrictive actions that they have never taken against any other country, nor against those they consider to be their main enemies.

Therefore, it has been a policy of viciousness against a small island that only aspires to defend its independence, its sovereignty and to build its society with self-determination in accordance with the principles that more than 86% of the population has supported in the broad and democratic exercise that we held some years ago to approve the current Constitution of the Republic of Cuba.

In the midst of these conditions comes the pandemic, a pandemic that has not only affected Cuba, but the whole world, including the United States. It has affected the rich countries and it must be said that in the face of this pandemic neither the United States nor those rich countries had the capacity to face its effects at the beginning, and in many of those first world countries, with much more wealth, the health systems and the intensive care wards collapsed. The poor were disadvantaged because there are no public policies oriented to the people for their salvation, and they have indicators in relation to the confrontation of the pandemic that have worse results than those of Cuba in many cases.”