Cuba On the Eve of Another Attempt at Colour Revolution: A Special Dossier 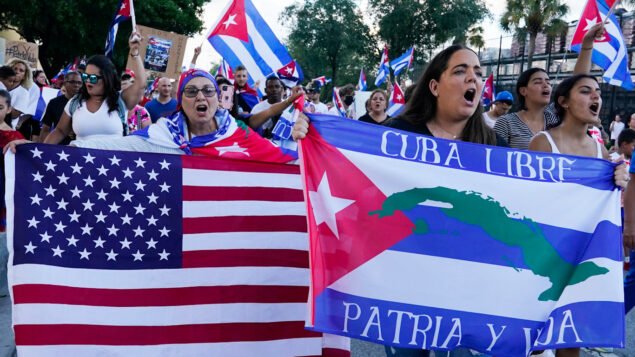 Floridians from Cuba’s ex-pat community in Hialeah, Fla., shout during a protest against the Cuban government, July 15, 2021. Marta Lavandier | AP

This dossier, compiled by Arnold August for the New Cold War website, illustrates the various specious attempts being made to undermine the Cuban government.

A major disinformation campaign is re-interpreting the current unrest in Cuba as anti-government, even claiming photos of pro-government demonstrations as anti-government. In fact, its causes lie in the 60-year old blockade, further tightened by Trump and continued under Biden, even during the pandemic. It is asphyxiating Cuba’s normal social and economic development. Cuba has weathered the fall of the Soviet Union and the Special Period that followed. How are the Government and people dealing with this new challenge?

The experts on this panel discuss the current situation, misunderstandings about it and what is really going on in Cuba.

US economic war on Cuba continues, even after war in Afghanistan ends

The Real News Network contributor Radhika Desai is joined by Arnold August to discuss the protests in Cuba.

As the 20-year war in Afghanistan officially came to an end, President Joe Biden justified US military withdrawal in an address to the nation on Aug. 31: “This decision about Afghanistan is not just about Afghanistan. It’s about ending an era of major military operations to remake other countries.” While these remarks suggest a potential reckoning with the longstanding US policy of imperialist intervention around the world, increased US sanctions on Cuba demonstrate that such intervention persists in the form of economic warfare. From the dire strain US sanctions have put on the Cuban economy to the corporate media frenzy that exploited protests in Cuba this summer as a justification for interventionist “regime change,” it is clear that efforts by the US to “remake other countries” are not ending any time soon.

TRNN contributor Radhika Desai is joined by Arnold August to discuss the protests in Cuba, the media narratives about the protests, and the prospect that the Biden administration will succeed in exploiting Cuba’s current troubles to achieve its interventionist ends. August is a Montreal-based author, journalist, lecturer, and the author of multiple books on Cuba, including Democracy in Cuba and the 1997–98 Elections, Cuba and Its Neighbours: Democracy in Motion, and Cuba–U.S. Relations: Obama and Beyond.

This extended version was produced by The Canada Files.

The involvement of foreign nationals in the domestic affairs of Cuba is on a level that can scarcely be conceived of in the United States.

Cuba Threatened With Another Attempt At A Color Revolution

In this segment of the podcast By Any Means Necessary, Sean Blackmon and Jacquie Luqman are joined by Arnold August, a Montreal-based writer, journalist, lecturer, and author of several books including “Cuba U.S. Relations: Obama and Beyond,” to discuss planned protests in Cuba and potential US involvement in planning them, the historical significance of the dates of the proposed national strike and protests, and the clues that hint at this being another attempt at a color revolution.