Cuba Confronting US-led Subversion: No Debate Within the Communist Party? 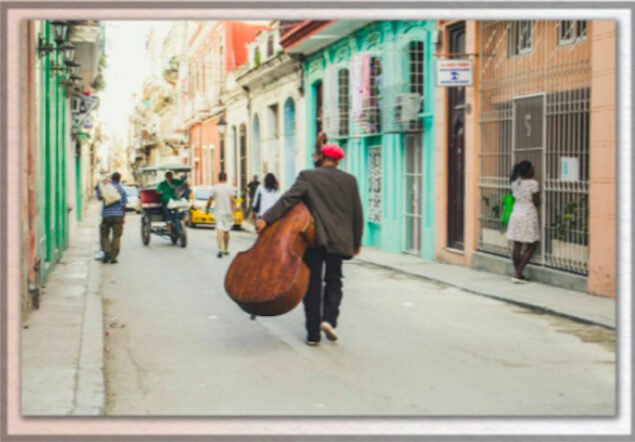 There is abundant evidence of direct foreign influence on the July 11 demonstrations. Yet a month later there is still a healthy debate going on, including opposing views among Cuban revolutionaries and Communist Party of Cuba members about its significance and how to interpret these unprecedented demonstrators.  The controversy to be found in an online discussion in Cuban pro-government media has been building up since July 11 to now.

There is abundant evidence of direct foreign influence on the July 11 demonstrations. Yet a month later there is still a healthy debate going on, including opposing views among Cuban revolutionaries and Communist Party of Cuba members about its significance and how to interpret these unprecedented demonstrators.  The controversy to be found in an online discussion in Cuban pro-government media has been building up since July 11 to now.

Anti-Cuban Government Cyber Warfare Originating in Spain, Argentina and the US

Expert cyber analyst in Spain Julián Macías Tovar points out that the operation made intensive use of bots and new accounts recently created for the occasion, intending to make a chorus for #SOSCuba. The bot is a software application that runs automated scripts over the Internet. Typically, bot tasks are simple and repetitive, much faster than a person could type text.  More than 1,500 of the accounts that participated in the operation with the hashtag #SOSCuba were created between July 10 and 11. The first account that used the hashtag #SOSCuba was one located in Spain. It posted more than a thousand tweets on July 10 and 11, with an automation of five retweets per second.

Tovar analyzed the more than two million tweets using the hashtag #SOSCuba that started asking for “humanitarian aid” given the increasing COVID-19 deaths. This campaign was spurred on by the participation of artists and thousands of newly created accounts and bots that produced mobilizations in the streets. Tovar points out that the campaign was carried out for artists to participate with the HT #SOSCuba.

There is a history of some artists in Cuba falling prey to hostile foreign appeals. Just in recent history last year, the San Isidro Movement (SIM) arose composed of “artists” and caught the attention of a foreign audience just as the July 11 events. It took place during the [US] election period era. The SIM used pro-Trump slogans such as Vote Trump! Invade Cuba!  It was not only financed by US democracy promotion programs, but it enjoyed the logistical support of the American Embassy in Havana who ferried some leaders to their encampment.

During the presidential elections last year, no one can forget Biden opposition to Trump’s foreign policy. However, Biden only stressed that Trump acted indecently, while Biden would bring decency back to the White House. Did this stop Biden from changing course on Cuba policy? We now know that the US Cuba policy is bipartisan. Thus, it should come as no surprise that on March 12, 2021, under Biden, Julie Chung, Acting Assistant Secretary of State, met with the SIM through an internet conference. She concluded:“We enjoyed an open exchange of views on free expression, assembly, media and culture.  [I] heard about the San Isidro Movement. We salute Cuba’s brave champions of democracy and human rights.”

On July 11, the first demonstration in San Antonio de Los Baños, a small town west of Havana was publicized in the United States by the account of one named Yusnaby with thousands of retweets, As Tovar points out:

“Curiously Yusnaby (Latin American pronunciation of Navy which pronounces the “V” as a “B”) is the account that comes out by far the most in my threads because it is one of the patterns of automated fake accounts that spread hoaxes and hate campaigns.”

So, I investigated him on my own. His real name is Eduardo “Yusnaby” Perez. He was born in Cuba and emigrated to the US. Not long after arriving there, he procured a job as a journalist with Cuba Net (financed by the CIA through the National Endowment for Democracy), Univision as the most important outlet in Spanish based in Miami and broadcast for Latin American residents in Miami and the population in Latin America and others.

The Argentinean Agustín Antonetti is a leading member of the right-wing Fundación Libertad. He is very active in the current #SOSCuba campaign. He has #SOS Cuba as his Twitter banner. Antonetti has been an active participant in the campaigns of hoaxes and bots in social networks against left-wing governments in Latin America such as the very moderate Mexican President Manuel López Obrador (AMLO). To indicate how extremist Antonetti is, on July 24, 2021, he attacked AMLO for his public position in defence of Cuba. AMLO said:

“”We can agree or not with the Cuban Revolution and its government but having resisted 62 years without subjugation is quite a feat. … For their struggle in defence of the sovereignty of the country, I believe that the Cuban people deserve the prize of dignity. And the island should be considered the new Numantia [an ancient Iberian Peninsula city that clashed with Ancient Rome] for its example of resistance. And I think that it should be declared a World Heritage site for the same reason.”

So, we have sources in the US, Spain and Argentina pushing #SOSCuba. Thus, on July 11, protests broke out with hundreds of thousands of tweets and the participation of many artists’ accounts. #SOSCuba became a global trend in several countries including the US.

The international corporate media then stepped in to amplify and make visible the #SOSCuba in print and television.

The Debate in Cuba: But Where are the so-called “Critical Communist” Groups?

In a recent telephone conversation with a colleague in Cuba who specializes in cyber warfare, he reports that in Cuba, 54.3% of the population use smartphones, 54,3% use social media 55.5 % and 68,0% have internet access. In response to a devil’s advocate question on the possibility that the important increase in internet usage in Cuba acts as a double-edged sword. He responded: “It can be said that although internet access has increased, that this is very positive, it also has the negative effect of providing, for the counterrevolution, access to the population, especially to the young people.”

To shed more light on the participation of ordinary Cubans on July 11, that is those that support the government but are exasperated, it was imperative to consult the pro-government website Cuba Debate. It carries articles that are not necessarily published in the official outlets such as the Communist Party of Cuba’s Granma. An article by the very well respected and famous Communist Party of Cuba (CPC) member Fabián Escalante was just what we needed. He is a Major General (retired) and former head of the Cuban Intelligence services. He is the author of several books on the US intelligence services against Cuba and has investigated the assassination of John F. Kennedy from the Cuban prism. Cuba is facing not only the open onslaught of the Biden administration but also the so-called “left” in Cuba. Speaking in the name of “critical communist” groups, they spread false rumours that these groups are repressed by Cuban President Miguel Díaz-Canel. The principal message however is that within the CPC there is no debate, that opposing views are not tolerated. Based on experience since 1997 in Cuba, this author can state without any hesitation, that if there is a country that not only allows debate, but fosters it, it is Cuba, and this includes within the CPC. Thus, the “critical communists” are most harmful because they give credibility to the US narrative that Cuba is a dictatorship, but from the “left!” What a godsend for the US.

In Escalante’s article entitled “Reflections on Cuba’s Reality,” his very first sentence initiates with a controversial statement. “The social outburst of the past July 11 of this year was, without doubt, a shock to all of us and not precisely for the lack of evidence and signs.” The mainstream Cuban media do not refer to July 11 as a ‘social outburst,” as this appellation indicates that many Cubans who are not against the Cuban government did participate.

The author then goes on to indicate the difficult situation caused by the spike in Covid-19 and the blockade. Another critical comment: “We should also add the difficulties in the necessary food and medicine supplies that cause long lines to get products, a new kind of mob that operates a black market born as a direct result, and the mistakes caused by the delayed implementation of economic measures approved long-ago, including food production.” Thus, in this last phrase, he highlights the reality of avoidable delays in reforms.

This follows another startling sentence by Escalante, which coincides with this author’s own experience in Cuba. He writes:

“Due to our insufficient political and patriotic efforts, there is a depoliticized young group of the population that cannot understand the need to resist imperial policies. They long to have a better life and cannot find a quick way to achieve their goals.”

While saying that “the United States and its fascist government are the first culprits,” he also asserts that

“It is essential to acknowledge that we are also responsible for the mistakes we made that demand a critical analysis, not only superficial allusion. We must deepen our knowledge of their reasons, their root causes, and how to solve them.”

Nonetheless, Escalante goes further in his critical analysis that “in November 2005, Fidel showed and warned us in a speech at the University of Havana that the Revolution itself could only destroy the Revolution.” He is referring to the speech whereby Fidel pointed out that the US on its own cannot defeat the revolution, it can only come to end by self-destruction from within as a result of Cuba’s own mistakes.

“The call to the revolutionaries and communists must be to move into action, to the front line of combat: to fight the counterrevolutionaries inside and outside the country, to fight bureaucracy and apathy. To fight what is wrong, to fight disappointment and distrust.”

A lot is being said about “eyewitness” reports from Cuba. However, does this eyewitness report and analysis by Escalante not qualify? He writes:

“The combat and confrontation of ideas are taking place today at the base of society, in the block [street blocks of several streets organized by the Committees in Defense of the Revolution], in the neighbourhood in the community. It is there where the Party and the social and mass organizations must and have to battle, not to oppress, but to convince, to explain, and if necessary, to inform the leadership of the Communist Party and the government about the difficulties, misunderstandings, and shortages.”

The debate is ongoing and merits the attention of the supporters of the Cuban Revolution all over the world.

Article in PDF format – Click on each to enlarge 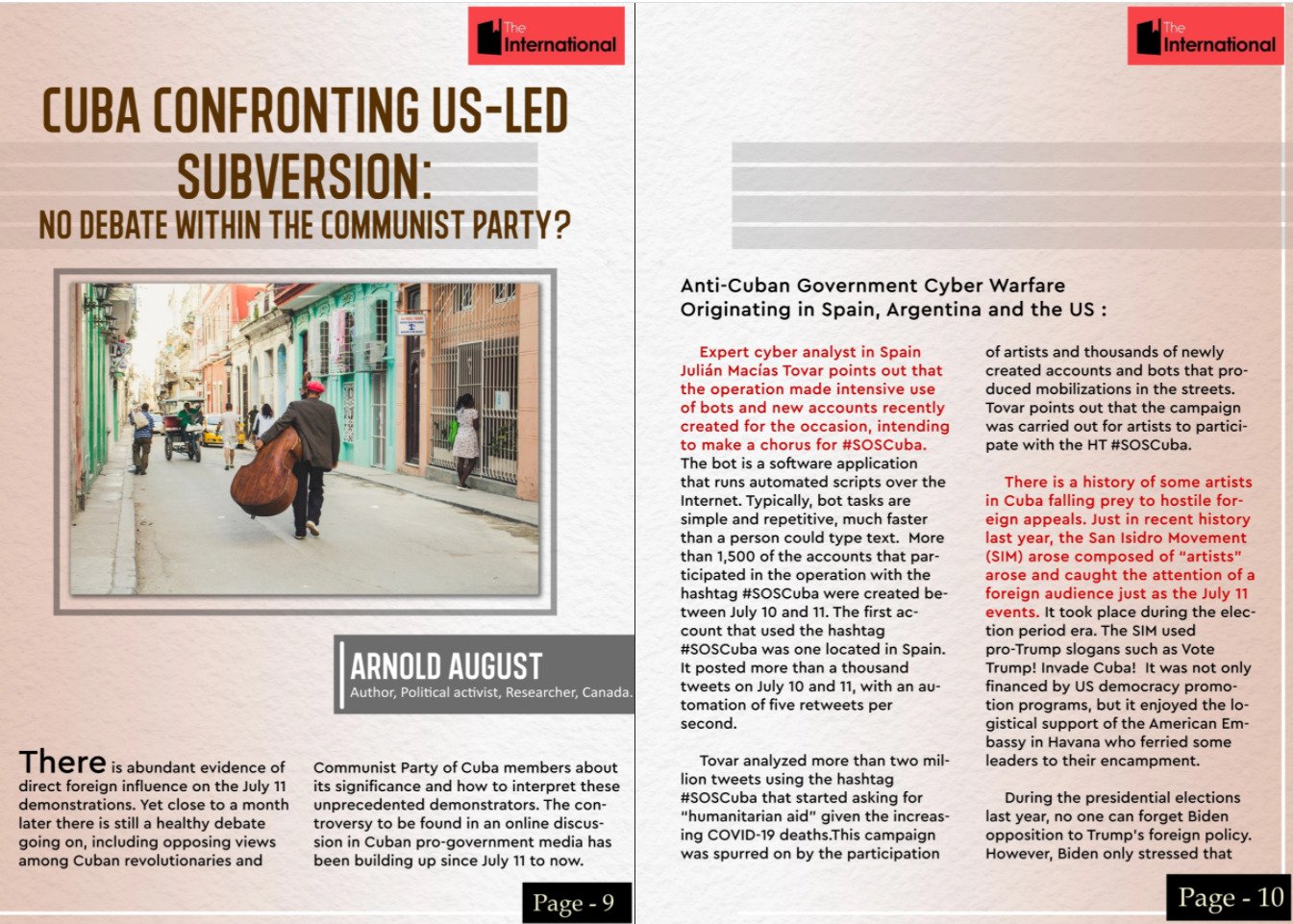 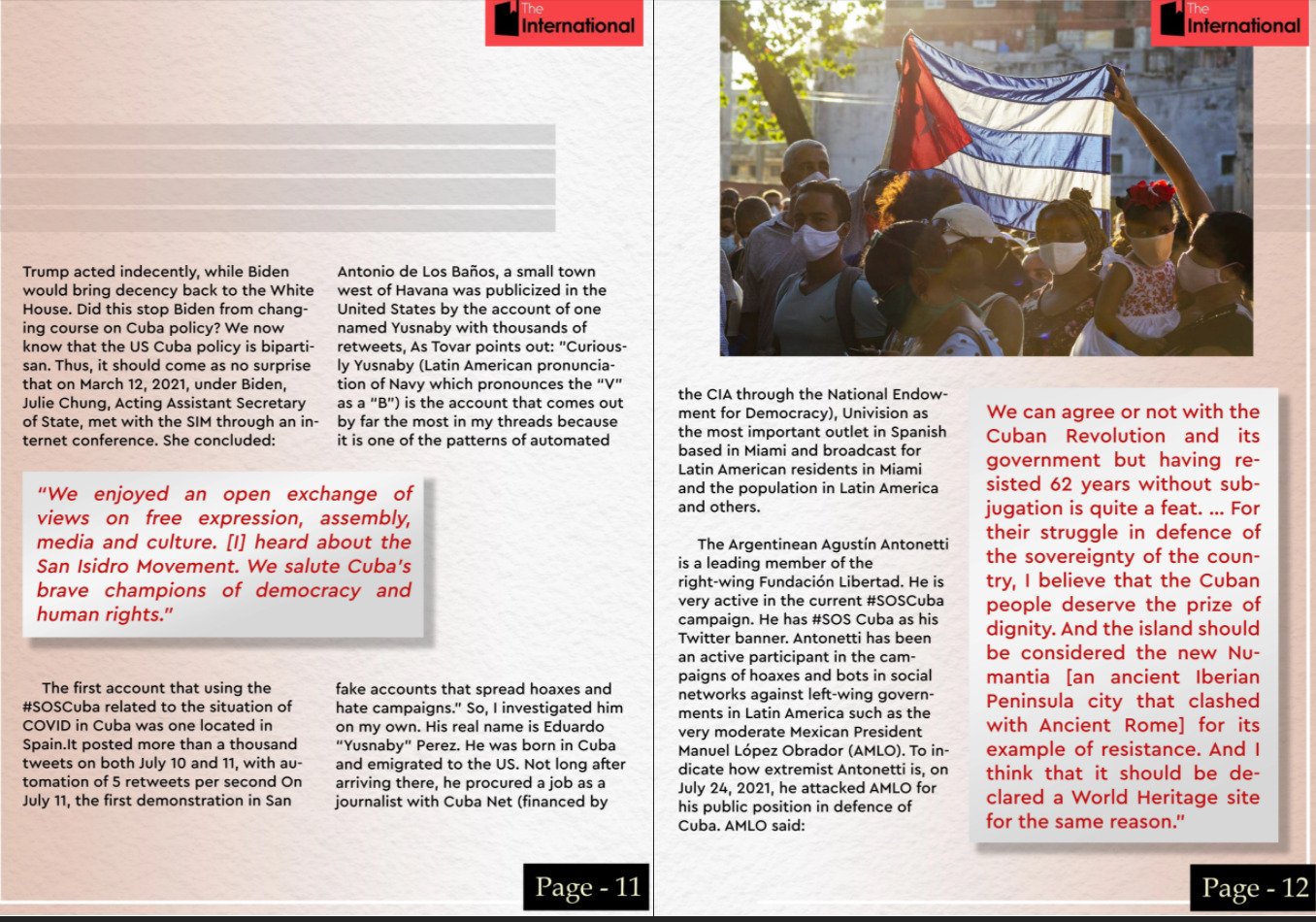 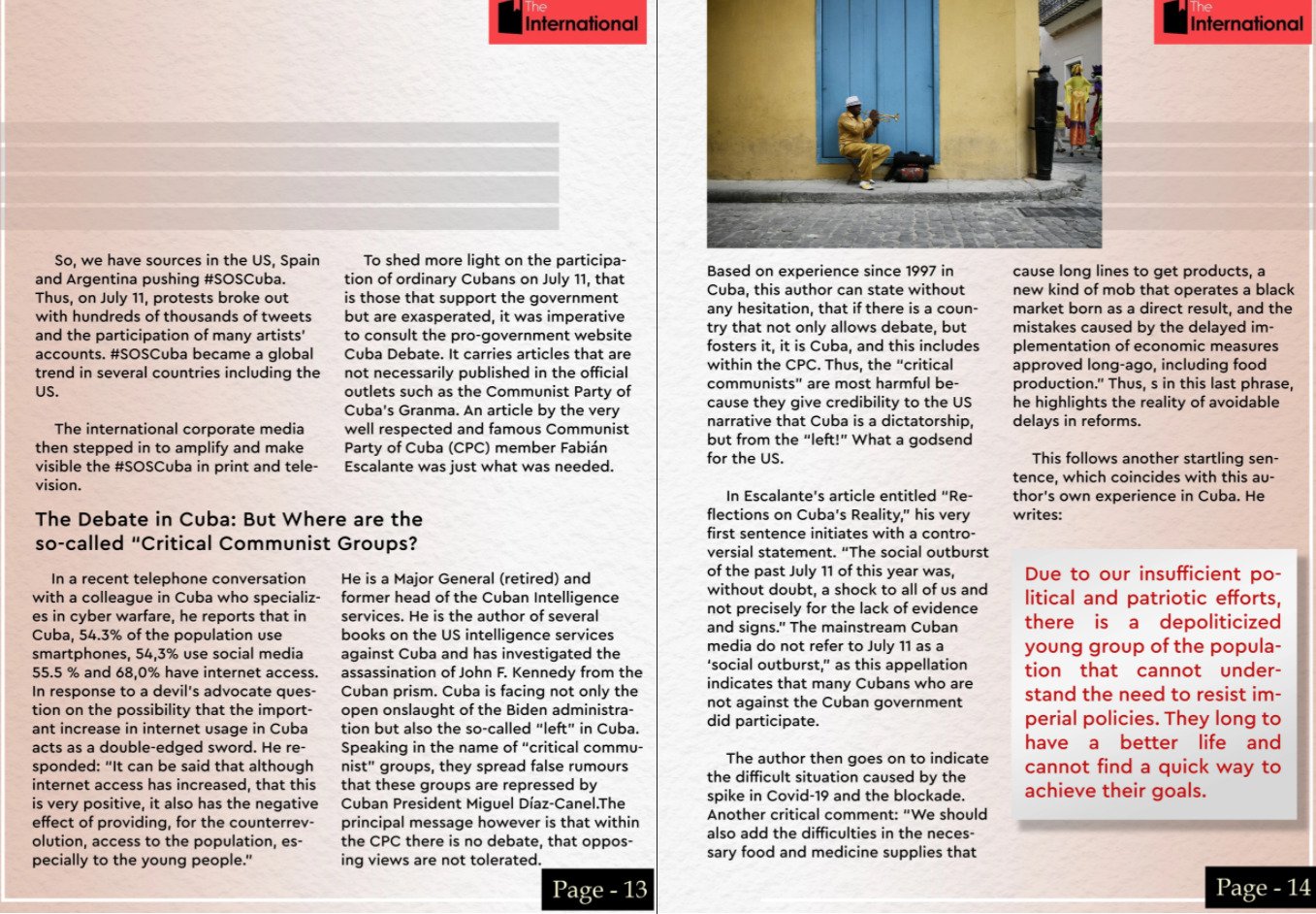 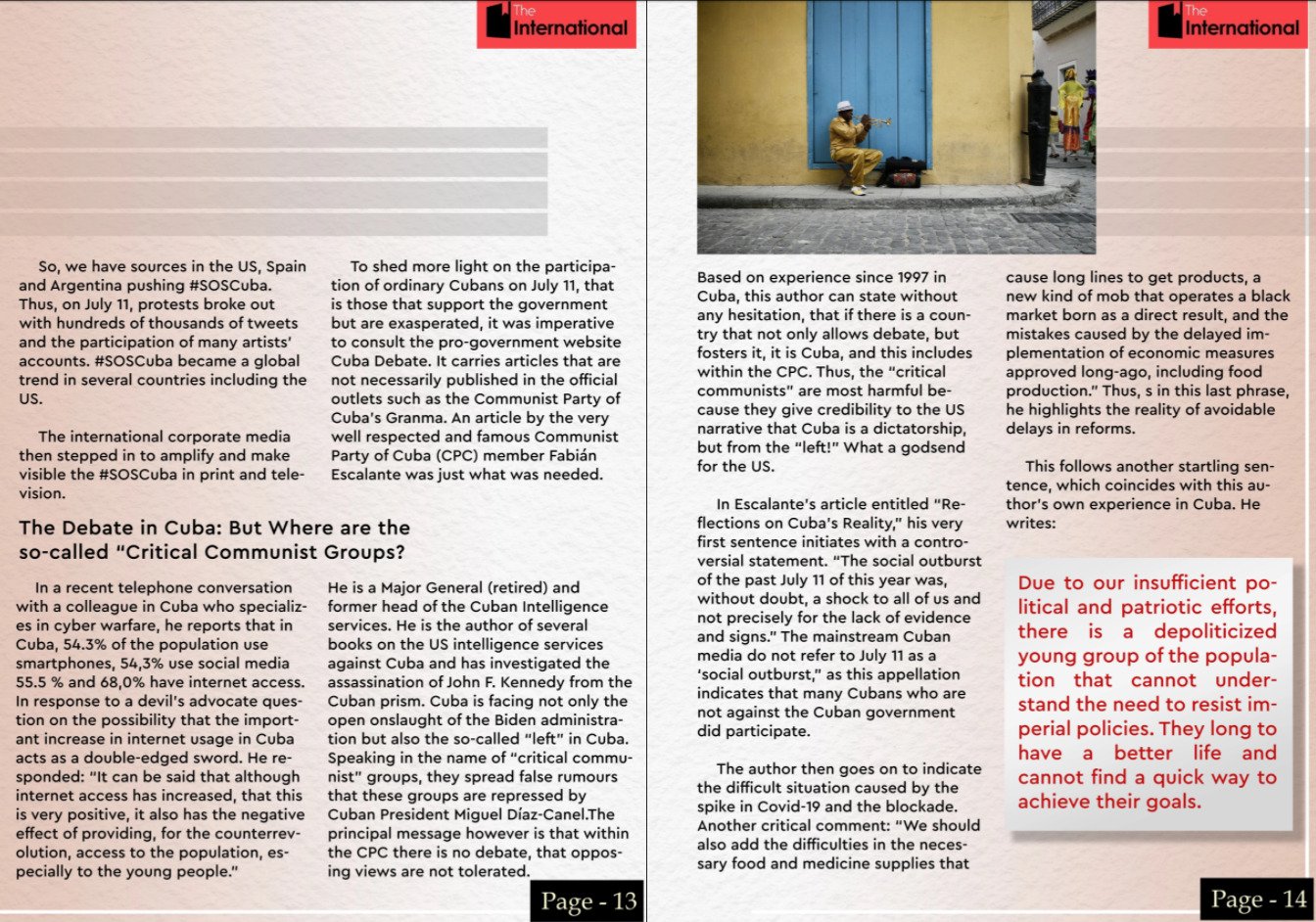