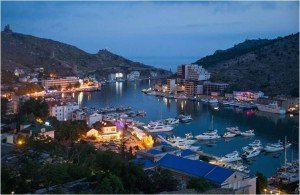 SIMFEROPOL–Russia’s payment bill for electricity supplies to Crimea from Ukraine’s territory may be adjusted by the end of the year, Sergey Aksyonov, head of the Crimean Republic, said on Friday.

The electricity bill adjustment depends on the time frame of laying a power cable from the Krasnodar Region in south Russia to Crimea along the bed of the Kerch Strait, the Crimean head said.

“The sooner we build a link and put the cable into operation, the clearer the figures will be at the end of the year,” Aksyonov said. “Talks are now underway. We are regularly blackmailed by our former partners [from the Ukrainian side],” he said.

“These are subsidies, which the federal budget transfers to us as the funds to compensate for the difference in tariffs,” the Crimean head said.

After an underwater ‘power bridge’ to Crimea from the Krasnodar Territory is built, the Russian Black Sea peninsula will be supplied with 800 MWt of electricity from mainland Russia.

The first two out of four power cable lines are scheduled to go into operation in late December 2015, which will allow Crimea to receive about 400 MWt of electricity.

The works to lay a power cable from the Krasnodar Territory in south Russia to Crimea along the bed of the Kerch Strait will start in August, Crimean Fuel and Energy Minister Sergei Yegorov told TASS on Thursday. “Actual works will start already in August. The projects have long been ready,” he said.

Ukraine is fulfilling all the agreements with the Russian Federation on supplies of electric power to Crimea, the Minister of Fuels and Energy of the Russia’s constituent Republic of Crimea, Sergei Yegorov, told TASS.

“All the agreements are being fulfilled,” he said. “We’re paying them and they are supplying electricity. No restrictions, no delays.”

On December 30, 2014, Russia and Ukraine signed two contracts for the transmission of electricity. One of them was between the Russian importer, Inter RAO, and Ukinterenergo company for the exports of electricity from Russia’s power grids to the Ukrainian power grids. The annual contact envisions deliveries of up to 1,500 MW of electricity per day.

Simultaneously, an affiliated company of Inter RAO, the Clearing Center (Tsor in Russian) signed a second agreement with Ukrinterenergo to ensure reliability of supplies.

Ukraine slashed supplies of electricity to the Republic of Crimea without a warning on several occasions at the end of 2014. To make up for the shortage of electricity, local power plants and generating units climbed to the peak of their output capacity and enacted gas-turbine generating power stations.

Yegorov also said authorities in Crimea have definitively renounced the idea of a nuclear power plant in the peninsular republic. “We rule out a possibility of building a nuclear power plant in Crimea,” he told TASS. “In the first place, this is very expensive. Secondly, there are other solutions to the peninsula’s electric power supply problems and we’re already implementing them.”

The project of the Shchelkinsky nuclear plant that was launched many years ago has grown obsolete, Yegorov said.
“The site where construction works were launched and where one power-generating unit was almost 80% complete is impossible to rehabilitate now,” he said. “These projects have outlived themselves today and they’re off the agenda. We’re not even discussing them.”

At present, Crimea gets the bulk of electricity it consumes from Ukraine, on the basis of an agreement signed at the end of last year. The republic’s own power generation stands at around 180 to 190 megawatts a day.
Commissioning of a new 470 MW power plant and reconstruction of the existing thermo-electric plants will bring the output of electric power in Crimea to 950 MW per day.

In addition to that, an energy bridge between Krasnodar territory and Crimea will make it possible to supply about 800 MW of electric power per day, Yegorov said.